How do offensive rebounding and transition defense correlate for the Oklahoma City Thunder?

The Thunder ranked 25th in offensive rebounding last season, but 11th in opponent fast break points per game. Instead of crashing the offensive boards, they got back on defense in an effort to contain the fast break. Was this a good tradeoff?

Share All sharing options for: How do offensive rebounding and transition defense correlate for the Oklahoma City Thunder?

Offensive rebounding isn't exactly the Thunder's forte as a team. In fact, if you were to look at last season's numbers, they averaged 10.3 offensive rebounds per game. That number put them all the way down at 25th in the NBA. On the other hand, they're a very good team in their transition defense. Even while playing at the 8th-highest pace per game, they only gave up 12.5 fast break points per game, the 11th-fewest league-wide.

Zach Lowe examined the correlation between offensive rebounding and fast break defense in a recent post over at Grantland.com. Long story short, there is no direct proof to show that aggressively crashing the offensive boards will always lead to a weaker fast break defense. The Pacers contradict that completely, able to rebound well on offense while shutting down opposing fast breaks simultaneously. However, it might simply differ from each team's individual approach to defending fast breaks. For example, the Spurs were one team (among multiple others that Lowe listed) that went out of their way to dismiss offensive rebounding, and succeeded in defending the fast break because of it.

What about the Thunder, then? Their approach to offensive rebounding and transition defense leans closer to the Spurs' than it does the Pacers'. It's interesting to see why this is, and whether or not it directly contributes to their strong fast break defense.

As a team, the Thunder don't place much emphasis on offensive rebounding. In a "standard" set-up (two big men hanging around the paint with three players out on the perimeter), the Thunder would just send the two bigs to crash the boards while having the rest of the team get back on defense.

In spite of some of the talent they had on the offensive boards, the Thunder tended not to be very aggressive with them. In addition to leaving just two bigs in typical set-ups, the Thunder ran a lot of plays which saw shots coming following high pick-and-rolls on the perimeter or with a big man spotting up in deep midrange. There were even plenty of scenarios where the Thunder had no bigs in or around the paint (small ball lineups or clear-out sets where they opened the lane for Westbrook or Durant to work in isolation).

With those big men hanging out in midrange, the Thunder generally didn't have them crash the glass. Collison was an exception to this rule as he loved to dive into the paint in pursuit of the offensive rebound, and Ibaka would occasionally do so as well. However, the Thunder normally pulled them back on defense as well, leaving just one big man to rebound (typically Perkins or Thabeet since they don't function as well away from the paint). In those cases with no bigs in or around the paint, the Thunder would occasionally just pull all five players back on defense without attacking the offensive glass at all.

In this play below, Ibaka is the big man jostling under the rim. The other four players are out in midrange or on the perimeter. As Westbrook puts the shot up, one can see that Perkins is left with an open lane to the rim (Dirk Nowitzki had been playing way off Perk out there). However, as soon as Westbrook takes the shot, Perkins has already made the decision to backpedal towards the other end of the court with the rest of the team minus Ibaka. Aided somewhat by a high bounce off the rim, the defense is back with plenty of time to spare and no fast break opportunity ever emerges for the Mavericks.

As for sending in the perimeter players to rebound, the Thunder didn't do that very much unless those players were already hanging around the rim. Normally, those players would typically just get back on defense. Westbrook would come in from the perimeter to rebound every once in a while, and he was a solid offensive rebounder for a guard, with a 4.8% offensive rebounding rate (reasonably well above league-average across all positions). Of course, many of his offensive rebounds also came off picking up his own misses at the rim. Thabo Sefolosha and Reggie Jackson are also worth mentioning as backcourt players that will take a sniff at rebounding every once in a while, coming in from the weak side to pick up a rebound here and there (offensive rebounding rates of 3.2% and 2.6% respectively, below the benchmark average of 3.7%).

Interestingly, Kevin Durant wasn't a player that hit the offensive glass very often. One would think that, at 6'9" and as the Thunder's leading rebounder (total rebounds) whom often played as their second-tallest player on the floor, he would grab at least a decent share of those rebounds. However, his rebounds almost entirely came at the defensive end (7.3 per game at that end compared to just 0.6 offensive boards), and his offensive rebounding rate of 1.8% was guard-esque. In fact, that rate tied such players as Steve Nash, Mike Conley, Luke Ridnour, and curiously, teammate Kevin Martin.

With the Thunder, the advantage of sending all of those players back on defense is clearly visible. By typically sending no more than two players to rebound on offense, they'll have at minimum three players running back (with as many as four or the entire five) to defend the fast break. It certainly also helps that they employ their share of mobile big men in Ibaka and Collison, who run back on defense very well for big men, and the Thunder take full advantage by running back early. Look at these screenshots showing where the team is when Martin takes the three versus where they are two seconds later when Blake Griffin has the rebound (Westbrook dives in for the rebound in this instance): 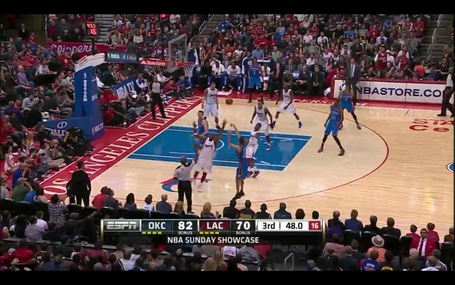 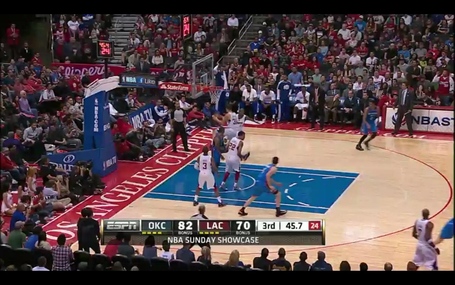 With as many players back on defense early as the Thunder regularly do, they're capable of eliminating plenty of fast breaks early. By the time opponent corrals the rebound and gets it in the point guard's hands, most of the Thunder's players are already back on defense. At that stage, there's no real fast break opportunity for the opposing team.

When they do allow fast break chances, the Thunder also do a good job of contesting fast break layups due to having the bodies back on defense to get in the way of attacking players. Having players like Ibaka able to run back on defense and contest the shot at the rim is very helpful, and the Thunder are also set with plenty of talented individual defenders (Sefolosha, Westbrook, Durant) able to put a body on ball-handlers right away. They're actually the 6th-best team in defending the fast break according to Team Rankings, allowing just 1.539 points per fast break possession.

Admittedly, the Thunder do struggle from the occasional mental lapse where they leave a shooter open on the three-point line or forget about the trailing player. However, that's less a function of the effect offensive rebounding has as much as it is simple decision-making on defense.

While other teams may go about it differently, the Thunder are a team that have clearly benefitted by defending the fast break through passing over aggressive offensive rebounding. Their approach to fast break defense revolves around getting back early and having the numbers to dissuade a fast break for the other team or at least make the opportunity a difficult one to convert. It worked for them, just as it's worked for the Spurs, the Heat and the Celtics.

The next step, of course, is to put it all together into a championship. If it works for the Thunder, then that's one way they can make their voice heard for those looking at the correlation between offensive rebounding, transition defense and winning.