Russell Westbrook is forging ahead in his career both as a basketball player as well as a fashionista.

(Updated with video & additional comments below)

Russell Westbrook is a force of nature on the basketball court. We know this. He is also a "devil may care" fan of fashion apparel. We know this too. It makes total sense than that Westbrook would be a central figure in this year's Fashion Week in NYC, and the NY Times does a great piece on Westbrook's evolution from a shy kid in high school to a self-assured hero to the world of high fashion.

This is a challenging story for me to read because while I am close in proximity with Fashion Week physically (I live about an hour away from the Lincoln Center) and as I'm sure you've already guess that I only do my WTLC writing while wearing Brooks Brothers (because I go for the more classical look), I am light years away from what we've come to know as high fashion. I don't comprehend it in the same way that I do not comprehend astrophysics, the popularity of Justin Bieber, and baseball.

That said, I take nothing away from the people who do because it seems like a lot of fun if you're into it, as long as you maintain a healthy dose of perspective. Even more-so, I especially like the fact that Westbrook is creating his own public identity as part of the Thunder. I think back to famous NBA duos like Jordan and Pippen or Shaq and Kobe Bryant, and for each, Pippen and Kobe struggled to carve out their own public identity for a long time, instead begrudgingly living in the shadows of their more famous counterparts. In OKC, Westbrook is his own brand completely apart from Kevin Durant. I think this bodes well for the both of them as they carve out their place in the league.

I read this Times article with great joy, and I now bring to you my favorite bits, while keeping in mind this quote from Vice: "Zoolander is pretty much a documentary."

Update1: Let's re-start this with a video of Westbrook talking about the experience.

The thing that I find most interesting and endearing about Westbrook in watching his personality unfold is that we, the spectators, are now challenged with reconciling the kid who wants to tear down the rim and annihilate opponents with the kid who is genuinely having a ball growing into his fashion element. With the way that he talks about his mom, you can tell this is something the family has enjoyed as a part of their personal fabric for a long time. What we see today is the continuation of it, not simply a suddenly wealthy pro athlete trying too hard to transform himself.

- Great start to the article here:

There he was last Friday, in the front row at the Rag & Bone show — in a blue-print, long-sleeve shirt, olive trousers cuffed into capris and a felt bowler hat — as paparazzi swarmed around him and his seatmate, Anna Wintour.

- Apparently The Bieber was there. Seriously, something needs to be done about this kid. (I'm sure I could recruit Drew Magary to help). But then again, look at that guy. He's a perfect fit for Fashion Week.

Having learned by now that no fashion show starts anywhere near its announced time, waited in his parked S.U.V. until seconds before the first model came out and then dashed to his seat across the room from Rihanna, Justin Bieber and Rashida Jones.

The Gear of Russell Westbrook 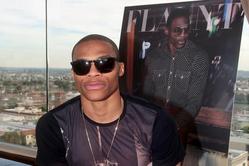 Check out how Westbrook is helping change the face of the NBA with his bold style.

- Westbrook has a subtle dig at some of the other fashion-minded NBA guys.

When he arrived in the N.B.A., in 2008, Mr. Westbrook said that, clothing-wise, "nobody was doing anything that would attract the fashion crowd." (Well-dressed league veterans like Dwyane Wade, Tyson Chandler and Amar’e Stoudemire might disagree.)

Since Chandler is a fan of capes, I'll give him the benefit of the doubt.

- Apparently Westbrook is a bit of a clothing maverick. I know, I am as stunned as you are.

Mr. Westbrook stands out for his daring color and original print selections, said Matthew Bedard, editorial director for Flaunt. "He’s not taking direction from someone else," he said.

- Apparently Westbrook is a hit with the pros:

Backstage was another story, Mr. Chai said, where "all the male models were in a frenzy over him."

My goodness, I can only imagine what this must have looked like.

- Apparently Westbrook is the equivalent to a model renowned for popularizing the "heroin chic" style.  I think Westbrook deserves better than that.

Ms. Demling has pronounced Mr. Westbrook the "Kate Moss of the N.B.A."

- Westbrook still owns the suit that he wore to the 2008 NBA draft:

It was during the draft process that he met the people at Levi’s, who had set up a booth at the event, and Ms. Alba (the N.B.A. introduces draftees to tailors and brands, he said), who made his relaxed fit gray pinstripe suit. "I still have the suit at my house," he said.

I'd love to see him bust that out when people are expecting something crazy and have people ogle at his fashion daring-do.

- Finally, we have a name for these pants. Apparently an entire thing happened with men's pants fashion and has now come and gone. Drat, maybe I'll pick it up the next time it swings around in 20 years.

I take it back. I kind of hope "drop-crotch capris" never swings back to men's fashion. I don't think I could wear those without feeling like I was in a diaper.

Lastly, I can't help myself. I too was greatly impressed by the Costanza collection, although I don't think I can pull off the uniboot look.