Big League City, Part III: David Holt discusses the OKC bombing, the future of the city, and a new identity for Thunder fans

Sarah Rogers concludes her expansive interview with Oklahoma State Senator David Holt. In it, Holt reflects on the impact of the 1995 bombing, what it means to the city, and where they will go from here.

Share All sharing options for: Big League City, Part III: David Holt discusses the OKC bombing, the future of the city, and a new identity for Thunder fans

Today we conclude our 3 part interview with Oklahoma State Senator David Holt. In part 3, Holt discusses the future of the city, the impact of the 1995 bombing, and how the people of the city can look forward to a bright future.

You can find the previous segments here:

Do you think OKC will ever have an NFL team?

"I think the economics of the NFL would work anywhere. There are eight Sundays [in a regular season], played on a weekend, and people will travel hundreds of miles away and make an event of it and do it eight times a year. Oklahoma IS football, but some people will say, "Oh it'll never work, because people will never give up OSU or OU football." However, I think people love the NFL, so they'd be able to support all three and they would find a way to support the NFL.

"Having said that, I don't think it's realistic because the NFL can't keep a team in LA, one of America's top two cities, so we wouldn't get much interest in trying to get a team to come to OKC. We are going to get spread thin on corporate support if we have any kind of second team. I think people from Charlotte will tell you that they should have just stuck with Hornets. They wanted not one but two teams, so they persuaded the NFL [to come] after they got their NBA team.But now both teams have kind of been lackluster through the years and it would've been better to focus [on one team]. Even if [the team] were in Tulsa, I just think that we need to focus our whole state's corporate resources, because so much of the money that goes into a team is really corporate or individuals and I think everything needs to be focused on one franchise.

"And there are two more challenges. The first is that we don't have a stadium and Dallas just set the bar on that. Theirs cost a billion dollars, and we're a conservative low tax state. It wasn't easy to get neither the original sports arena passed nor the second one. 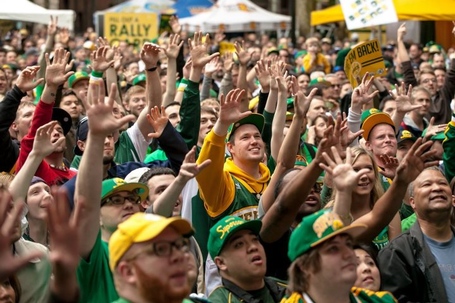 "In 2008 the voters of OKC added another penny for another 15 months to fix up the Ford Center. To pay for a football stadium would take a decade of a penny sales tax, and that's just unrealistic to think voters would support that. The last challenge would be the Cowboys. They wouldn't want to see an NFL team in OKC. This has always been their market and they are going to fight that. If it were in Tulsa the Kansas City Chiefs would fight it. Anything is possible in 100 years, but I always tell people who often ask me that question about whether or not OKC should go after a second franchise - I always say not in a generation. Focus on the Thunder for a long, long time. I don't count the WNBA in Tulsa to be a threat. I think that's been great. It's not a minor league sport, it's a top level of play for that sport but it's not one of the top 4 sports leagues. I think any team from the other 3 leagues would do great damage to both franchises here and I think we need to focus on what we already have."

At the beginning of one of your chapters, you briefly discuss the bombing of the Murrah Building in 1995. While you note its significance as an inflection point, you don't spend a lot of time writing about it. Was that intentional, and if so, why did you choose not to highlight it more?

"I'm on the board of the National Memorial. Very interested in the topic and I consider it one of the most important days in our city's history. It's just not a positive day. Everything that has happened since the Bombing, history will judge as sort of a comeback from it. Of course, real life is different. You do things every day, you live your life, and these historical threads are overlaid on those facts. As an example of that, a lot of people think MAPS passed after the bombing, but that wasn't the case. MAPS passed two years before the bombing, but the implementation happened after the bombing. When I write about the moment the team is about to tip off in 2008, I bring you to Steven Taylor, who is sitting near Clay Bennett at the game. Taylor was at the time Chief Justice of the Oklahoma Supreme Court, on the Bombing memorial board, and presided over the Terry Nicholas trial in McAlester as a district judge. And I relate how at that moment he felt that this was almost a culmination of our comeback from that horrible day.

"It's obviously a defining moment in our city's history, and history will attempt to make arguments that these great things that happened were sort of a response to it. There are a lot of people who have written about the Bombing. I did mention that it happened and I think I chose words that certainly communicate how important it is in our city's history, but in terms of going into the details of what happened with McVeigh, there's just a lot of sources for that. I put a lot of thought into how I handled the Bombing in the course of the story, and in terms of words, it's kind of brief but also opens the chapter. The words I chose were intended to communicate how important it was, but in terms of getting into details, there are other sources for that."

What are your thoughts on Thunder GM Sam Presti taking potential players to visit the memorial?

"It's part of who we are as a community. If you are ranking the [prominent] days in OKC history, the bombing is going to be number two or three, not in a good way, but as a measure of the impact it had on our community. The Land Run is No. 1, while the Bombing and the arrival of the NBA to OKC were numbers two or three in terms of how they molded our community.

"Presti is on the [Memorial] Board too, and everyone in the community agrees that it's a great thing that he does that. It makes us more than just another stop for a lot of NBA players, especially for the ones who get traded a lot. I'm sure they almost stop caring where they are playing, and it's all about playing ball and making money. They get less and less connected to the community they are playing for, and I think it's important to the organization that players don't come here and feel that way. Instead, they want players to come here and feel connected to OKC because that connection is good for the team's on-court play and certainly good for their relationship with the community. All of those things are connected to each other, good for business, good for team morale and good for the community, when we all feel like we know each other. If the players aren't going to the Bombing memorial, then they don't really know us because that's part of who we are."

What kind of identity did OKC gain when the Thunder arrived?

"I think we gained the identity of being a relevant and large American city, and until that point, we kind of inherently knew that the rest of America did not consider us a place worth talking about, living in, visiting, and doing business in. Now we feel like we are rightfully part of any conversation in American life. That's what I think it did for our identity.

"I think in some regard we are still struggling to figure out other aspects of our identity. For example, people outside our city assume that everyone at the game would be wearing a cowboy hat. What usually strikes visitors as surprising, almost more than anything else, is that we are a city.They think we're some kind of big cow town. [However,] that's also what attracts people. We have the Cowboy Hall of Fame and the stockyards. From a tourism perspective, that's what people want when they get here. They want cowboys and Indians and we can give them that in museums, but we can't give them that in daily life.

"So our identity as a stereotype sort of comes into conflict with our reality. I think we still kind of struggle with how to present ourselves to the outside world because we aren't what they think we are, but for an economic reason we want to give them what they want [and expect]. If they are coming to town to see cowboys and Indians then we want to give them that.

"I think that's an issue completely separate from what the Thunder has given us. What the Thunder has given us is that blue ribbon and now there's nobody in OKC that really feels guilty of living in OKC. Whereas for a long time, people were sort of embarrassed if you were to run into your cousin on the east coast.You would have instinctively sort of badmouthed your own city, and that would have been part of the deal of living here. Now, it's totally different. People walk with their chests puffed out all around the world and they feel great pride living in OKC."

Many thanks to Mr. Holt for being so gracious with his time and for his desire to help us understand the city and the team's history and their enthusiasm for the future.