Ibaka made 20 threes last season. He barely made 20 shots from 16 feet out in his rookie season. How did his jumpshot develop to this stage in the span of four quick years?

It has been a gradual development, but Oklahoma City Thunder fans have unmistakably noticed the improvement of Serge Ibaka's jump-shot over time. In his first three seasons in the NBA, Ibaka grew from a hesitant perimeter shooter to a reliable midrange threat. His improvement reached new heights last season as Ibaka began to show a consistent three-point jump-shot that we hadn't seen before.

Last season, Ibaka made 0.3 threes per game on 35.1% shooting. After making just two threes in the first three years of his career, he exploded for 20 triples this past season on what was a pretty solid percentage, all things considered. For comparison, Chris Bosh, widely considered one of the better 3-point shooting power forwards, made only 21 3-pointers this past season and shot 28.4% from beyond the arc.

Ibaka's calling card will probably always be as a shot-blocker, but he's carved out a niche role offensively with his jumper and improved range. For a long time, it was a work in progress, and it probably still is. However, Ibaka has already done an incredible job just in developing his jump-shot to what it is now. For the Thunder, Ibaka has become a legitimate and reliable weapon.

Let's look at two of Ibaka's shot charts as a rookie. The first one is a shot distribution chart and the second one is a shot performance chart, both courtesy of NBA.com: 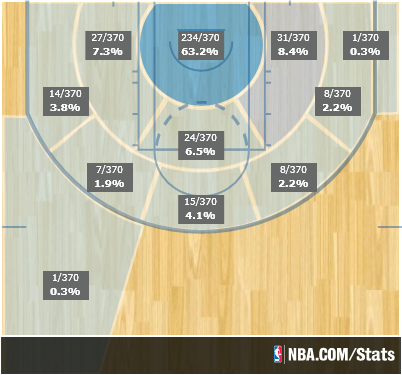 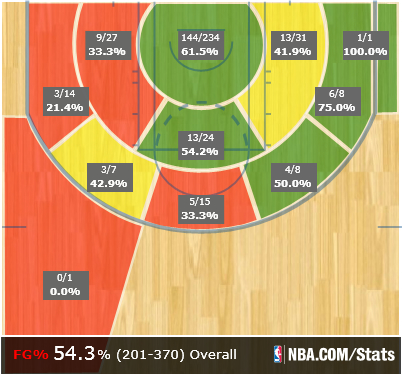 As you can see, Ibaka seldom used his jump-shot in his rookie season. Most of his shots came at the rim, and 22.2% of his shots came from 10-16 feet (the second tier of hot spot zones around the basket). Shots from 16 feet to the three-point line, a much deeper part of midrange than the previous zones, accounted for just 14.1% of his field goal attempts.

Though used sparingly, Ibaka showed a glimpse of a reliable jump-shot, which was plenty enough for a rookie big man. While he struggled with consistency, he did manage to shoot above league average (represented by the green zones) in some areas, even if his attempts in those areas were a little scaled back compared to other areas. For the Thunder back then, this was something they could take and continue to develop going forward.

Let's move on Ibaka's second season, the 2010-11 campaign. Once again, take a look at the shot distribution chart: 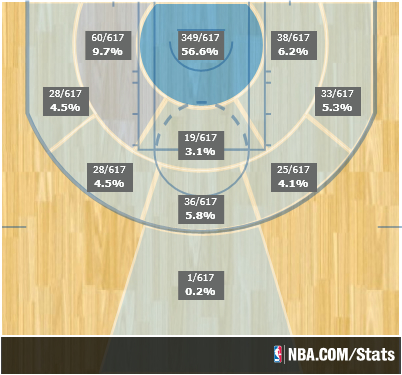 The most notable aspect of Ibaka's jump-shot in this season was how it saw a greater percentage of Ibaka's total shots. While most of the zones are still the lightest shade of blue (meaning below league average), Ibaka attempted significantly more midrange shots from in between 16 feet and the three-point line. This season was when you could see Ibaka begin to establish real trust in his jump-shot, and Ibaka's attempts in and around the basket fell to just 56.6% of his shot attempts compared to 61.5% in the season prior.
This time, I left off the shot performance chart (which you can still see here). For the most part, there were no significant changes in his efficiency on midrange shots overall in the 2010-11 season. While he took more jumpers and made more of them as a result (which would naturally increase his confidence), his actual percentage of outside shots made remained mostly similar, albeit in different zones.
Let's skip past Ibaka's third season, which was the one that saw the least amount of progression on Ibaka's jump-shot. The most notable change in this season was in the slightly increased percentage of shots he took from 16 feet to the three-point line, although this was offset somewhat by a decrease in shots taken from the 10-16 feet zone. His efficiency fluctuated a little, increasing from 16 feet to the three-point line but decreasing slightly in the 10-16 feet zone. At any rate, these were more of a continuation of last year's development rather than a significant point in the process.
Instead, let's move on to last season, which was by far his best season as a shooter. Here are the shot charts: 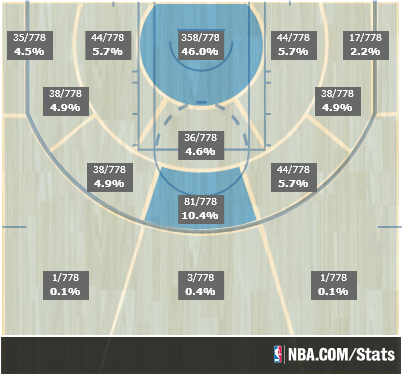 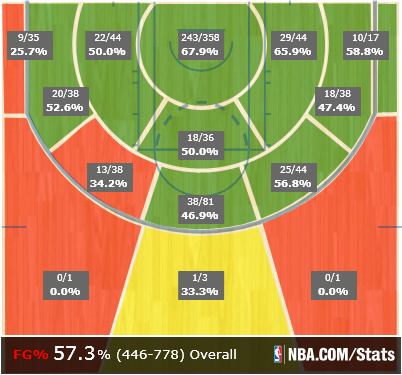 This season was a huge step forward for Ibaka's shooting. The shot distribution was significantly closer to his second season than his third, though at this point, there's been a significant increase in volume of shots overall. However, there is one thing that jumps right out at you–three-pointers!
As we all know, Ibaka added the three-point shot to his arsenal, and this was concentrated almost exclusively in the corners. A corner three is the shortest three-point shot there is, and Ibaka shot 36.5% on them. Obviously, you can see the extreme difference between his three-point shot on the left corner versus the right corner, but it remains to be seen whether that's a simple fluke or a genuine preference to a certain side of the floor. Interestingly, the Thunder chose to set up Ibaka twice as many times in the left corner vs the right, even though Ibaka is a much, much stronger shooter in the right corner, making one more 3-pointer but with 18 fewer shot attempts. This is a potential area for the Thunder coaching staff to examine in order to maximize Ibaka's scoring potential.
It didn't stop beyond the arc, however. Inside the three-point line, Ibaka raised his percentages significantly. They're all above league average except for the left wing, and most of them are above 50%. After average consistency at best in the past few years, he stepped it up significantly to very strong percentages.
At this point, Ibaka has become a reliable and valuable offensive weapon for a team that already has Kevin Durant and Russell Westbrook, two of the league's most elite scorers. His ability to catch-and-shoot draws his defender, typically a big man, away from the hoop. This gives his star teammates more space to work with closer to the rim, and if Ibaka's defender ever dares to switch off of him, he's fully capable of making the jump-shot.
This potential reaches its peak when Ibaka spots up in the corner (especially off of in-bounds plays), maximizing the amount of space between him and the rest of the court. Ibaka isn't mobile enough to cut through baseline screens or try to lose his man through misdirection, but he simply spots up in the corner and doesn't move. If he's open, he gets the ball. If he's not open, then that means he's doing his job right and his defender is just as isolated from the rest of the floor as he is.
Watch the following video demonstrate this to full effect, as Ibaka spotting up in the corner leaves Joakim Noah too far away to help on Durant and cover Ibaka at the same time. It leads to an open Ibaka three, and it might even have been too much space for Noah to get to Durant in time to significantly contest the layup.

Perhaps the most beautiful aspect of Ibaka's shooting game is how convenient it is to slot into a team with two established scoring options. Ibaka lives almost entirely off of his teammates, which is a necessary thing since both Westbrook and Durant accumulate high usage rates. 89.6% of Ibaka's made midrange shots outside of the paint were assisted upon, and this went up to 95.0% on threes (just one of twenty made three-pointers were unassisted on all season long). A player with a subtle catch-and-shoot mentality like Ibaka makes a perfect offensive complement for any team, and the Thunder have the gifted offensive talents that Ibaka can thrive upon.

Moving forward, it'll be interesting to see what the next step is for Ibaka's shooting. It's hard to imagine his midrange game developing any further from its strong showing last season, and hopefully a step back isn't in the cards. As for his three-point shot, it stands to reason that the threes will continue to grow into being a bigger part of Ibaka's game last season. Whether this comes in the form of higher attempts, increased efficiency or a significant combination of both is what we'll be watching for.
I'm personally inclined to believe Ibaka is shooting more threes one way or another next season, after seeing the same thing happen with his midrange jumper. Certainly, I expect him to have the confidence in his three-point shot to take more than "just" 0.7 threes per game. The 35.3% percentage he shoots now is already decent, so anymore more than a modest leap might be a bit much to expect at this moment. That said, he might take some more threes in areas outside of the corners, as he only attempted five threes past the break in the three-point line.
Perhaps the only concern would be for Ibaka to falter now with his shot selection, and start hoisting up ill-advised jumpers. It takes a wise basketball player to maintain his composure when the shots are falling, and Ibaka needs to be able to understand that even if the threes start falling in volume, his success as a catch-and-shoot player is directly tied to his teammates. If he's trying to put up his own big-time scoring numbers, he's taking shots away from Durant and Westbrook against a defense adjusting to his greater shot volume. With that said, I buy into Ibaka and his understanding of the team concept. He hasn't shown any indications of being a Brandon Jennings-esque gunner yet, and I simply don't see Ibaka as that type of player.
Instead, continued progression, which is all we've seen so far from the 23 year old Ibaka, should continue to be the theme. As the likely third scoring option going forward, Ibaka will be an outstanding offensive complement to Durant and Westbrook. If all goes well and the threes can come along the way his midrange shot has come along, the Thunder could find themselves with a devastating offensive trio. Put that together with Ibaka's outstanding shot-blocking defensively, and that's a very strong core to have.
Really, the Thunder could be in for something special as a team. Without question, Ibaka's development as a shooter will be one of the more subtle narratives to keep an eye on next season. The payoff could be enormous for an Oklahoma City Thunder team which is still looking for their championship rings.

The Growth of Serge Ibaka