The Thunder didn't see too much change during the offseason in their bench for next year. How will Scott Brooks deploy this group, and what kind of production should we expect?

Share All sharing options for: The Oklahoma City Thunder Bench: an overview

Russell Westbrook, Thabo Sefolosha, Kevin Durant, Serge Ibaka and Kendrick Perkins. We know what the starting lineup for next season looks like, because we've already seen it last season. And, as we've already pointed out, the bench doesn't look too different either. Obviously, the Thunder lost a major contributor when Kevin Martin walked. That aside, though, the rest of our additions and subtractions are relatively immaterial for next season.

The Thunder did add a trio of rookies, most notably drafting the well-considered big man Steven Adams with the 12th pick in the draft. They also nabbed forward Andre Roberson at 26, and traded with the Blazers for the 40th pick, forward Grant Jerrett. Finally, they signed veteran forward Ryan Gomes to fill out the roster.

Realistically, none of these moves figure to make much of an impact for next season. The hope is that Adams eventually develops into a capable role player for a contending team, and the same goes for the other two rookies. That said, none of them are polished enough to see a big role right away–even Adams might see 8-10 minutes at most, if he even plays at all. Gomes might see some playing time if Scott Brooks does, well, Scott Brooks, but it's hard to bet on him after spending last season in Germany following no NBA interest.

How does the depth chart shake out? This is my early guess:

There are a few spots in the rotation that could end up being determined by training camp battles: backup small forward and backup center. Brooks seemed to show a bit of trust in DeAndre Liggins after Westbrook went down in the playoffs, and Liggins proved to be an intense defender. He'll have to contend with Roberson and Gomes for playing time, but it's unlikely Roberson's a better option at this stage of his career. Gomes, playing on an unguaranteed contract and relegated to spending last season in Germany as we've already covered, isn't exactly a better bet.

At center, Hasheem Thabeet and Daniel Orton both return. Thabeet saw playing time over Orton last season, and it'd take improvement from Orton to leap over Thabeet on the depth chart. However, Thabeet's 11.7 minutes per game last season weren't exactly much to speak of. If Steven Adams proves to be capable of playing those type of minutes (or at the least, can prove himself more deserving than the unimpressive pair of Thabeet or Orton), then the Thunder will likely hand Thabeet's minutes from last season over to their young lottery pick and let him develop in those limited opportunities. It is also possible that Adams' role will grow over the course of the year, while Thabeet's diminishes.

Thunder players will need to step up to keep up 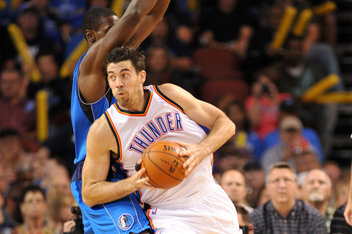 How are Thunder players going to collectively evolve this upcoming season?

Regardless of who wins those training camp battles, however, it's very unlikely that there's much playing time lying ahead of them. "Small ball" (uptempo basketball without a true center) is becoming increasingly popular in the NBA, and the Thunder played their share of small ball last season. Because of how well small ball suits their player personnel, we could be in for more of it this season.

What that means exactly is, we could see more three-guard lineups flanked by the 6'10" Durant and either Serge Ibaka or Nick Collison. This lineup sacrifices a center for an extra guard and more speed on the court. The four of Russell Westbrook, Reggie Jackson, Derek Fisher, Jeremy Lamb and Thabo Sefolosha represent an interchangeable three-guard lineup capable of bringing up the ball while also being able to defend opposing wings. Durant has height and speed that allows him to match up with big men favorably, and both Ibaka and Collison are capable of being the biggest player on the floor who rebounds and defends the interior.

In regards to the rotation, this works out well as it allows the Thunder to play more of their best (their guards and power forwards) while playing less of their worst (their backup small forwards and centers). The three-guard lineups are capable of eliminating the need for any of the small forwards on the bench to play more than 7-12 minutes a game. Similarly, a combination of zone defense, Ibaka's shot-blocking and Collison's basketball savvy should rule out the need for a center other than Kendrick Perkins to see the court any more often than what Brooks wants.

Looking at last year's most commonly played lineups, small ball was a pretty common theme as well when the Thunder began to dip into their bench. According to the NBA Stats site, three of the Thunder's five most often played lineups (excluding the starting lineup) saw a three-guard lineup made up of three of Westbrook, Jackson, Fisher, Sefolosha and Kevin Martin alongside Durant and one of Ibaka or Collison. These lineups generally performed well, posting a 49.3% field goal percentage and a plus/minus of +89 collectively.

Overall, the Thunder's bench was pretty reliable last season if not spectacular. Relative to the substitutes of the rest of the league's teams, they didn't make as much of an impact. According to hoopsstats.com, the Thunder's bench players were in the bottom ten of most stats (points, rebounds, assists, blocks) in terms of their averages per 48 minutes during the regular season. In reality, not much was asked of them. Durant and Westbrook did much of the heavy lifting, and the bench only needed to be solid. That they were, as the bench still played mistake-free and reliable basketball at the role player-level. They were in the top-10 for turnovers, steals, field goal percentage and free throw percentage (also finishing 11th in three-point percentage).

Next season could be more of the same. The Thunder lost a big producer in Martin, but Reggie Jackson and Jeremy Lamb are poised to take his minutes. If they pan out as hoped (expected?), there should be no major difference in terms of production. This group is so similar to last year's that we should really only expect modest improvement or regression, and it largely hinges on Jackson and Lamb's performance. In all likelihood, the Thunder's bench will continue to be solid and reliable, though not quite a game-changer that we saw during the James Harden years.

One specific concern will be three-point shooting. While the Thunder's bench shot well from three last season (36.4%), Kevin Martin took 58.4% of the attempts on his own, connecting on 42.8%. With him gone, the Thunder will be relying on three-point shooting from players like Derek Fisher (47.1% in the playoffs and 35.1% in the regular season), Reggie Jackson (30.2%, 23.1%), and Jeremy Lamb (35.2% in the D-League). Fisher's percentage in the postseason was gaudy, but his numbers from recent years would indicate that his regular season percentage is closer to the norm. He might be the best shooter of the trio, but realistically, he's much more likely to get 34-37%. That leaves the Thunder with distinctly average three-point shooting off of their bench, and possibly weaker floor spacing for Durant and Westbrook in isolations. As people like Zach Lowe have argued, the 3-point shot (in particular the corner-3) has risen in value. However, it is not purely a function of shooting percentage, but how many shots a team takes during the game. OKC was right in the middle of the pack last year at about 18 per game. Can they increase this production with their current crew?

With that said, we'll have to wait to see how it plays out this season. As I discussed in my last post on Martin, there really should be no issues for the Thunder in replacing Martin's impact from the bench as long as Jackson and Lamb can step up to offer production and, from Lamb most importantly, three-point shooting.

Smooth sailing going forward does seem like the best bet for the whole bench overall. Obviously, losing the proven veteran sixth man in Martin to replace him with two less proven players in Jackson and Lamb could be a bit of a concern, but every indication is that there should be no concerns. If what we saw in the playoffs last season was any indication, Jackson is ready for a 24-26 minute role. Lamb and Fisher should be able to compliment the Thunder as part of a small-ball lineup, and Nick Collison will keep chugging along as good ol' reliable. Those four will likely fill out the Thunder's regular lineup as part of what appears to be a 9-man rotation for now.

As we progress into next season, expect more of the same from the Thunder's bench, and from the team overall. All things considered, this is largely the same team as last season, and we should expect accordingly similar production. And, if that means another 60-win season, that's perfect.