No New Friends: Thunder players will need to step up to keep up

With no major additions this offseason to make up for the loss of Kevin Martin, the Thunder will rely on in-house options to make up the difference and stay on top of the Western Conference. Who will be responsible, and for what?

Share All sharing options for: No New Friends: Thunder players will need to step up to keep up

The Houston Rockets brought in Dwight Howard. The Golden State Warriors signed Andre Iguodala. The Los Angeles Clippers made a move for J.J. Redick and Jared Dudley. Even the Memphis Grizzlies traded for Kosta Koufos and signed Mike Miller away from the Thunder, who seemed to be in prime position to sign him.

Around the Western Conference, many of the top teams made moves to keep up with what has turned out to be a bit of an arms race. While the Los Angeles Lakers and the Denver Nuggets have taken a step back this offseason, just about every other team that made the playoffs in the West last season has gotten better. The only two exceptions to this rule might have been the top two seeds from those playoffs, your Oklahoma City Thunder and the San Antonio Spurs.

The Spurs and the Thunder have remained relatively quiet during the offseason. Their biggest moves for each team were the signing of Marco Belinelli and the drafting of Steven Adams in the lottery respectively. However, the main difference between the Thunder and the Spurs is that while the Spurs didn't lose anybody in free agency, the Thunder saw a major piece walk: Kevin Martin.

With K-Mart out and no new name to replace him, this casts a feeling of doubt on the Thunder's standing within the West next season. The Spurs kept everyone important and many other teams made upgrades. The gap between the Thunder, a 60-win first seed last season, and the other heavy-hitters in the West feels like it has narrowed considerably.

Has the gap really narrowed? Despite the loss of the veteran Martin, there's no conclusive evidence right now to believe that we're any worse of a team just because K-Mart moved on. The reason for that? Once again, Sam Presti has built this Thunder team so that it's poised to be able to make up for any lost production in Martin's departure simply by looking to in-house options.

What does this mean? Start at the top. Kevin Durant, Russell Westbrook, and Serge Ibaka are the nucleus for the team, and they will be responsible for continuing to step up to the plate to replace the production first lost by James Harden and then Martin. The biggest thing the Thunder have lost in Martin is an off-ball scorer whom the Thunder can curl around screens and set up for open catch-and-shoot threes. There's nobody on the roster who can replicate that skillset to the tune of K-Mart's 2.1 threes per game. No matter how many more Durant and Westbrook isolations we throw at opposing teams, losing Martin means losing that off-ball threat which is so valuable in balancing the court.

Durant and Westbrook can always score more, but as we saw this past season, it can lead to unbalanced scoring and large peaks and valleys in offensive production. Instead, the most important thing the pair can do is to put a more concentrated effort into pulling the defense away from their teammates so that good spacing quality shot opportunities continue to come for players not wearing a number 35 or 0 jersey. Serge Ibaka has grown in importance in this role, as his jumpshot now represents one of the more consistent catch-and-shoot options on the roster. The bright side of all of this is that Durant and Westbrook are just 24, and Ibaka is 23. They all have the ability to grow into these roles and thrive in them.

Of course, asking for three players alone to step up and make up for the entire loss of one player is difficult, especially when said players are already responsible for a large portion of what the team does. Instead, there will have to be someone to replace Kevin Martin, and claim the 27.7 minutes per game that Martin saw last season. 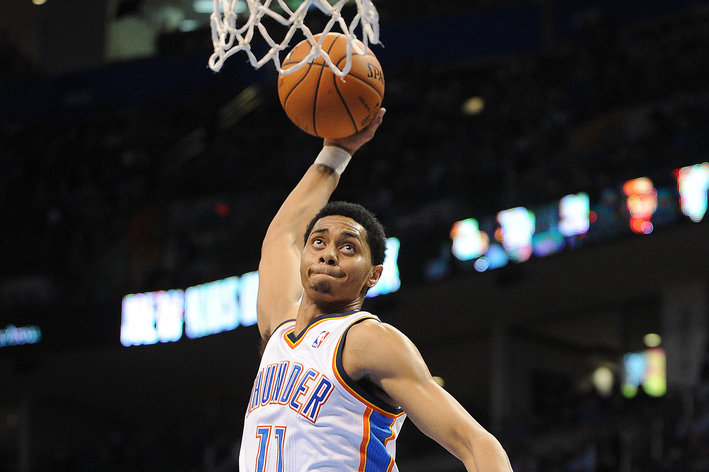 There are two names of interest here: Reggie Jackson and Jeremy Lamb. Both players are still very young (23 and 21 respectively) and learning the pro game, but there's a lot to like between these two players. Jackson was the player who got the opportunity when Russell Westbrook went down in the playoffs, and he did a solid job with averages of 13.9 points, 4.9 rebounds and 3.6 assists per game. To Jackson's great credit, he was unflappableagainst the Memphis Grizzlies' chaotic, turnover-creating defense. Lamb didn't play much at all last season, but was the 12th overall pick in the 2012 draft (acquired by OKC in the Harden trade) and has plenty of tools that can translate well to the NBA game. Both are very exciting young players on the come-up, and both figure to factor heavily into the rotation.

While training camp hasn't kicked off yet, the early expectations are that Jackson will be the sixth man this season. It makes sense, as Jackson really developed into that role last season after starting out as the third-string point guard. His ball-handling and run-and-jump athleticism make him a nice spark plug off of the bench, and he can give the Thunder a nice scoring burst. However, he's a wildly inconsistent shooter from outside (30.2% on threes in the playoffs). Jackson will need to improve his 3-point shot selection in particular; while he was solid from the corners, his long range shooting everywhere else was abysmal.

Which leads us to Jeremy Lamb. "Reliable" is an attribute hoped for but as of yet undetermined. However, we do know that Lamb can certainly spot up and shoot the basketball from deep. In 24 games in the D-League (21 regular season games and three playoff games), he averaged 1.8 threes. The efficiency is still a work in progress (a mediocre 35.2% on threes), but it's good enough for him to have a chance to play a crucial role for the Thunder, as the team's 3-point shot attempts are right at the league average. Even more of a concern will be whether or not Lamb's game as a whole will be polished enough for a more substantial role than just a shooting specialist. He'll have training camp to prove himself, and either way, it's likely he'll develop as the season progresses just like Jackson did last season. Even though Lamb is unproven at this point, one OKC trend stands out - players take huge steps forward in their 2nd season as the team piles on responsibilities. This was true for Durant, Westbrook, Harden, Ibaka, Jackson, and now hopefully Lamb.

Of course, regardless of what individual players can do, it'll be on head coach Scott Brooks to make something out of it. Losing that invaluable three-point specialist in Martin means Brooks will have to find some other way to get spacing on the floor for his star players when they isolate, as well as scoring options to lessen the bulk on them. Lesser shooters like Ibaka, Jackson, Lamb and even Derek Fisher will have to be juggled around to provide a similar level of production that Martin provided.

Another thing Brooks will be responsible for is providing a dynamic enough offense for when either Durant or Westbrook is out of the game. When Westbrook went out in the playoffs, Durant constantly saw double-teams and even triple-teams and precious few available plays to create any type of team-oriented offense. Brooks wasn't able to find consistent scoring from any of his other players. With Martin gone now, that's one less option to go to if faced with a similar situation on the court. Brooks can't play both Durant and Westbrook for 48 minutes of every game, and he will have to be able to run a capable offense with one or even both sitting out. Jackson's development will be important to watch as he's the most capable ball-handler they have on their bench, but Brooks' offensive schemes (which have seen plenty of criticism in the past) will need to be able to hold the ship steady when they can't just give the ball to Durant or Westbrook in an isolation.

For the first time in the Thunder's OKC history, a shadow of uncertainty hangs over the team's head. Since the fanbase has only experienced one trajectory - a bad team gets radically good radically quickly - the thought of having to take a step backward in order to progress forward is a journey through uncharted waters. With the level of talent OKC has, it's hard to imagine that the perception of them has suddenly shifted away from being a top contender in the league just because of the loss of one role player, but as stated above, the talent gap between the Thunder and everyone else has appeared to shrink.

What if Brooks can't keep up with what he faces as this team's coach? What if Jackson and Lamb aren't ready for the big time? What if Durant, Westbrook and Ibaka can't carry this team any more than they already are? What if, without that trustworthy scorer that they can sub in to relieve the starters, this team can't keep up with the reinforced Western Conference? There are have some really good players on this team and they could still be a top-3 contender in the NBA, but for the first time in a long time, there are serious questions surrounding the Thunder as they look forward to the season. We'll have to wait and see what answers they have.