Clips Nation decided to take a look at the Thunder and how they're no longer the biggest threat in the Western Conference. Alex Strouf decided to do the same.

Clips Nation has decided recently that the Oklahoma City Thunder are no longer the best team in the Western Conference due to the tepid offseason they have been experiencing. You can read that article HERE. 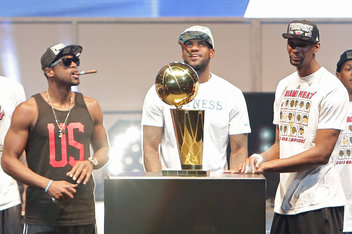 The SB Nation writers weigh in; who will be the best in the upcoming season?

I don't believe we have lost as much as the Clips Nation post implies. Gomes isn't a Kevin Martin, but he will be a nice replacement off the bench, and is likely looking for a final shot at finishing his career in the NBA. Reggie Jackson is going to get a good amount of time as well, so replacing Kevin Martin's offensive production will take some adjustments but will not be too difficult.

In the article, the author Steve Perrin states that last season, OKC was the best team in the Western Conference by far, until the loss of Russell Westbrook. Now, let me know if I am incorrect, but didn't OKC win the first round? Also, didn't the Clippers lose four games in a row to a five seed? Don't get me wrong, the Grizzlies are a good team, but we didn't have one of our two stars and we won one game while staying in every other game down to the wire, unlike the Clippers who had players like Chris Paul and Blake Griffin. So, Clips Nation is a little pissed off because of the power rankings and the fact that the Oklahoma City Thunder are ranked number-two in about fifty-percent of them.

Do the Clippers deserve to be higher than the Thunder? No, they do not. Clips Nation is acting like J.J. Redick makes them the number one title contender, even though it's the other way around; the Clippers might make J.J. REDICK A TITLE CONTENDER.

So, Clips Nation, we'll see you in the regular season, but until then, keep your keyboards to the Clippers.