If you don't know who Dwight Buycks is, listen up!

The Thunder went 10-15 from beyond the arc today. For their regular season team, that shooting mark seems like a distant dream. For the Summer League team, it is a exciting reality.

Who took part in this shooting gala? Well, the most notable success was Grant Jerrett, who shot an unbelievable 4-5 from behind the line. He finished with 16 points, which was higher than his college career high. Considering that the competition is better in the Summer League, that shows you how much he didn't want to be at Arizona.

Am I head over heels for Jerrett? Not yet. Every shooter gets hot, and we need to see how his percentages even out. But as I've said before, his main advantage is his ability to hit the three over slower defenders. He still has a lot of other aspects of his game to work on, though. In the post, he was routinely powered over by stronger defenders, and he didn't do enough to challenge shots in the mid-range. His rebounding was admirable, but he couldn't really do a whole lot with the ball in the post. His handling could definitely use improvement as well. All in all, he can shoot, but he needs to develop other areas of his game if he's not going to be a total liability.

The other two sharpshooters were Kyle Kuric and Jeremy Lamb, both of whom went 2-4 from the field. Kuric is a natural shooter and didn't do much else, so I won't waste time talking about him. Jeremy Lamb, on the other hand, is a puzzling case. Early in the game, he was really involved in the offense, stepping back for jumpers, drawing the defense, making great passes (including this one), and running successful iso plays. Basically, he was the shot creator we all hoped he'd be.

Lamb's success was short lived, though. Late in the game, he seemed to totally disappear and fold. He let Dwight Buycks run the offense and floated off into irrelevance on the wing. He wasn't nearly as inactive defensively, and failed to get going on the break. He did drive the ball a few times, but he did so poorly. It's pretty clear to me that Lamb relies way too much on the length of his arms, expecting to just shoot over defenders on the perimeter and drop in layups over defenders in the paint. That might work in the D-League, but in the NBA, you've got to get more creative in what you do. Lamb will learn that eventually, but it's disconcerting if he's going to fill a key role next year.

Someone who did end up impressing me last night was Dwight Buycks, the former 66er who spent the off-season in France. In last year's Summer League, he managed to score in bunches during his brief stints off the bench, but didn't provide much anywhere else. Today, Buycks went all out and proved himself as an assist man. It was amazing enough for those who don't know how he plays, but for how few assists he earned in Europe, the whole situation was totally bizarre. It was only one game and Buycks was surrounded by talent, but he did an excellent job setting everyone up and running two-man plays. Scoring-wise, he was quieter than usual, but he put the team on his back in the late going and scored three essential buckets that secured the Thunder victory. All I'll say is that if he can continue his high level of play, he definitely deserves a roster spot.

I'm sure you guys want to know about how Steven Adams did, and I will say that he wasn't totally disappointing. He only scored two points on that sick dunk I showed you earlier, but he did manage to play great defense lock down the paint early in the game. Adams drifted a bit in the third, and wasn't really a factor. Most worrying was how badly Adams missed a couple jumpers, including an uncontested airball. Despite all that, I'm not too concerned. When you consider that Plumlee is five years older than Adams and played four years at Duke, seeing Adams go toe to toe with him admirably gives you a lot of hope.

The last big story from the day that I haven't touched on is Daniel Orton. Orton had a pretty solid game, all things considered. He outplayed Miles Plumlee early on, working him into the paint and scoring some nice-looking buckets. It was clear that he knew how to use his strength to get to the hole, and had the touch to make most shots around the rim. He was a force in the paint, and nailed a couple of fadeaway jumpers. Overall, his early performance really helped to slow down the game and work it in the Thunder's favor.

Later in the game, it was a different story. Far from the basket, Plumlee faked him out a couple of times and got some easy scores. Plumlee also managed to steal an entry pass from him, and force him into some tough shots. He was still a great help defender and rebounder, but some aspects of his game seemed on and off. I'm not sure what to really make of him yet, but the results so far are promising. It's jut really a question of what he can do against higher-caliber guys. 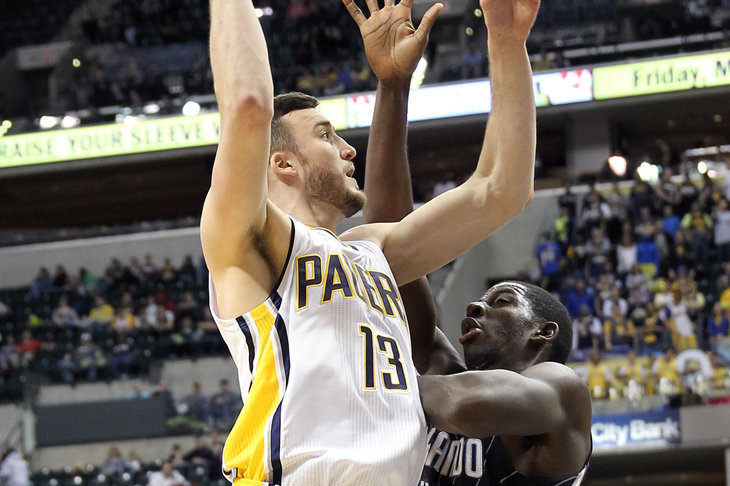 Johnson's offense inefficient, but he was almost completely absent on offense, barely touching the ball. That's a bit troubling. Andre Roberson was really active defensively and made a sweet reverse layup. What we saw was promising, and I'd like to see him in bigger minutes. Tony Taylor, the current 66er, is pretty clearly a step down from Dwight Buycks. He was having a hard time getting shots off, and he wasn't getting his teammates involved very well. Lastly, Ron Anderson, Jr. was the quietest guy on the court, but you could tell his heart was there if you looked. He battled for boards heartily and gave it all he had defensively, but he just didn't look like he was on a very high level. He did get fouled twice at the end of a disastrous third quarter though, so his hard work did pay off somewhat.

The Flow of this game waxed and waned. At times, it was a really exciting back-and-forth affair, with both teams draining threes and hitting layups. But other times, when the post players were at their peak, it became a defensive showdown, with both teams holding strict control of the paint. The Thunder relied a lot on the Orton and Lamb combo in the first, and it paid off, as they built a big lead. But the lead was whittled down in the second and third as the Thunder committed turnovers and the Pacers started canning threes. The Thunder eventually took over the game in the fourth with some excellent drives and passes from Dwight Buycks.

When it was all said and done, the Thunder won the first quarter, the fourth quarter, and the game. That gives them five points overall, and tied for third in the Summer League Standings.

Thunder Down Under: Daniel Orton

Next Game: Versus the Orlando Magic, Monday, July 8th, 10 AM Central Daylight Time

Let us know your thoughts on the game in the comments! And be sure to check out @WTLC on Twitter for instant analysis during all of the Summer League games this week!