"In Thunder's search for third point guard in free agency, there is mutual interest between the team and veteran Derek Fisher, source says. Fisher, 38, is one of several options OKC is considering. But there's history and "mutual respect" between the two sides, source says."

Here's a metaphor for what Derek Fisher does every season:

Let's break it down.

Secondly, Derek Fisher signs with the Thunder. There's no way he'll take minutes away from a young prospect, right?

Thirdly, Derek Fisher gets minutes and plays like garbage. There's no way he'll play in the playoffs, right?

Fourthly, Derek Fisher is on the floor in playoff crunch time. There's no way he's going to be relied upon for game winning plays, right?

SUDDENLY, AH-HA! Derek Fisher hits a game winning shot, makes a crafty pass, and takes a gutsy charge. Everyone loves him, and experts continue to scratch their heads.

We all know what a Derek Fisher signing would mean. He's going to be slotted up as a defensively overmatched shooting guard next to Reggie Jackson, and he will get minutes. And don't act like you know he's going to take some bench role. At every stop of his career, he's been most concerned about minutes and winning. Most telling is that he's not interested in being a coach, so I can see why sitting on the bench holds no appeal for him.

Look Back: how did we handle Derek Fisher 2.0? 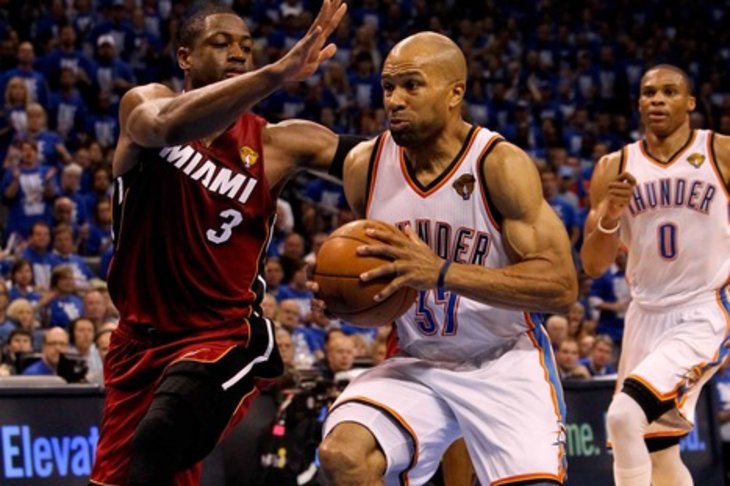 Would signing Derek Fisher be a good thing? No. Absolutely not. Playing Fisher wouldn't cut into Lamb's minutes, because he could just assume the recently departed Kevin Martin's role. But if the Thunder wanted to give some spot minutes to Perry Jones or Andre Roberson, those hopes would be dashed. Oh yeah, and it would kill any chance of playing Liggins or Brewer, two guys who I thought should have gotten minutes over him last year. Moreover, Derek Fisher posts terrible regular season stats, potentially hurting a team's record in a tough Western Conference. I could see signing him as an insurance policy, but there's no way Fish would agree to that. The only reason I would sign him is if the Thunder failed to get anyone else, and are really struggling on the bench come April.

What does the Thunder's interest in Fisher tell us? The tweets also said that the Thunder are looking for a third string point guard. In theory, we do need one in case Westbrook or Jackson goes down (knock on wood). But the reality is that the Thunder need to clear out more cap space if they want to sign more than 13 players and stay under the luxury tax. That's why they haven't gone after anybody in Free Agency. More than likely, the Thunder will continue to look at potential cap clearing trades. Considering how much the Warriors paid to clear some of their cap, the market isn't looking good.

Also to be considered is the fact that the Thunder, with non-guaranteed contracts, are currently at 15 players. The three draft picks have replaced Fisher, Martin, and Brewer. Thus, if Fisher is going to return, or anybody's going to join, somebody's going to have to go. Cutting Orton is always a possibility, but considering the tax situation, I think the Thunder's first option is to try and clear cap.

Does any of this mean that Kendrick Perkins will be anmestied? Nope. That would leave Thabeet getting heavy minutes, or throwing those minutes onto an unpolished rookie. Plus, Presti has already stated that it's not happening.

Once the Summer League is over, hopefully some light will be shed on this mysterious situation.

What do you think of a Derek Fisher re-signing? Let us know in the poll and comments!