A Glance at the Thunder's Five Year Splits

We look at who's good at beating the Thunder, and who's really struggled to make their mark. I'll bet you didn't know that five different teams have never beaten the Thunder in Oklahoma City!

Share All sharing options for: A Glance at the Thunder's Five Year Splits

The Thunder have existed for five years now. It might seem like a mere blip in time compared to the multi-decade history of the grander NBA franchises, but it's certainly long enough to produce some form of history. In these five years, we've seen dynasties rise and fall, and we've watched teams flip over their entire roster.

In the spirit of looking back, I thought I'd take a look at how well each team has fared against the Thunder overall. After hours of pouring over Basketball-Reference statistics, I made a table that showed each team's win percentage over the past five years, both overall and against the Thunder specifically. Here it is, for your viewing pleasure.... 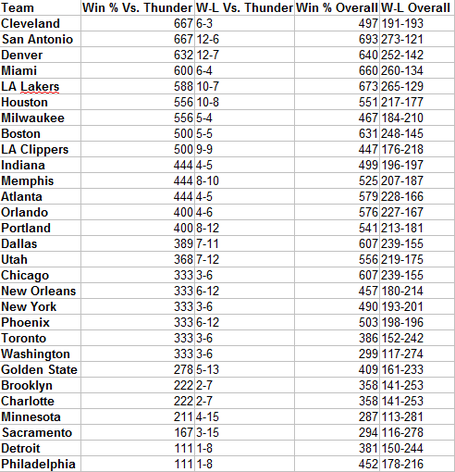 Here's a few interesting tidbits that I've gathered from the table....

What do you think of the Thunder's 5 year splits? Let us know in the comments!

*We previously reported that New York had never beaten the Thunder in Oklahoma City. Somehow, I missed the most recent game they played in January, where they did end up beating the Thunder. I apologize for the error. Thanks to rodneypr for pointing it out.