WTLC delves into whether he'll make the roster, and what type of role he might have on the team.

Share All sharing options for: 2013 NBA Free Agency: Breaking Down the Ryan Gomes Signing with the Oklahoma City Thunder

The Thunder aren't setting the world on fire with their off-season, and their latest signing has just confirmed what you already knew. No big splash will be happening in free agency, and the most excitement you can hope for is the return of Derek Fisher or a new training camp signee.

In all likelihood, that's what Ryan Gomes is. We don't know for sure yet whether his contract is guaranteed or not, but given the fact that he's been out of the NBA for a year and hasn't exactly dominated Europe, I'd say that most signs point towards not guaranteed. As Darnell Mayberry pointed out, the Thunder have pulled this maneuver before, signing Hollis Thompson to a non-guaranteed deal during last year's off-season.

The only thing that makes the Ryan Gomes signing unusual is his age and status as a player. Sure, the Thunder have signed old guys before. Etan Thomas, Royal Ivey, Kevin Ollie, and Derek Fisher all come to mind. But those players were all proven in the NBA, and likely had offers from competing teams. Ryan Gomes, on the other hand, is looking to redeem his career after two dreadful years with the Clippers. The only remotely similar acquisition is that of Ronnie Brewer, and even then Brewer was heading into the team with more street cred.

Ryan Gomes is looking to redeem his career after two dreadful years with the Clippers.

Whether Ryan Gomes has the ability to overcome his steady decline is anybody's guess. He was considered a legitimate role player about three years ago, stretching opposing defenses while shooting acceptable percentages for a mediocre Timberwolves team. He made the transition to a contender by signing with the Clippers in 2010, but he could never really find his groove off of the bench, and his shooting and rebounding stats took a huge dip. Last year, he was forced to sign in Germany.

While in Germany, he played for the Artland Dragons, one of the top teams in one of the better basketball countries in Europe. Gomes only appeared in about 8 games, but his 12.8 PPG average puts him around the caliber of Bostjan Nachbar or Robert Vaden, two names that should be familiar to Oklahoma basketball fans. The one area that's remained a problem for Gomes is his shooting percentage, which sits around 40% a game. His mid-range jumpers come in fairly frequently, but his terrible shooting from three really kills his efficiency.

Anyway, that's enough about his history. What type of player is Ryan Gomes?

As you could probably guess from my information above, Ryan Gomes is primarily a shooter. Even though he's listed as a power forward, you'll see him frequently hang around the perimeter and handle the ball. He's not a guy who can create his own shot, but he's certainly capable of shooting off the dribble. Much like Kevin Martin, one of his signature moves is the pump fake and side-step dribble that allows him to shake off over-antsy defenders. He'll also dribble the ball up the floor during a fast break, or even drive the ball if he's left uncovered.

Look back: Gomes works out for the Thunder 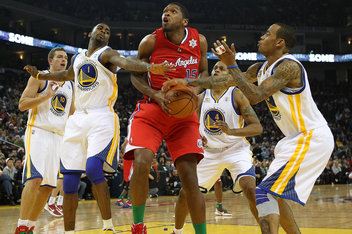 The main weakness of Ryan Gomes is his skillset combined with his size. If Gomes was a couple of inches taller and a little bit more athletic, he'd be an excellent power forward that specialized in stretching the defense. But he's not big enough to be a huge defensive factor in the post, and he doesn't get enough rebounds to really justify putting him there. At the same time, he's not skilled enough to be a small forward. He can only really drive the ball when the lane is clear, his court vision isn't very good, and he can't shoot over defenders. Thus, he's stuck as a tweener, and relies mostly on his ability to consistently hit shots while not hurting the team in other areas.

The main weakness of Ryan Gomes is his skillset combined with his size.

Another factor in Gomes' decline was his shift to small forward while playing for the Clippers. I noted above that he can't really play either position perfectly, but his weaknesses are a lot more visible when he plays there. He's simply not quick enough to compete with most small forwards defensively, and will get torched for a lot of easy shots. About the only type of small forward Gomes is suited to play against is Kevin Durant, mainly because of his enormous 7'2" wingspan. Offensively, it's a lot harder for him to grab open jumpers on the perimeter.

If all of the above weren't enough, Ryan Gomes can make some really frustrating mental errors. Every now and then he gets called for traveling or setting an illegal screen, things that could be easily avoided. He also a poor passer into the post, often lobbing the ball too short and allowing the defender to snatch it up.

I might come off sounding a bit negative. It's mostly because Gomes has gone from a 10 PPG scorer to out of the league in just three short years. But let's suppose that he does make the roster, and that he gets his game back to a 2009 level. What role would he have?

Realistically, I could see him getting time as the Thunder's 10th man. Their regular bench will most likely consist of Collison, Lamb, Fisher, and Jackson. Gomes would slot in as a fourth big man, allowing the Thunder to go semi-small, push the ball on the break, and not lose too much in the post defensively. He also would function as the elusive floor spacer that the Thunder have needed for years, provided that he hit his shots. He'd also make for a wonderful practice partner for Kevin Durant.

Gomes' opponents for that 10th spot would likely be Perry Jones and Andre Roberson, two other PF/SF tweeners. Jones might be a better scorer than Gomes, but Thunder fans have gotten to see so little of him that it's been hard to tell. Roberson, on the other hand, is probably the most adept defender and rebounder out of the three, but he has little to no offensive game.

At the end of the day, we're talking about a player who likely won't see major minutes unless there's an injury. Still, I look forward to seeing him compete against the young guns in training camp and the pre-season. Low risk, potentially high reward signings are what the Thunder are all about.

That, and really long wingspans.

What do you think of the Ryan Gomes signing? Let us know in the comments!

Ryan Gomes signs with the Thunder