Kevin Martin leaves the Thunder after 1 season and heads to Minnesota where he will be their starting shooting guard.

It is being reported this evening that Kevin Martin has reached an agreement with the Minnesota Timberwolves. Adrian Wojnarowski has reported that the former Oklahoma City Thunder shooting guard has agreed to a 4 year, $28 million new deal.

The departure of Martin leaves a quite obvious hole in the Thunder's line-up, as their shooting guard position went from James Harden, then to Kevin Martin, and now likely to an unproven and untested 2nd year player in Jeremy Lamb.

Martin's contract is similar to another shooting guard who just signed a new contract, J.J. Redick:

In the sign and trade scenario, Redick will get a four year, $27 million deal with the Clippers, sources tell Y! Sports.

Kevin Martin is the newest Timberwolf 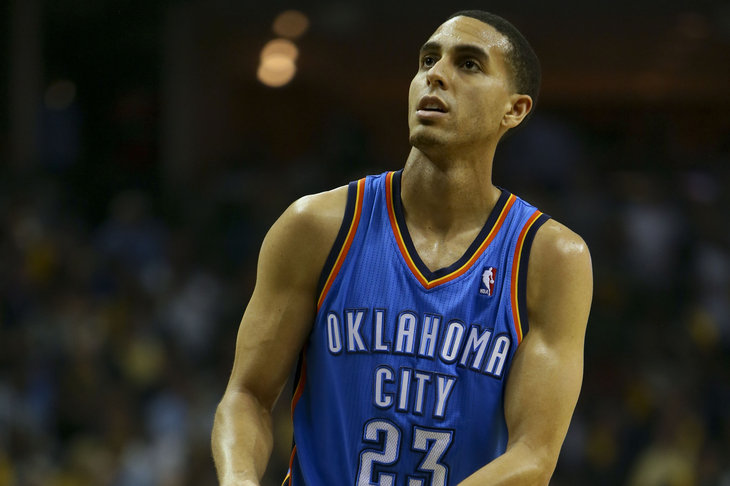 Canis Hoopus analyzes the Timberwolves' signing of Kevin Martin for 4 years and $28 million.

Martin was the Thunder's 3rd leading scorer this past season, where the team won an OKC record 60 games in the regular season, achieved the #1 seed for the playoffs, and then watched it all come crashing down when Russell Westbrook was injured and lost for the season. On the year, Martin averaged 14.0 points per game while shooting 45% from the floor, slightly above his career average. Martin also shot a solid 43% from 3-point range, which was a career best for him. However, Martin's point production was a far cry from the 23.5 PPG that he averaged in Houston two years ago. One of the biggest factors in the drop-off was Martin's inability to get to the free throw line, and he saw his FT attempts drop by nearly 3 per game as compared to last year.

Never the less, Martin, 30, believes that his ability has more room to grow in Minnesota under Rick Adelman, who also coached him in Sacramento and Houston:

"Martin told Sam Amick of USA Today that Minnesota was his first option outside of Oklahoma City. He felt he couldn't pass the deal up, especially with a chance to be coached by Rick Adelman for the third time in his career."

After agreeing to T-Wolves deal, Kevin Martin tells @USATODAYsports: "Minny was my 1st option outside OKC, so I’ve got to take it."

The loss of Martin is not unexpected in OKC, since he previously was making a cap-crippling $12 million per year while not matching the offensive production of the man he had infamously replaced, James Harden. Even so, Martin proved to be a good complimentary piece to the Thunder puzzle, showing adept ability to understand the Thunder offense and developed good rapport with the rest of the team. What might be a bit surprising is that he only ends up with an average of $7 million per year, a number that might not have been too high for Sam Presti, were they not already looking to replace Martin with Dorell Wright and hopefully 2nd year player Jeremy Lamb.

What this loss does mean for the Thunder is that they are now fully invested in the Lamb experience. It is totally unreasonable to expect him to come in and equate the 2012 version of James Harden. However, is it unreasonable to expect him to score 12 points per game off of 43% shooting and 35% from 3-point range? Because that is what Harden produced in HIS year 2, and if your memory is too short, his 2nd season was a bit of an adventure where numerous high level pundits were openly questioning whether the Thunder had blown their #3 lottery pick on a guy who seemed to do everything well but nothing great. Harden was a player who was very unsure of himself until the Thunder made their franchise altering trade for Kendrick Perkins, and then everything fell into place. Harden's career took off and they never looked back.

You never know when a player is going to be ready to sieze the moment, but one thing is for sure - he cannot sieze it if he is not actually ON the court. If Lamb is as close to being good as we think he is, this will be perhaps the best moment he has in his career to become a player who matters.

As for Martin, we bid him farewell. Perhaps we all knew from the beginning that his stay would be a short one, but his time in OKC was a net positive. He will be missed, but the Thunder train rolls on.