What can Dorell Wright provide? What do the Thunder lose if Martin walks?

The return of Kevin Martin to the Thunder appears unlikely, unless the market for him dries up completely and he has to return at a far lower rate than he's trying to find, league sources said."

Welp, as I predicted in a recent column, it looks like Kevin Martin is too darned expensive for the Thunder to re-sign. Is this a bad thing? On a larger level, no. The whole reason we don't have the cash to re-sign Martin is because a lot of it is tied up in draft picks right now, so I'd say that's a step in the right direction. But in terms of sheer immediate talent, Dorell Wright is a definite step down.

Is Kevin Martin done in OKC? 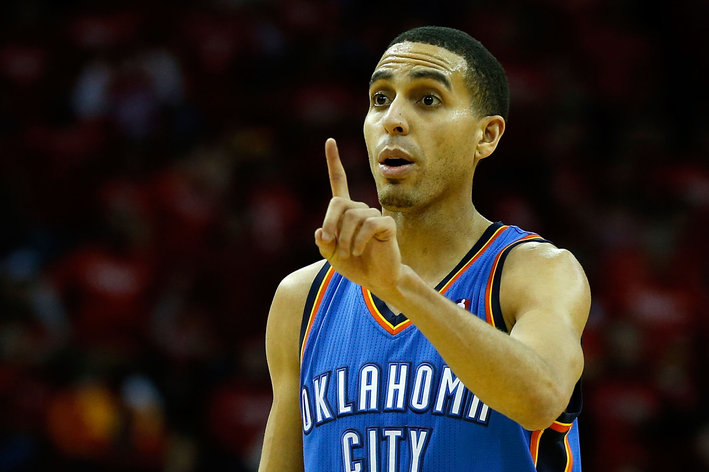 Stories indicate that the Thunder and Kevin Martin may both be ready to move on.

Why? Well, Kevin Martin, despite having limited ability to create his own shot, is a dynamic scorer. He can shoot from any spot on the floor, get to the line, and hit a variety of off-balance shots that a lot of other guys can't make. He runs within an offense well, and can even occasionally hit a shot in a man's face. His scoring ability is why a lot of teams are offering him money, seeing him as someone who can score easily when the pressure's on other guys.

Dorell Wright, on the other hand, can't do as much. He scores in two situations; transition and spot-up shooting. In terms of transition, he's athletic and fast, so he's the perfect guy to hit mid-stride on the way to the basket. However, he doesn't have the handling ability to get near the basket in the half-court, so he has to rely on other players for opportunities. Defensively, he's a step up from Martin, but so is 95% of the NBA.

Here's the good news: Dorell Wright is perfect for the Thunder, despite the step down in talent. Assuming he's coming off of the bench, he should see significant time with Reggie Jackson, Jeremy Lamb, Nick Collison, and Hasheem Thabeet. The first two are developing their scoring abilities, and will hopefully be guys who can consistently create their own shots when it's all said and done. Wright won't take opportunities from them, and should give them room to work. However, when the young guys are faltering, Wright can provide a veteran presence who knocks down a three when you need it most, pumps up the team with a transition basket, and doesn't totally kill you on defense. Plus, if he's having a hot shooting night, Durant and he would slot perfectly together as a 3 and stretch 4 in crunch time.

Boiling it down to brass tacks, Dorell Wright fills two very essential needs. For one, he provides the floor spacing shooter that's eluded the Thunder since Daequan Cook's departure. For two, he adds a bit of athleticism to the team, something the Thunder are going to need if they want to re-ignite their somewhat dormant transition offense.

What do you think about a potential Dorell Wright signing? Vote in the poll, post a comment!