Kevin Durant heads back to his old stomping grounds to promote his home town and announce the release of a new sneaker.

And if that little intro above doesn't clue you in to what this is all about, I don't know what to tell you.

Kevin Durant went home to a small suburb outside of Washington, D.C., a little place called Seat Pleasant (a City of Excellence), east of D.C. and lying in Maryland. Durant was unveiling the "KD 6," a special style that is an ode to Seat Pleasant. Behold: 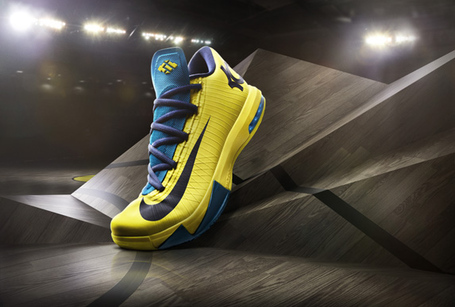 Joining Durant on his excursion/shoe announcement (well, joining only in the proximate sense) was Grantland's Rembert Browne, whom I am guessing has at least a passing familiarity with D.C., if not Seat Pleasant.

In fact, yours truly used to call the D.C. Metro area his home for quite some time, commuting into the nation's capital for a number of years. I actually had a nickname for that area of land that lies between D.C. and the Chesapeake Bay: The Dark Side of the Moon. 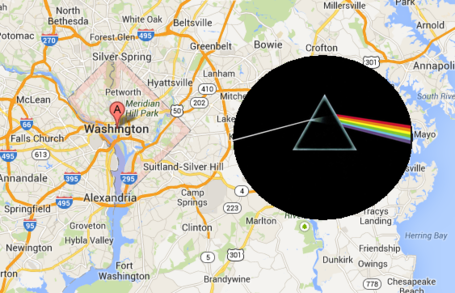 Seriously, I lived in the area for a decade and I have no idea what's out there.

At first I thought Browne was going to go heavy on the snark because it seemed like the whole weekend was an extended Nike sneaker commercial (and maybe it was) but for the most part Browne sticks to the descriptiveness, although he does allow himself to make this comment:

For a day so authentically "Kevin Durant" in its storytelling, artifacts, and key characters, it was completely scripted. I was torn over how to feel about what I'd gotten myself into, leaning toward cynicism but impressed by Nike's marketing genius. They nailed every point on the Kevin Durant checklist.

Perhaps that is the power that Nike now wields these days. There is a reason why we just might love their NBA spots more than the clothes/games themselves - it is because they have tapped into the underbelly of America, regardless of whether it is urban, suburban, projects, or farmland. Nike knows who lives in those towns and they want you, the consumer, to believe that this kind of America is the place to be, wherever you are. Do you remember the Nike spot where Durant tools around in his family conversion van looking for pickup games? Can you actually imagine him doing that in real life? I can, and that's why the spot resonates. Durant does seem like he lives in that commercial's world from time to time.

Perhaps it is no surprise then that Nike put this thing together in Seat Pleasant, replete with this spectacle: 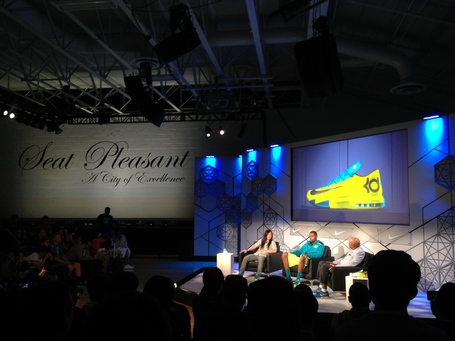 If you can't see it, to KD's right is Leo Chang, Nike's sneaker answer to Da Vinci, and to KD's left is the ubiquitous Michael Wilbon. Chang makes sense in that it's his product and his name is on the line, not just Durant's. However (if I may wax poetically bitter for a moment) seeing Wilbon at what is tantamount to an extended advertising campaign is both annoying but also logical. I know some people still dig Wilbon and how he's often the 'reasonable' voice in the booth along side Magic Johnson's jollies and Bill Simmons' fight-picking with head coaches, but it is frustrating to me to see what Wilbon has become because I enjoyed his work when he was a Washington Post guy and, you know, took journalism seriously.

For some retrospective, us old timers all wondered what would happen to Ahmad Rashad when Michael Jordan retired, since Rashad went from actual sideline reporter to a guy whose broadcasting career was defined by being Jordan's friend. Well, now we know - Rashad retired, and Wilbon took his place as, 'friend of famous NBA players.' Jim Gray tried to take the mantle, but "Iceberg Jim" (RIP, Ralph Wiley) was one of the most disliked personalities on TV and he had the double-misfortune of being the patsy for LeBron's ill-fated Decision, so he was kicked to the curb (although on second thought, perhaps recruiting Gray to broadcast the betrayal of a home town makes quite a bit of sense. Gray is kind of Littlefinger-ish). In his place sidled Wilbon, who made his transformation complete by doing this. (yeah, I know I'm approaching Clint Eastwood 'get off my lawn!' territory here, but when Wilbon called Kobe's comeback against a woeful Raptors team extraordinary I got the dry heaves).

Welcome to the offseason.

We are all Witnesses.