The Minnesota Timberwolves officially acquired Kevin Martin today, and we discover that the Thunder received a lovely parting gift in exchange.

Update2: added list of players who are theoretically feasible to acquire via the trade exception

On July 2nd, we learned that Kevin Martin would not remain with the Thunder organization, but instead as a free agent would sign with the Minnesota Timberwolves for approximately $28 million over 4 years. Now that players can officially be signed, we learn that Martin will be part of a sign-and-trade between the Thunder and the Wolves instead of a straight-up signing as a free agent, and in return the Thunder acquire a $7 million trade exception.

As is the norm, Woj broke the story:

In sign-and-trade of Kevin Martin to Minnesota, OKC will send cash to Wolves as part of deal to create $7M trade exception, sources tell Y!

The team later issued a press release announcing the broad details, wherethe Thunder will send approximately $400K in cash to the Wolves in order to receive at $7 million exception. ($400K + Martin's 2014 salary of $6.6 million comprises the $7 million):

The Oklahoma City Thunder acquired a Traded Player Exception and the draft rights to Szymon Szewczyk as part of a three-team trade that sent guard Kevin Martin to Minnesota and guard Luke Ridnour along with a second round draft pick to the Milwaukee Bucks, it was announced today by Executive Vice President and General Manager Sam Presti.

Royce Young at Daily Thunder explains the details about the most valuable component, the trade exception.

The Thunder are sending the Wolves cash to make it worth their while because they could just sign Martin outright. But in the deal, the Thunder "sign" Martin and then trade him to the Wolves, who are under the cap and to match salaries, send back what's called a traded player exception. Essentially a pretend player that doesn't occupy a roster spot but is worth the signing price, which in this case is $7 million.

It's a very Presti move. It's gaining value out of Martin's departure instead of just allowing him to walk for nothing. The Thunder may not use the exception, but now they have it. 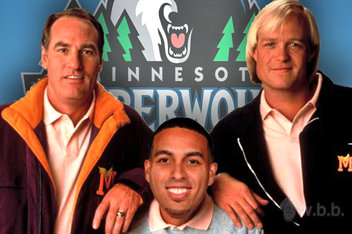 Martin's deal of $28 million over 4 years was announced on July 2nd.

The obvious question might be, why would the Wolves do such a thing? Why would they essentially help an opponent by giving them a tradable asset when they don't have to? First, there's the cash, which is always nice, but I would imagine there is also a secondary benefit, quid pro quo. The Wolves receive the future consideration that some day they might be on the other side of the coin, losing a player to the Thunder for nothing in return, and fair dealing might compel OKC to return the favor and grant the Wolves a trade exception.

Update1: astute reader daddydai commented that under this scenario, Martin's "Bird Rights" are protected. To further explain, Bird rights are a salary cap exception that allows a team to exceed the salary cap in order to re-sign their own free agents. It has been a key way for teams to keep their core together as salaries escalate. In order for a player to qualify, he must play 3 consecutive seasons without clearing waivers or becoming a free agent. In order for Martin to retain his Bird Rights, he cannot change teams as a free agent. So what the Thunder did was sign Martin to an extension, which kept his Bird rights alive, and then traded him to Minnesota. Martin's Bird rights are traded with him. The net result is that it is a win-win for everyone - Martin kept his Bird rights which gives him a higher potential contract threshold, Minnesota received a salary cap exception which allowed them to offer more to Martin, and the Thunder received a trade exception in return.

Here are some basic rules for this trade, which is called a "non-simultaneous deal" since OKC is not receiving a player immediately in return:

The trade exception has value because it essentially extends the life of Martin's contract, making his salary a tradable asset even though he is no longer with the Thunder. Along with the trade exception acquired from the Eric Maynor deal last season, the Thunder now have $7 million + $2.9 million in tradable assets (unfortunately you cannot combine these two exceptions).
Update2: Via Basketball-Reference.com, here is a list of players who are hypothetically eligible for the Thunder, given their 2013-14 salary. While it is easy to see that there are a number of players who would never be traded (e.g. Kyrie Irving, Anthony Davis), there is some real talent there that could potentially help the Thunder with a playoff run (and a number of guys whom most definitely would not).
(h/t Daily Thunder)
While it might seem confusing that the Thunder would have fought for a trade exception such as this when they are already approaching the salary cap threshold, it is important to remember that Sam Presti plays the long game. As Darnell Mayberry at The Oklahoman writes:

The most notable example of how a trade exception can be used can be seen in a pair of deals Thunder general manager Sam Presti pulled off while in Seattle in 2007.
Presti orchestrated a sign-and-trade with Orlando that sent Rashard Lewis to the Magic. In return, the then-Sonics received only a future second-round pick and a $9.3 million trade exception.
One week after Lewis joined Orlando, Presti then used much of the trade exception to acquire veteran center Kurt Thomas from Phoenix along with first-round picks in 2008 and 2010. The 2008 selection turned into Serge Ibaka. The 2010 selection ultimately was packaged along with another pick and became Cole Aldrich.

In other words, it wasn't the exception acquired, or the player acquired through the exception, but the draft picks connected to that player that Presti was after. More simply, Presti took a known player in Lewis and multiplied him into 3 players worthy of evaluation for the Thunder's pursuits. This multiplication of talent speculation, often seen in the NFL but still new to the NBA, is how small market OKC is staying ahead of the game. They already have their superstars (Kevin Durant, Russell Westbrook), and talented role players (Ibaka, Reggie Jackson). Now their goal is to acquire as many cheap (read: players on their rookie contract) but talented players as possible in order to evaluate which ones are worth keeping. If the draft is a hit or miss endeavor (and in this 2013 draft, that is definitely the case), it behooves a team like the Thunder to get as many players in front of their front office as possible in order to give themselves the most chances for unearthing another cheap gem (such as Grant Jerrett).

We play checkers, Presti plays chess. Not every move works and more players than not fail to pay off, but the point is that Presti keeps his pieces moving on the board in order to give himself as many opportunities as possible to land the next big fish.

Your move, rest of the league.

Sarah Rogers assisted with this story.