This is what it means to put the team on your back.

This game was an exciting one to watch. Thing started off pretty even, but the Pistons always seemed to hold a marginal advantage. Spurts of offense would be followed by parades of iron. The third quarter offered a turning point for the Pistons, as Grant Jerrett turned the ball over three consecutive times and the Caldwell-Pope/Drummond combo lit up the scoreboard. After nearly four minutes without a field goal, Kyle Kuric and Dwight Buycks got things going in the late third and early fourth. The Thunder were still noticeably behind, but from then on, Reggie Jackson put the team on his back and the Thunder defense did the rest. Jackson his 5 consecutive shots, passed it off for a couple possessions (to no benefit), and then made two more shots plus a trip to the line. The game was sealed with a pair of Adams free throws and a Buycks three. Ironically enough, that Buycks three was RJ's only assist. All in all, it's probably my favorite game so far, because Reggie really needed to show something.

At times, I didn't know whether I was watching Reggie Jackson in the Summer League, or Kevin Durant at Rucker Park. After a average start to his game, Reggie Jackson exploded in the fourth quarter, hitting an incredible number of threes and getting easy drives to the bucket. He finished the game with only a single assist, but when when you set a Summer League record for points, who cares?

Seeing him next to Kentavious Caldwell-Pope was an interesting dichotomy. Reggie Jackson scored nearly all of his points on the ball and created them himself. Caldwell-Pope, on the other hand, worked vigorously off the ball and could hit almost any shot that was passed to him. Both are their own brand of scoring guard, but when Jackson was hitting three after three in the face of the supposed better marksman, it was really fun to watch. I won't say that one is necessarily better than the other, but Jackson definitely struck the first blow in his favor today. 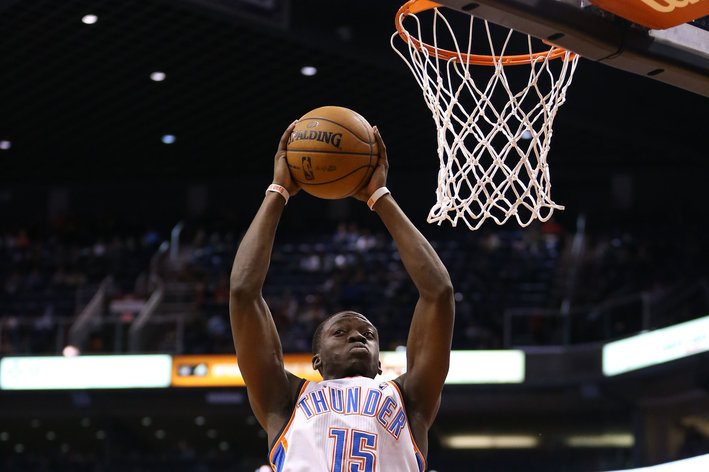 Steven Adams actually wasn't that bad tonight. The whole game was a complete turnaround of what we knew about him. His defense was able, but not great, as he got outwitted and outmuscled by Andre Drummond in the post a few times. His offense, on the other hand, was efficient and consistent, as he was able to get good position on Drummond and softly lay in some shots. Overall, his performance mostly confirmed that he still has a lot to learn, but that he's also willing to learn.

He's come a long way from when he started college, and he seems to be a lot more confident going up against opposing centers. But, as we saw today, a lot of what he's "good at" is determined by his size and not what he's actually learned or learning, simply because his game is so raw. What I'm trying to say is that the defensive center who only scores on pick and rolls could become something entirely different in a couple of years. And that's extremely exciting.

There was a point in today's game where I thought that Buycks would outshine Reggie Jackson for the second consecutive game. But when RJ kept draining three after three, he took a rightful step back. Still, you can't discount his impact on the game. He hit three of his four shots in the fourth quarter, two of which were early on and got an accelerated pace going. He also hit what was arguably the game clinching three that put the Thunder up by 5 with 32 seconds to go. I've covered his strengths and weaknesses before. I just wish we would sign this man.

This guy really needs to work on finding an offensive niche. It's almost absurd that a guy at 6'7" can average more rebounds than points, but that's what his first year in the NBA will most likely be. Let me put it this way: Thabo Sefolosha (who is of similar body type) made it in the NBA because he can finish on the break and drain threes. Roberson just shoots whenever he can. If he could develop a shot or a dribble drive game, his place in the NBA would be secured, no doubt.

Grant Jerrett continued shooting the ball, but he finished at 1-7. Meanwhile, he turned the ball over 4 more times and provided nothing else. Again, project. DeAndre Liggins had another subpar performance. With two ball dominating guards, he really struggles to get involved offensively. He was solid defensively though, as always. Kyle Kuric impressed me a bit with a couple of steals, but he continues to be an inefficient scorer. Ron Anderson is the consummate teammate, and always manages to find a way to get fouled in the paint. Still don't thing he has a chance at a roster, though. Michael Snaer needs to realize what a good shot is. Until then, he won't be able to succeed at a higher level, despite good talent. I didn't really know Ryan Reid played until I saw the box score.

Thunder Down Under: Dwight Buycks