OKC welcomed 3 of its newest members to the Thunder. WTLC was there to get their reactions.

The Oklahoma City Thunder were active during the 2013 NBA draft, acquiring 4 players during the evening. The Thunder acquired Steven Adams (#12), Andre Roberson (#26), Alex Abrines (#32) and Grant Jerrett (#40 by way of trade with Trail Blazers). The Thunder, already loaded with talent, will seek to integrate each of these players into the Thunder way of life.

On June 29th, the team officially welcomed these players, as Adams, Roberson, and Jerrett were officially introduced (Abrines is still overseas). WTLC had the opportunity to be there to take in the occasion and ask a few questions. Following are a collection of images and video from the event.

The team introduced the new members of the team, with Sam Presti doing the honors: 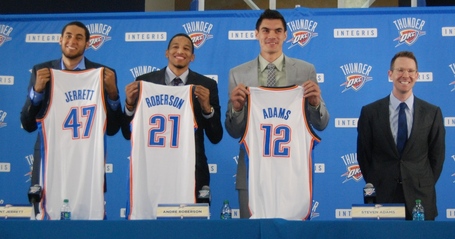 Via the Thunder web site:

Presti was proud to bring in new blood into the program, and the Thunder’s 2013 draft picks, led by Adams, expressed their joy when they found out they were selected by the Thunder.

"It felt like my birthday and Christmas put together," Adams said. "It isn’t just a basketball team. It’s much more. The community backs them. It’s a huge honor to be putting on the jersey and be representing the whole community."

Steven Adams w/Lesley McCaslin: Being drafted by #Thunder was like "Christmas and my birthday put together." pic.twitter.com/mXIptgBpky

"We’ve always focused on bringing in young players that are motivated to work, motivated to improve and motivated to get better," Presti said. "That’s the mark of a high performing organization. That’s what we’re striving to accomplish here in Oklahoma City, to continue to layer our team and our roster with like-minded players and people who are willing to put the time in to improve and ultimately help us build a deep and talented group of people going forward."

I had the opportunity to talk to the #40th pick Grant Jerrett directly. I asked him about his play as a potential stretch-4, a natural role given his height and shooting range, and what else he is hoping to showcase.

Sam Presti made note of Jerrett's shooting ability, via the Oklahoman:

"We see him as a player who definitely can stretch the floor at that position...He shoots the ball incredibly easy, and at a young age. The other thing about him that we've really been intrigued with is he's got a real sense of awareness on the floor, a great savvy offensively for a young player."

From the player introduction, Jerrett commented,

"The main thing is I feel blessed...Just seeing what this team does, not only on the court, but as well as off the court and how well they’re involved in the community, they’re just being good people and it seems like a good fit for myself to come in and do what I can to make this organization better."

Grant Jerrett on coming to OKC and the #Thunder: " I'm blessed to join this organization. Just to see… http://t.co/8HioQJI3rc

Jerrett further commented on his areas for improvement:

The #26 pick Andre Roberson had the opportunity to ask a number of questions about where he thought he might fit in. In this sequence, the best question was regarding how Kevin Durant mentioned he'd be surprised if any rookie came in and immediately contributed. Here is Roberson's response:

Although Roberson was a surprise entry into the draft, Presti indicated that he had his eye on the Colorado junior:

"His defensive impact is certainly supported by the numbers, as well as what you're seeing when you evaluate a player on film or in person," Sam Presti said.

"Andre is someone who caught our attention a few years ago. His persistence, his activity and his endurance within the game as a competitor are all signs of a player that's going to continue to improve with hard work and development."

Andre Roberson on coming to OKC: "I'm excited to get in there, work hard every day in practice." #WelcomeToOKC pic.twitter.com/JpFPLhBldJ

(Unless otherwise noted, all images and video are the property of Sarah Rogers. J.A. Sherman also contributed to this post.)