"With the twelfth pick in the 2013 NBA Draft, the Oklahoma City Thunder select: Steven Adams from Rotorua, New Zealand and the University of Pittsburgh."

Steven Adams, the newest member of the Oklahoma City Thunder, was one of the highest ranked big men in the class of 2013. Being the top big man available at pick #12, the Thunder took a chance on him. Adams has received a ton of criticism for his flaws at Pittsburgh, making a lot of people look past his strengths.

Offensively, Adams is a great shooter in the paint. Last season at Pittsburgh, he shot 57.1% from the field, averaging 7.2 points-per-game. Although his low PPG may be a red flag, the percentage is very impressive. For a post man, making well over 50% of your shots is extremely rare, and extremely impressive because it means that he does not force bad shots.

When in transition from defense-to-offense, Adams shot 83% from the floor. He's extremely athletic and runs the floor 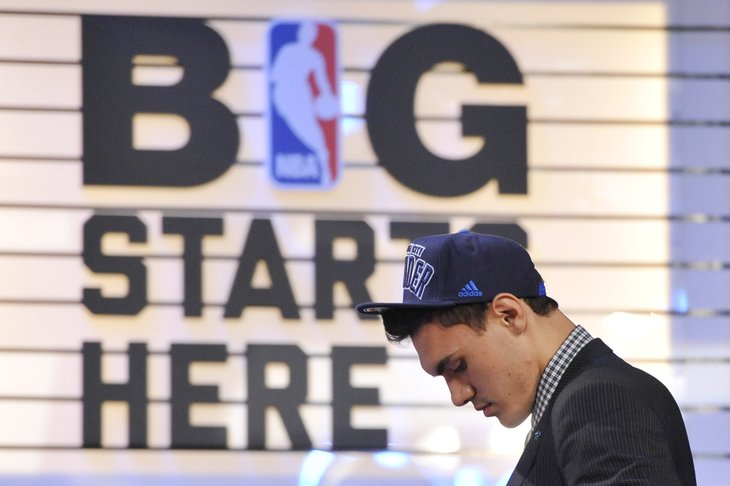 exceptionally, especially for a center. Posting up, he plays the rim extremely well, getting up and seeking opportunities to score. Adams runs the pick & roll occasionally, but when he does, he does it with intelligence; running off of the screen he set and turning it into a score. His ability to make this kind of play is crucial, as it is the bread and butter of most teams in the NBA, including the Thunder.

Defensively, Adams is great at grabbing rebounds and holding his defensive position against his opponent. Adams is known for his boards, both offensively and defensively. He gets up and snags down the board like nobody's business.

When Adams is involved in the pick & roll and is forced to cover a guard, he's capable of moving quickly and laterally. He utilizes a low stance with good balance won't let his opponent into the lane. The defensive potential Adams has is as high as any rookie that came out of this draft, and Coach Scott Brooks will work with him until he is a legitimate threat on the defensive side of the ball. Furthermore, Adams has Kendrick Perkins and Serge Ibaka, both known for their defense, to mentor him.

Like I said earlier, a ton of scouts were overlooking Adams in the NBA Draft due to his flaws. Yes, there are a few areas of concern that need to be worked on, but that means they will be worked on. Adams is something that Sam Presti and the rest of the Thunder organization bought into, meaning he does need a lot of work. First off, he's not a great offensive player scoringwise. Adams averaged only 7.2 points-per-game and he played about 23 minutes-per-game, more than half the game. Despite shooting a high percentage, he was seldom the focus of the Pittsburgh offense.

If you're an Oklahoma City Thunder fan, coach, or fellow teammate, here is a statistic that may scare you: Adams shot 44.3% from the free-throw line last season. Tempering this percentage however, Adams only went to the line on average 2.2 times per game, so it is difficult to say whether his FT percentage is a good predictor of the kind of shooter he might become. However, also the low FT attempts may indicate that Adams is not great at getting to the FT line, either. Since OKC is a team that depends on generating points at the stripe, this is an area of potential concern.

Also, despite Adams' ability to score around the rim at a high percentage, he sometimes has trouble receiving the ball and shooting. Watching the video above, you can see he gets blocked, fumbles the ball, and misses shots. That's the number one quality you need to get out of your big man. The D-League and lots of reps trying to get shots over Serge Ibaka will help him begin to improve these qualities.

In conclusion, I look forward to having Steven Adams on the block this upcoming season. Adams has a ton of potential, but as DraftExpress put it, he's a "long-term project."