The Oklahoma City Thunder drafted Pitt center Steven Adams with the #12th pick in the 2013 NBA draft. The Thunder found themselves with the 12th pick after the infamous James Harden trade last summer, and today it brings us a new big man into the Thunder fold.

Adams is a 7 footer with a solid NBA body, at 255 lbs. Most experts describe Adams as a "raw" player, and via SB Nation's scouting report:

At 7'0 and 255 pounds with a 7'4 wingspan, Adams is a massive human being who moves his feet well for a player his size. His defensive potential is off-the-charts. He has the strength to hold position on the low block, the length to play above the rim and the speed to hedge on the pick-and-roll. The problems come on the offensive end of the floor, where Adams looked years away from contributing to an NBA team. He doesn't have much of a feel for playing with his back to the basket, unsurprising since he rarely faced players his size in New Zealand.

We had previewed Adams in the past, and it was clear that he had impressed the Thunder franchise when he worked out for them. When you look at the Thunder's basic needs, they were straightforward - better depth at the PG position, and an eventual replacement for Kendrick Perkins in the starting line-up. With Adams, it appears as if the Thunder are looking to fill this center position. 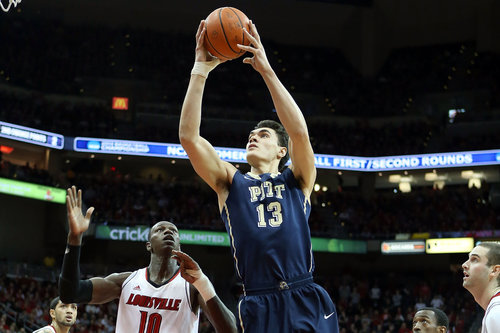 Steven Adams is headed to OKC. Here is the scouting report.

It is going to be a while before Adams reaches the level of play that the Thunder are going to need for sustained playoff runs, but that probably works out well for the Thunder. Even though Perkins is much-maligned these days, he is still valuable in the right situations, and if the Thunder have to play without him, they have the personnel to do it. In the meantime, Adams can learn the ropes, build his strength, and learn to deal with the Tim Duncan's and Marc Gasol's of the world. The Thunder have a year to make him game-ready, and hopefully if Adams is who OKC thinks, they will make that year pay off.

Adams isn't an exciting pick because he didn't drop down the board at all, but he may be the kind of role player the Thunder need to give more athleticism to their front line this year and have their center of the future down the road.