So, the 2013 NBA Draft is upon us, and it is the Thunder's most important draft since 2009. How far are they willing to go in order to improve their team?

We'll be all over today's NBA draft with live posts and tweets covering the action. Be sure to refresh the page and check @WTLC on Twitter for the latest happenings and analysis!

So, the 2013 NBA Draft is upon us, and it is the Thunder's most important draft since 2009. They now find themselves with a lottery pick, and a flawed team that fell far short of expectations. Wholesale changes are unlikely to happen, but it's clear that the team is in dire need of a boost. How far they're willing to go is the real question, however, and it will be interesting to see how willing Sam Presti is to gamble after so many years of success.

This post is written as a FAQ, and aims to answer any questions you might have about what the Thunder might do today and in this off-season. A lot of it might be stuff you know or have already heard before, but just skip to the questions you don't know. There's something to be had for everyone here, even if you don't read it top to bottom.

Who's on the roster for next season?

Kevin Durant, Russell Westbrook, Kendrick Perkins, Thabo Sefolosha, Nick Collison, Serge Ibaka, Jeremy Lamb, Reggie Jackson and Perry Jones III are all guaranteed roster spots next season. Hasheem Thabeet, Daniel Orton, and DeAndre Liggins all have non-guaranteed contracts, meaning that the Thunder can cut them without penalty to the salary cap before a certain deadline. Kevin Martin, Ronnie Brewer, and Derek Fisher are all unrestricted free agents. Martin and Brewer are thought to want to re-sign with the team.

What are the Thunder looking to do?

They need a big man. Kendrick Perkins has come up short as the starting center for the second year in a row, and there's no help in sight. Thabeet is an intriguing prospect, but can only do very basic things due to his total lack of coordination. Daniel Orton hasn't really shown anything, and often remained as the last man at the end of the bench. A long term starter would be nice, but the Thunder would be pretty much satisfied with anybody who can prove himself as a solid backup, like Nick Collison.

The Thunder have a few other needs as well. They may or may not re-sign Kevin Martin next year. Without him, they'd be in a bit of a scoring pinch. It would be naive to think that they could grab a dynamic scorer late in the first round, but they probably will try to find themselves a shooter who can space the floor, someone like a Danny Green or Mike Miller. They also could use a legitimate second string point guard, since Jackson hasn't exactly proven himself as a guard yet, but I doubt Presti will make any moves in that regard unless they fall in his lap.

Will the Thunder trade up?

They certainly want to. Rumors have been all over the place about the team wanting to trade up. The package offer supposedly on the table is Perkins, pick 12, and pick 29 for a top 5 selection. Unfortunately, that offer is garbage to all of the rebuilding teams sitting in the top 5, so it's extremely unlikely that anyone will take it. Still, Presti might be lowballing right now, and will make a power play for a high pick further down the line. In all honesty, if the Thunder want to trade up, it's going to mean giving up a good asset. Something like a Perry Jones, Jeremy Lamb, or Reggie Jackson. And I doubt Presti is willing to do that.

Who would the Thunder take if they got a high pick?

Nerlens Noel is the current consensus #1 pick and big man, so it's highly unlikely that the Thunder will grab him.

Are the Thunder pursuing Alex Len? 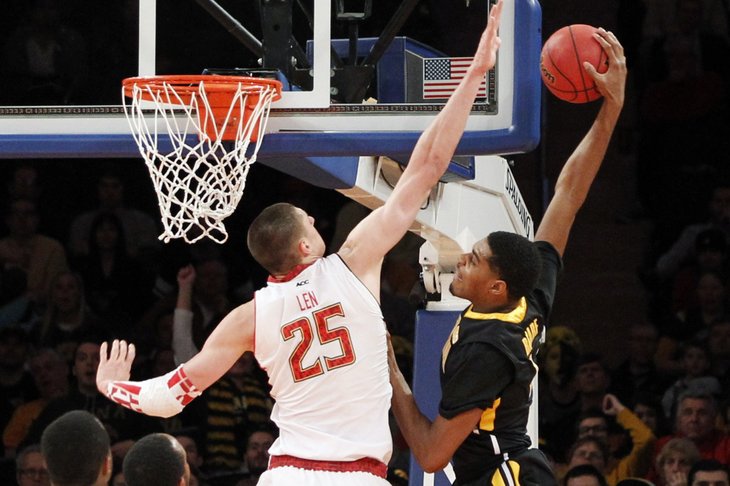 Alex Len is expected to be drafted high. Can the Thunder trade up to get him?

Alex Len, on the other hand, is a more viable target. He's said himself that Oklahoma City is interested in trading up to take him, and he has a legitimate chance of becoming a solid starter in the NBA. He moves like few others of his size do, knows how to keep his man away from the basket, has a nice touch near the rim, and can play against almost anyone. The knock on him is his risk of injury and lack of a jumpshot, but he's about as safe as you can get.

Who would the Thunder take at #12?

I went into detail about the potential players available at that spot in my column for The Lost Ogle, but here's the short version. If Cody Zeller is available, he's the most likely target. He's really fundamentally sound and of good character, so he'd fit in here as Nick Collison 2.0. However, he has a low ceiling, so there's not a huge chance of him becoming a long-term viable starter. Steven Adams, who will almost certainly be available, is the most likely selection. He's more of a project, but shows promise on both sides of the floor and works well in a fast-paced pick and roll offense.

Aside from those two, there's other guys the Thunder could reach for. Lucas Noguiera is a Brazilian

Should OKC take Nogueira with the 12th pick?

who surfaced as a potential target in the last month after declaring, but nobody knows what to make of him. He's got athleticism, but not a lot of fundamentals. He could go anywhere from the lottery to the end of the first round. Gorgui Dieng is a polished player who can contribute right away, but his offense is underdeveloped, and he has injury concerns. Kelly Olynyk is another potential selection, but his draft stock has slipped because of his lack of competition at Gonzaga and his lack of focus on the court. He does have the ability to drive it from the perimeter though. Lastly, there's Rudy Gobert, who's a prospect because he has a 7'8" wingspan, which is 2" longer than Hasheem Thabeet's. He hasn't shown much skill other than being tall though, so how he'll develop is anyone's guess.

At this point, any pick is a roll of the dice. However, I think the Thunder will be looking for a specialist here, and they'd love to get a three point shooter. There's a reason why we had Daequan Cook for a couple of years, and why we brought Andy Rautins in for training camp last fall. Thus, I think they're going to go for another shooter. Tony Snell would be a huge help offensively and defensively if he's available, and Tim Hardaway Jr. could be an excellent scorer. But those guys might not fall that low, so someone like Jamaal Charles or Glen Rice, Jr. might be a more realistic target. Other than that, the Thunder might look to draft and stash. There's a remote chance Rudy Gobert or Giannis Adetokunbo is available at that position, but if those two aren't there, there's just not a worthwhile foreign prospect to go for at that point. If the shooter or foreigner options aren't viable, the Thunder might look to draft another big man. Longshots like Mike Muscala and Jeff Withey are available. If nothing else, the Thunder will probably use the picks to trade up or trade out. In all reality, it mostly depends on who's left, and what's happened with their prior pick.

Could the Thunder trade for a current NBA player?

The potential is always there. The Suns will probably look to grab more picks, and it's likely that Marcin Gortat will be available. He's certainly achievable, but he's probably not the Thunder's first option, and I don't think they'd be willing to give up too much to get him. Philadelphia may put Andrew Bynum on the market, but he's such a huge question mark that I don't even want to think about it. The Jazz can sign and trade Al Jefferson, but that's further down the line. And as long as we're talking long shots, there's always Boston and Kevin Garnett.... Really, it's all speculation at this point, and I doubt anything happens.

Will the Thunder make a splash in Free Agency?

Don't count on it. They're already going to struggle to fit everyone into the 15 man roster next season, and I doubt they want to shell out the cash. If they do end up with an extra spot, expect it to be used for D-League call ups, a veteran backup there only to give advice, or....Derek Fisher.

What do you think the Thunder will do in the 2013 NBA Draft? Vote in the poll, post a comment! And remember, we'll have live coverage of the draft both here and @WTLC on Twitter!