2013 NBA draft rumors: Are the Thunder in negotiations to get #1 pick from Cleveland?

Cleveland has the #1 pick in the upcoming draft. Could the Thunder grab it?

Share All sharing options for: 2013 NBA draft rumors: Are the Thunder in negotiations to get #1 pick from Cleveland?

We are but a few days away from the 2013 NBA draft, and as is the custom, the rumor mill is ramping up. The Thunder, currently sitting with the #12 and #29 pick, are in need of a quality athletic big man to continue their natural growth. However, the big men in the middle rounds of the draft, such as Cody Zeller, Steven Adams, or even Lucas Nogueira, are not sure things. In fact, so far the consensus is that the only sure things in this year's weak draft are the top two bigs, Nerlens Noel and Alex Len.

Enter draft guru Chad Ford, who wields the power of suggestion not unlike Fed Chair Ben Bernanke. Bernanke can suggest that maybe it's time for the central bank to stop buying bonds and send the markets into a massive sell-off. Meanwhile, Ford can suggest that maybe the Thunder are in play for the #1 draft pick, and NBA fans lose their minds.

The Cavs continue to mull their options at No. 1.

They are engaged in trade talks with a number of teams. Sources say the Thunder, Timberwolves and Blazers have been the most proactive in trying to get the No. 1 pick -- but so far neither team has persuaded the Cavs to move out of the top pick.

Any time a team that has struggled in the league lands the #1 pick, they have to seriously evaluate what that pick is worth to them. If there is a franchise-altering talent like LeBron James or Kevin Durant in play, you take the player and ignore the short-term pain. If there is no superstar in waiting, is it better, especially in the East, to rebuild through multiple picks and veterans on the cheap? Cleveland finished 24-58, 14 games out of the 8th playoff seed and once again riddled with injuries (Kyrie Irving and Anderson Varejao the most notable). Would a healthy team and more veterans give them 15 extra wins next year? Or is it better to take Noel, who Ford describes as:

Noel has the most upside of any player in the draft. He tests at the top or near the top of every analytical tool I’ve seen.

The Cavs believe that given the strength of their roster, it’s unlikely that they’ll draft a starter. They believe their core of Kyrie Irving, Dion Waiters, Tristan Thompson and Anderson Varejao is better than anyone they could draft at No. 1. They also believe that while they have a huge hole at small forward, they’ll use their cap space to find a veteran small forward to fill that hole. Regardless of who they draft, he is likely coming off the bench.

The question for Cleveland is, do they want to use a #1 pick and all that this entails on a bench player? The New Orleans Horn-icans knew they'd be bad too, so they ended up playing Anthony Davis and he radically improved over time. Would the Cavs show the same patience? 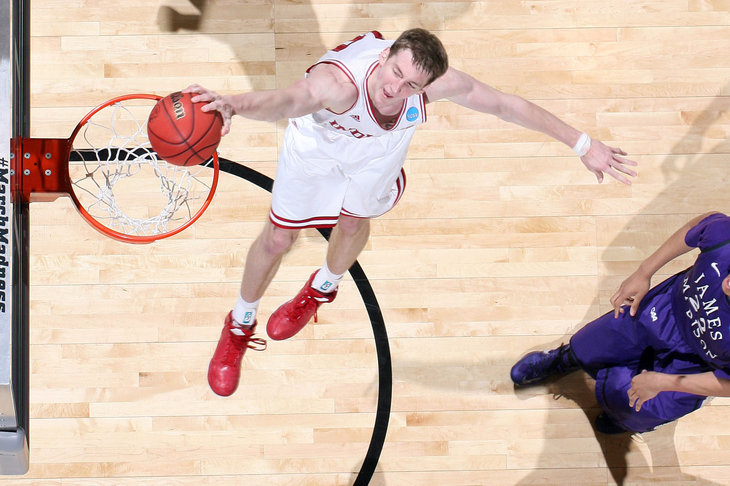 Which brings us back to the Thunder. They are in a strange place where they are not urgent in a way that a team like the Lakers are, but by the same token this post-season was a cruel reminder that windows of opportunity do not stay open forever. A chance to grab a #1 big man in the draft would be a contrast of Sam Presti's philosophy and Scott Brooks'. Presti wants the talented young players to learn on the job, while Brooks is more comfortable with his veterans. Would a Noel crack the rotation in Year 1? Could the Thunder afford to let him make mistakes as they carom toward another #1 seed? Conversely, could the Thunder afford not to?

Daily Thunder's Royce Young deduces that yes, if the Thunder move up, Noel is likely the man:

With Ford reporting the Magic would target Noel at No. 2, it would seem OKC has its eyes on the Kentucky big man. If it's Ben McLemore or Victor Oladipo the Thunder are after, rising all the way to No. 1 doesn't seem all that necessary as either one could be available at No. 3, 4 or 5.

There's another chance it could be Alex Len, the seven-footer from Maryland. The Cavs have been said to be interested in him, but again, if it's him OKC wants, there could be a chance to take him a little further down the line. Noel really appears to be the only prospect the No. 1 pick is absolutely necessary for.

Who and what do the Thunder have worth offering? Keep in mind that Ford asserts that Cleveland believes that it already has a good roster, and that the only hole worth noting is their weakness at small forward. OKC has those two draft picks this year, but they also have Jeremy Lamb, Perry Jones III, and even Reggie Jackson to consider offering. The first two could help fill that small forward hole, but the Jackson thing is more interesting. On its face, Jackson

Noel really appears to be the only prospect the No. 1 pick is absolutely necessary for. -Daily Thunder

would seem like the destined backup to Kyrie "get buckets" Irving and wouldn't see his fortunes change materially from where he is in OKC. However, there is this fact to consider - Irving has not played a full season of basketball since high school. With this kind of health uncertainty, suddenly a good backup PG becomes even more important. Would Presti dare dangle Jackson right as he is coming into his own in the league when the guard position is more important than ever?

Lastly, to throw a bit of cold water on the situation, Ford has reported that Cleveland has already turned down aimed high and pursued all-star Trail Blazers power forward LaMarcus Aldridge, only to be rebuffed:

What are the Cleveland Cavaliers seeking in exchange for the No. 1 pick? Sources say they reached out to the Portland Trail Blazers in an attempt to land LaMarcus Aldridge for the Nos. 1 and 19 picks. The Blazers quickly rebuffed them.

If Cleveland is not looking for an established 20-10 producer like Aldridge, what then are they looking for, and could the Thunder provide it?

Once again, all eyes are on Sam Presti as Thursday night approaches.