Kevin Durant is Jay-Z's first NBA client, and KD officially announced it via his Instagram feed.

Kevin Durant announced via Instagram that he has officially signed with Jay-Z's new agency, Roc Nation Sports. Previously we had reported that Durant had dropped his agent Rob Pelinka and was expected to sign with Jay-Z (real name: Shawn Carter). However, Jay-Z, who had owned a minority stake in the Brooklyn Nets and played a role in moving them from Newark to Brooklyn, was thought to have to divest his ownership shares before he could begin to sign NBA clients.

Although Durant will be a full client of the firm, he doesn't need a contract agent because he signed an $85 million extension with the Thunder in 2010 that will take him through the 2015-16 season. Perhaps that's the reason why Durant can be signed, even though a source told ESPN.com last week that Jay-Z had not sold his small ownership share (1 percent) of the Brooklyn Nets. An owner of a team cannot have any affiliation with a sports agency that represents players in contract negotiations. Jay-Z can, however, do marketing deals now even if his share of his Nets holdings hasn't been sold. 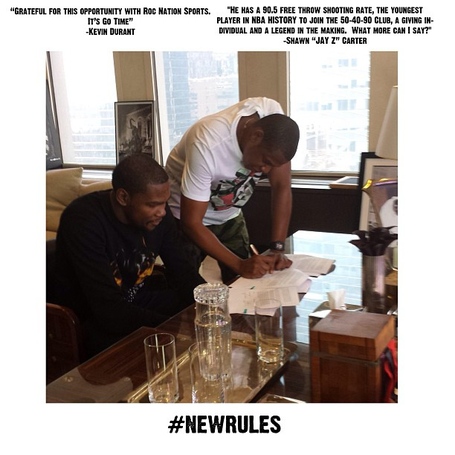 "Grateful for this opportunity with Roc Nation Sports," Durant said, in the text above the tweeted picture. "It's go time." - Kevin Durant

"He has a 90.5 free throw shooting rate, the youngest player in NBA history to join the 50-40-90 club, a giving individual and a legend in the making. What more can I say?" - Shawn "Jay Z" Carter 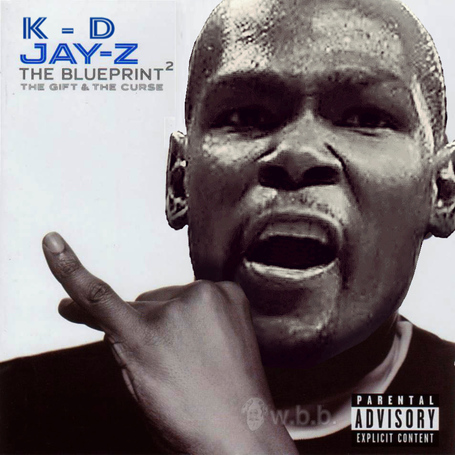