The show has ended and the Miami Heat take the title once again, defeating the Spurs in Game 7 of the 2013 Finals.

Congratulations to the Miami Heat, who have just won their 2nd championship in a row by completing an epic 7 game series against the San Antonio Spurs. Game 7 went down to the wire, but in contrast to Game 6, the Spurs, who trailed most of the game, could not make the shots that Miami did and came up just short. Also in contrast to Game 6, which featured some of the best competitive basketball you will ever see, Game 7 was about survival, and the Heat simply had a few extra possessions where they converted whereas the Spurs could not.

It was a one possession game with under 90 seconds to play, with the Heat leading 90-88. The Spurs then had 3 chances to either take the lead or tie, but Kawhi Leonard's 3 pointer, followed by Tim Duncan's missed hook shot and missed put-back attempt, were their last best chance to catch the Heat.

LeBron James put forth an effort that is truly befitting an MVP. In the series' biggest game, James went for 37 points, 12 rebounds, 4 assists, and 2 steals, including 5-10 from 3-point range. It was he who hit the game icing jumper with 27 seconds to go, and scored 9 points overall in the 4th. There isn't really much left you can say about LeBron - he continuously made adjustments throughout the series, transforming himself from an uncertain player to one who knew how to wreck the Spurs on both ends of the court time and time again.

LeBron Hugs it Out in Finals Win 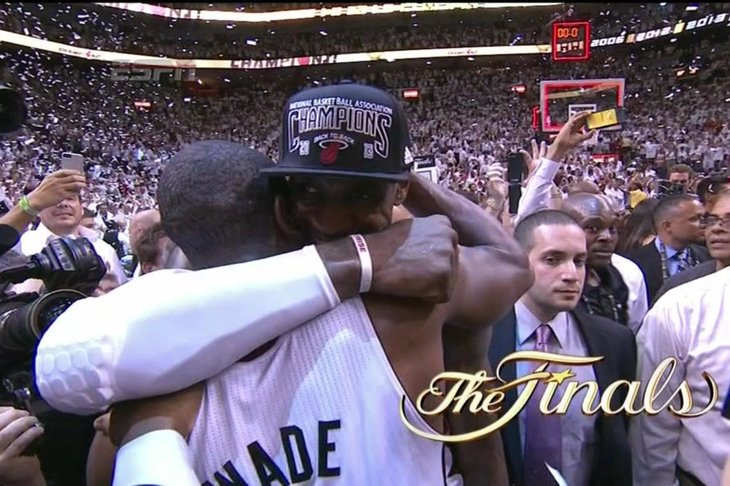 LeBron shares a final embrace with Wade, Popovich, and Duncan after winning Title

The Spurs fought gamely throughout the event and showed a remarkable perseverance despite the mental and physical fatigue that stemmed from the Game 6 loss. Unfortunately, they were playing catch-up through most of it and even when they took brief leads they could never get the key stops on the other end to maintain the effort. Perhaps this was punctuated best by Mario Chalmers' desperation 3-pointer at the end of the 3rd, which erased the Spurs' 2 point lead and put them in the chase once again in the final quarter.

As for the Spurs, whenever you lose in such dramatic fashion there are going to be dozens of what-if's that will plague the fan-base over the summer. Duncan played well for most of the night and Kawhi Leonard was the clear breakout star in the series, finishing with 19 points and 16 boards on the night. Most important in my mind, the Spurs did not get the kind of clutch play from another secondary player that they had in their 3 previous wins. Previously, it had been Manu Ginobili, Danny Green, and Gary Neal who made surprise contributions, but in Game 7, they all came up tragically short. Green in particular went from being touched by God every time he let a 3-pointer fly to a guy who shot a crippling 1-12 from the floor. Manu was solid for much of the game, but in the end the Heat's defense of Ginobili's passing was the difference, just as it was in Game 6. He had 4 turnovers in the 4th quarter alone, none more painful than his bad pass to Duncan with 23 seconds remaining, which all but ended the Spurs' shot at recovery.

It was also likely a bitter end for Tony Parker, who was clearly hobbled for much of the series after injuring his hamstring. Gone was much of his illusiveness and ability to finish at the rim, and in the end Parker could only manage 10 points on 3-12 shooting. It is one thing to have a shot to win and miss; it is another entirely to have your body betray you when you need it the most. It is a tough contrast to Dwyane Wade, who despite battling knee injury problems, figured out a way to contribute on both ends of the court, scoring 23 points and grabbing 10 rebounds.

In the end, what I will remember most about this series is that it was worthy. It was worthy of our time, worthy of our analysis, and it is worthy of our memory. I am sad because the Spurs lost, and maybe you are happy that the Heat won. I hope we can at least agree that regardless of which side you fall upon in that equation, that we got to share this Finals experience together for a remarkable 2 weeks where each team brought out the best in each other, and for me it concluded with my wish being granted.

And so we wrap up the 2012-13 NBA season. It was an adventure, to be sure, and we Thunder fans will have much to think about after such a playoff letdown after high hopes. In the mean time, celebrate with the Heat or mourn with the Spurs, but don't ever forget that the 2013 season was one worth remembering.