Scott Brooks has received much criticism in these playoffs. How did he make the right call at the end of game 1?

Scott Brooks has been a bit of a whipping boy in these playoffs. As the Thunder have been forced to deal with the unplanned contingency of losing one of their key players in Russell Westbrook, Brooks has received more and more scrutiny as to the shortcomings of his coaching style.

In particular, he's been taken to task again and again over his late-game play calling, specifically game-ending sequences. We saw it in Game 4 of the last round, where his set play was nothing more than a 12 second sequence designed to produce a step-back 3-pointer. It was by luck that the actual shot turned out to be a lay-up.

In fact, this is what Truehoop's Henry Abbott wrote after that sequence:

I'd bet big money time will make clearer that the wrong answer is to call timeout to set up an isolation play. No matter your opinion of advanced stats, these things are all true:

With that in mind, Brooks deserves a lot of credit for ignoring his natural coaching impulse, listening to his own words that he gave to his team at a previous time-out, and trusted his team leader. As ESPN's Kevin Arnovitz writes:

The ball landed in Durant's hands with 18 seconds remaining, the Thunder down one and about 89 feet from their basket.

This is the instant when the majority of NBA head coaches call timeout. In fact, Thunder coach Scott Brooks did so himself in a similar situation in Game 4 against Houston with 12.1 seconds remaining and his team trailing by two.

But rather than let Memphis get its second-ranked defense set for trench warfare in a half-court possession, Brooks jumped up from his seat and feverishly waved his superstar downcourt.

"It's something that we talked about during [the previous] timeout," Brooks said. "It worked out that the right guy had the ball [off the turnover]. If it wasn't [Durant], we would've called timeout. A long rebound, still we were going for it. We were going to attack and put pressure on their defense. Kevin is a smart basketball player. He understands time and score. He understands the situation. I thought he had three things. That's one of the best players in basketball coming at you at full speed. He has the pull-up, the 3, the drive and the ability to make plays."

As Abbott has written many times, often the best thing a coach can do is do nothing at all. If you consider that the Thunder could not generate a good look against a Rockets team whose defense is one of the worst in the league, how much more prepared would the Grizzlies have been if OKC had called a time-out? Not only could they have gotten their match-ups squared away, but they also could have reinserted Tony Allen to defend Reggie Jackson and really cause confusion.

Instead, Durant was able to push the ball, walk into a jumper that is about as easy for him as a free throw, and in addition, Serge Ibaka had all the Grizzlies bigs beaten down the court. If Durant missed, Ibaka was in perfect position to grab the offensive rebound: 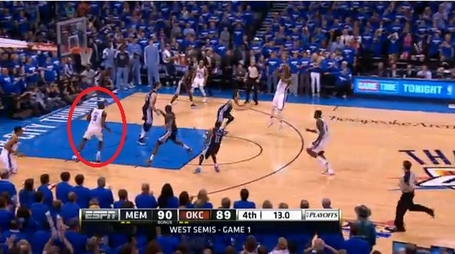 The Thunder often struggle to "set up a play." Kudos to all of them, and Brooks in particular, for staying true to their word and trusting Durant would make the right decision on the fly when it mattered most.