Listen: Nick Collison interviewed by "Between The Lines with Kevin Keitzman" on Sports Radio 810 WHB in Kansas City

OKC Thunder Forward Nick Collison sits down with Kansas City station Sports Radio 810 WHB to discuss the devastating tornado in Moore, OK and the conclusion of the season.

Share All sharing options for: Listen: Nick Collison interviewed by "Between The Lines with Kevin Keitzman" on Sports Radio 810 WHB in Kansas City

The ever entertaining Oklahoma City Thunder forward Nick Collison was in Kansas City and stopped by the studios of Sports Radio 810 WHB last week to discuss a wide range of topics. You can listen to the full 12 minute interview here:

Nick Collison interviewed by "Between The Lines with Kevin Keitzman"

The interview started off discussing the recent devastating tornado that hit Moore, OK and Collison made sure to let everyone know how they can help out those effected by the tragedy. The best way currently is to go to www.redcross.org or texting 'RED CROSS' to 90999 to donate money to help out. 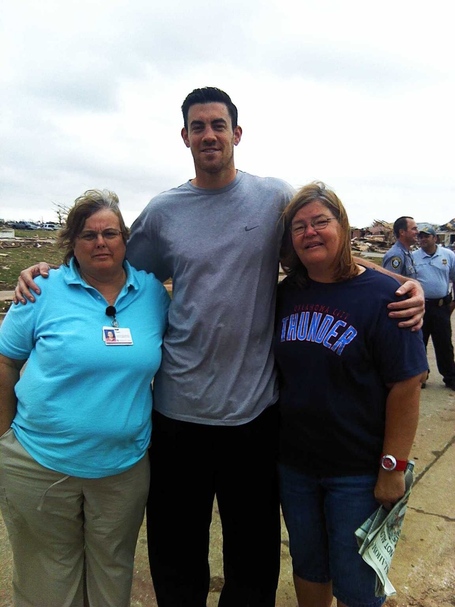 Later on in the interview Collison was asked what it is like to play with two superstars who have two different styles of play in Russell Westbrook and Kevin Durant. Collison responded:

"I'm fortunate to have been around with those guys since they first got here and we've grown so much as a team. I think the thing with them is their talent is off the charts and I guess their mind set or where their spirit are in the right place. I think we all saw how much we missed Russell (Westbrook) in these playoffs and he provides...he is a special player. There is no one in the league like him who has that effect on the game with his...the force he plays with and he's come along way in the leadership area that people down see that much."

Collison was then asked about how much better he is today as an NBA compared to where he was his first few years. To paraphrase, Collison said that it is important to figure out what you can do to be effective and to bring value to a team. He adds that how he sees the game has changed a lot from his first few seasons thanks to the comfort level he now has in the NBA. He then goes on to say that the situation you end up in has a lot to do for your success as a young player. Citing San Antonio Spurs Forward Kawhi Leonard as an example of a guy who landed on a team where he has a defined role and can contribute immediately.

Of course Collison was asked about his Alma Mater Kansas University and the recent talent factor that it has become under Bill Self. He mentions that players like Ben McLemore and Andrew Wiggins made a great decision to pick KU. He also offers a breakdown of McLemore's game where he calls him a natural scorer who has a great feel for the game and he can put it on the floor along with shoot the ball really well.

Nick Collison is one of the more insightful and interesting players in the NBA and this interview proves that to be true. The interview is only 12 minutes but it does not lack for content. If you are a Thunder fan I highly recommend you take the 12 minutes and listen to this interview ASAP.