The Indiana Pacers were able to solve the LeBron James riddle for at least one quarter. How did they do it?

The Miami Heat and Indiana Pacers are now tied at 1-1 in their Eastern Conference Finals match-up. What has surprised me most so far is the Pacers' ability to play out in front of the Heat, or at the very least even, throughout most of the contest. This means that the Pacers have a deliberate plan in place on how to deal with Miami both offensively and defensively and they are sticking with it.

The ending of Game 1 was all about LeBron James' game winner and the Pacers' defensive lapses, but in Game 2 the opposite occurred. The Pacers defense got their defense right, LeBron committed 2 turnovers in the final minute, and we had another big upset on Miami's home court.

As I pondered what the Pacers might be doing, I took a look at their designated 3-point shooters and noticed an interesting trend. Namely, proven playoff 3-point shooters like Ray Allen, Shane Battier, and even Norris Cole are struggling to make shots. Now, it might just be a case of their top shooters struggling from the floor, but as I watched the Heat struggle through the 4th quarter of Game 2, I realized that the Pacers are doing an outstanding job at staying home on LeBron's outlets.

In other words, it seems like the Pacers are gambling that with Dwyane Wade injured, the Heat do not have any other playmakers who can compliment Lebron. To be sure, they have plenty of SHOTmakers, guys who can spot up from around the floor, and the Heat have plenty of guys who can finish at the rim. Chris Bosh is still doing a good job inside, and Chris Anderson is doing yeoman's work off the bench as well (witness 60 points in the paint in Game 2). However, those 3-point specialists, the guys who enable the Heat to run away with games, are getting choked off by the Pacers defense.

The game's 2 final sequences are emblematic of what Indiana has decided to do. If you want to get great breakdowns of the sequences, check out Mike Prada's work here. I'm grabbing one screen shot of his though, because it shows the defense really well: 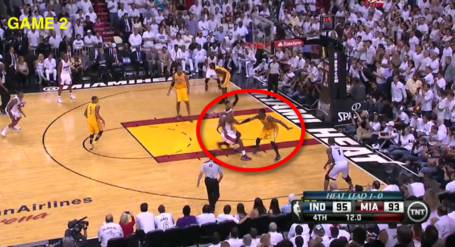 While you could argue that Roy Hibbert is leaving the corner-3 open (Bosh), we have to think back to Game 1 where the Pacers got no help to stop LeBron's drive, as Prada notes in his post. In this scenario, you HAVE to prevent James from getting to the rim. More importantly though, once James has to stop and turn, the Pacers slide into the passing lanes to prevent the outlets.

This, I think, is a key to the Pacers' defensive strategy. We often here the old adage, "if a player likes to drive right, then make him drive left." In LeBron's case, it is not about the drive, but about the pass that comes out of the drive. By eliminating clear passing lanes, the Pacers are trusting that Paul George can slow down James just enough so that he cannot finish consistently at the rim and are keeping their defenders at home to prevent the Miami shooters from going wild. To be sure, we're still going to see some of James' physics-altering passes, but sometimes you have to live with that.

I like the strategy, and Game 3 will be an interesting study to see how James adapts and whether the shooters are willing to become playmakers.

Lastly, there is a possibility that Wade may not play in game 3. To see a great analysis, check out 8 Points, 9 Seconds to see some incriminating image stills.