Tornado has decimated Oklahoma City, killing at least 24; you can help (Update12)

A devastating tornado decimated Oklahoma City on Monday. Stay on top of the breaking news and consider donating to the Red Cross to help those in need.

Share All sharing options for: Tornado has decimated Oklahoma City, killing at least 24; you can help (Update12)

Oklahoma has seen its fair share of horrible weather related events in the past and the past two days are no exception. People have lost homes, and in some cases, loved ones. As I'm writing this, I'm glued to the TV as the current storm is being compared to May 3 of 1999. If that turns out to be true, many people will need as much help as they can get. For those of you in Moore and south Oklahoma City, please be safe and know that we're thinking of you. The situation is ongoing, so, again, please be safe. Sorry for brevity, but this is a "if you're not below ground you will not survive" storm and I've got my get-the-hell-out bag packed just in case.

Watch a live stream of the storm coverage here.

The original death count of 51, reflected in the headline, was in error. The Oklahoma state medical examiner's office has revised downward the total:

Seven of the nine children who were killed died at Plaza Towers Elementary School, which took a direct hit, but many more survived unhurt.

"They literally were lifting walls up and kids were coming out," Oklahoma State Police Sergeant Jeremy Lewis said. "They pulled kids out from under cinder blocks without a scratch on them."

The Oklahoma state medical examiner's office said 24 bodies had been recovered from the wreckage, down from the 51 they had reported earlier. The earlier number likely reflected some double-counted deaths, said Amy Elliott, chief administrative officer for the medical examiner.

(Sherman) As OKC works to pick itself up after the devastation, it is amazing to know that so many of you guys who have frequented this site are ready and willing to help the city do it. The outflowing of support that we've seen here at WTLC as well as through our SB Nation brethren and on Twitter have been overwhelming, and the unified compassion brings great hope. Our deepest thanks to all of you for making it happen, and be sure to stay standing with OKC as the city works to pick up the pieces.

Update9: From the White House

This evening the President spoke with Oklahoma Governor Mary Fallin to express his concern for those who have been affected by the tornadoes last night and continuing today.

As the President told Governor Fallin tonight, the administration -- through FEMA -- is committed to providing all the assistance it can to Oklahoma as the response effort unfolds. Already, FEMA has deployed an Incident Management Assistance Team, Urban Search & Rescue Teams, and an Medical Emergency Response Support Team to provide resources to hard-hit areas in Oklahoma.

FEMA is urging those in impacted areas to listen carefully to instructions from local officials, and to take the recommended protective measures. Residents should monitor local radio or TV stations, or the National Weather Service at www.weather.gov.

As the response effort develops, here is a list of resources for those affected:

Update6: If you or someone you know is in need of a counselor

Also via Kelli: if you need some help on how to talk to children about natural disasters, you can find some great information HERE. Given the news regarding Plaza Tower Elementary School, I think this is relevant to the situation. 37 dead overall and reports of 20+ possible at the school and the number is expected to climb.

Update4: Are you local and want to donate supplies?

@thunderobsessed You can help the victims of Moore by taking bottled water to Edmond North HS, canned food to SF, and clothing to Memorial!

Bodies of 24 children being recovered from Plaza Towers Elementary School. Nothing can prepare your emotions for this. #Oklahoma

RT @thunderobsessed: Looking for loved ones, helping find love ones safeandwell.org. You can confirm safety of your well beings.

Update1: Per Bennett below:

Text "FOOD" to 32333 to donate $10 to storm relief. For donations of gloves, boots, toiletries, shovels, trash bags, dust masks, and other goods, you can drop them off at OKC’s CBS affiliate News 9’s studio at 7401 North Kelley Avenue OKC, 73111. For donations to the Salvation Army: https://donate.salvationarmyusa.org/uss/eds/aok

The American Red Cross continues to respond to the areas impacted by Sunday tornadoes, according to a news release Monday morning.

Officials report at least 310 structures were damaged or destroyed in Oklahoma. Most of the tornado damage Sunday was in Pottawatomie County.

The Red Cross of Oklahoma's Twitter feed has the pertinent information if you want to help, or you can call 1-800-RED-CROSS:

Best way to help tornado victims is to donate to the Red Cross at redcross.org or text REDCROSS to 90999. #okwx

Also, here's a link from the City of Oklahoma City that should be included w/ general information on tornado safety.

The University of Oklahoma is opening up spaces in Housing for displaced families (405) 325-2511. For blood donations, http://obi.org/donor-centers/.

The destruction is growing, so if you're local, do what you need to do to be safe. If you're watching the events unfold, consider donating to the Red Cross so that peoples' lives will be able to be restored. 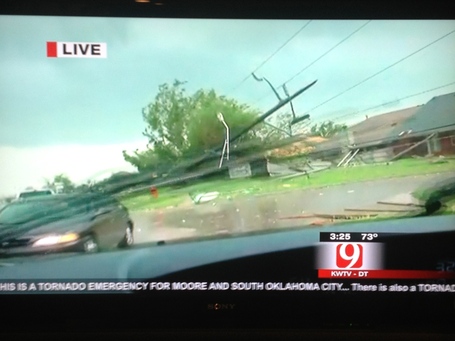 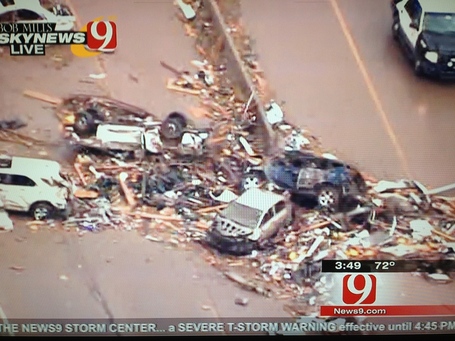 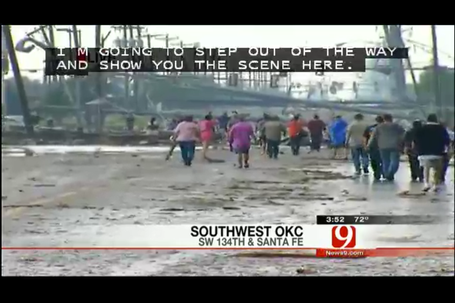