2013 NBA Playoffs: Opposite of clutch - how two plays undid the Thunder's shot in Game 3

With the score tied at 81-81, the Thunder were in prime position to take control of the series against the Grizzlies on Memphis' home court. Suddenly, everything went wrong.

Share All sharing options for: 2013 NBA Playoffs: Opposite of clutch - how two plays undid the Thunder's shot in Game 3

Game 3 of the Thunder vs Grizzlies series had a familiar feel to Game 2 (and if we're honest, just about every single game these two teams have played over the past 3 years). It was a back-and-forth affair and with the game running down, the score was tied. Better yet, the Thunder had some momentum, having outscored the Grizzlies 11-4 over the previous 4 1/2 minutes, putting together timely shooting with staunch defense. All they needed to do was stay the course and they would skip pass the faltering Grizzlies and steal a pivotal Game 3 win.

The two plays that stand out during these final 90 seconds are an interesting parallel between what we might call youthful indiscretion and veteran leadership. Let's take a look at both.

"Better Basketball" Jackson is playing a role he wasn't prepared to play, but none the less has not backed down from the challenge. His task, and it was no small thing, was to morph into Russell Westbrook almost overnight, creating the same offensive intensity and defensive chaos done by the All-Star point guard. Jackson may not possess the same skillset as Westbrook, but he has engaged with gusto. As a result, he has taken on the mantle of what Russ represents, for both good and ill.

Earlier in the game, Jackson pulled off this ridiculous shot that had him looking more like NFL running back Adrian Peterson than an NBA player:

It is the kind of play at which Westbrook is so adept - it is a fusion of athletic instincts, control, and awareness. However, because it is an innate and reactive demonstration of pure basketball instinct, the kind where the ball goes where it goes because it has no other choice, I have to wonder if Jackson was thinking about this move when his critical error took place.

The defense stepped up once again, forcing Jerryd Bayless into a tough running one-handed jumper that fell short. Serge Ibaka grabbed the rebound and threw the outlet pass to Reggie Jackson, who was off to the races, looking to continue the game-changing momentum. Then this happened:

This reckless play and turnover not only represented the death of the Thunder's momentum, but also the tipping point after which OKC would not even score again for the remaining 90 seconds. To be sure the subsequent shots were not necessarily effected by Jackson's turnover, but the turnover at this stage was a mortal wound. 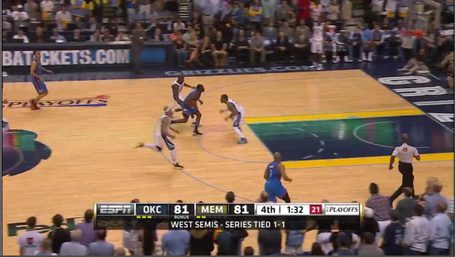 Decisions in real-time in an NBA game may seem easy as we watch them unfold. Combine that with a playoff game, a pivotal moment, and two players who had averaged about 18 minutes a game prior to this series, and suddenly an easy decision is not so easy. Take a look at that screen shot. Jackson has Fisher positioned perfectly on the wing, either to spot up for the 3-pointer (Fisher had hit a 3 previously to tie the game) or for to cut to the rim for an easy lay-in. Either way, the Thunder needed to capitalize on this rare fast break opportunity.

Jackson made the wrong decision, this much we know. It was egregious and obvious and youthful carelessness, right?

Fast forward 40 seconds. The Thunder were on the ropes, now down by 2 possessions with the clock running out and needing a stop on defense. Kevin Durant provided that stop, tipping an entry pass intended for Marc Gasol, and Fisher, he who just watched his young understudy botch a critical play, grabbed the ball. Now Fisher had an entire shot clock with which to work but needing a score in the worst possible way to even give his team a chance. This possession, a transition opportunity against an unprepared defense, was the Thunder's last, best chance to recover.

This is how Fisher played out the moment:

If you freeze the play at the moment before Fisher fires up his ill-fated 3, this is what you see: 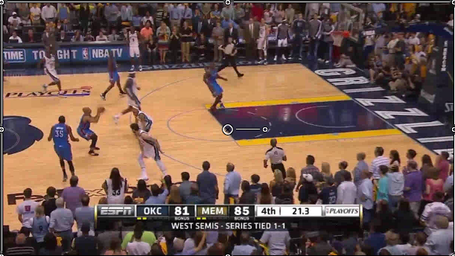 What you see here by the Grizz is textbook transition defense. Perfect balance on the court and all Thunder players accounted for. The only opportunity, if anything, is a perfectly led pass to Ibaka down the middle of the lane, which would have been incredibly difficult given the angle. Otherwise though, there is no opportunity here. With 20+ seconds left, is the best play for Fisher to hoist a 28 foot contested 3-pointer?

Perhaps Fisher was reminiscing about this play, the first one that came to my mind when Fisher let it fly:

If anything, you could argue that Fisher's shot attempt was a worse decision than Jackson's because at least in Jackson's case, the game was still tied and they had 90 seconds to go. In Fisher's case however, a missed shot effectively ended the game.

What are we to make of this? What is the grand takeaway? The pessimist in me reflects on the fact that the Thunder still struggle with the endings of games. They don't manage the time well, they often force difficult shots unnecessarily, and instead of lengthening the games, have a tendency to shorten them. Also, what a comparison between these two individual plays says is that in a myriad of possible options, guys sometimes make the wrong one. It doesn't matter if it's a 2nd year player or a guy with 5 championship rings. Through 3 games, it has been the Thunder who have been making the bad decisions (Jackson's end of game 1 foul on Quincy Pondexter's 3-point attempt was just as bad, but Pondexter's missed free throws eradicated the cost).

The optimist in me says that a reversal of one or more of these end-game decisions turns a loss into a win. Jackson makes the pass. Fisher pulls it out and looks for Durant. Furthermore, it brings forth an admonition. If we want Jackson to spell Westbrook, then we have to be willing to allow Jackson to make Westbrook's mistakes from past years. Two years ago, Westbrook was making the same kinds of errors we saw from Jackson. He learned from them and now rarely makes those errors anymore. Jackson will learn as well.

We cannot erase the past, but the future is still to be determined. All it takes is one win in order to move forward.