The Thunder look to close out the Rockets again tonight. Let's look at 3 elements of Game 4 and see how the Thunder plan to continue their growth without Russell Westbrook.

The Thunder once again look to close out the series against the Rockets tonight. They will continue to adapt to life without Russell Westbrook and will hopefully continue to show positive growth in both their offense and defense.

Here in no particular order are 3 lingering thoughts that I have that sprung out of the game 4 loss and how the Thunder should hope to move forward.

1. The Rockets were facing elimination in Game 4.

Context always matters, and this little tidbit of information that seems to have gone by the wayside. Game 4 was a close-out game to complete a sweep against a talented Rockets team. Teams never want to get swept, especially on their home court, so what may not have been quite obvious as we've been obsessing about Kevin Durant's turnovers and Serge Ibaka's vanishing act is the fact that the Rockets were in full desperation mode and they played like it.

The Rockets got what they hope is a career-defining performance by 2nd year forward Chandler Parsons, huge help from their bench, and survived a shaky performance from James Harden to come out with a 2 point win. They had to figure out a way to get at least one win in this series.

To be sure, OKC missed an opportunity to finish things up and get some rest, but let us not forget that to do so would have meant beating a Rockets team that 2 weeks ago was on the cusp of getting a #6 seed, and if they played in the East, likely would have been a #3 or #4 seed.

Many coaches, Grizzlies coach Lionel Hollins included, have stated that the more desperate, more aggressive team usually wins. On Monday, that team was Houston, and they barely held on.

2. Serge Ibaka (and Reggie Jackson) got a taste of the pressure, and that is a good thing.

We all saw Ibaka melt to the floor after missing a potential game-tying layup as time expired. The miss was unfortunate, but what I found interesting was the body language of everyone.

Ibaka's reaction was understandable. He wanted to lay there, he wanted to hide, he wanted to forget the moment. His teammates though, specifically Derek Fisher and Thabo Sefolosha, would not let him wallow. They wanted to pull him off the court as quickly as they could so that he would not dwell on the moment. They knew that he had a great opportunity, he had made a play to get the shot up, but it just didn't go down. It happens.

Ibaka is right - he's never had to attempt a game-saving shot before. However, what he needs to learn is that trying and missing is not the worst thing in the world, as long as the attempt was made. Consider that Durant has commented that the best way to approach game-winning shots is not to care more, but to care less. Once the shot is gone, it's gone. You just live with it. In fact, look at KD after the game ended: 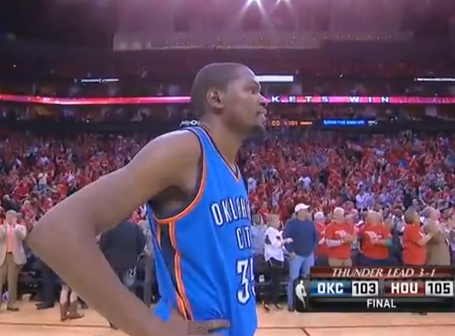 Durant doesn't look that broken up. In fact, he is almost smiling. He knew that OKC had a shot to win a game where they had been outplayed, and it didn't quite happen. He knows his teammates got a good lesson on the pressure of the moment, and that lesson will be good for them in the long term.

As the playoffs go on, OKC's players cannot be afraid of these moments, so hopefully this lesson, while painful, is one that instills a positive outcome. Next time, Jackson will see Ibaka open under the rim. Next time, Ibaka will not miss.

All the positive aspects above duly noted, the Thunder still have a horrid time running a competent end-game sequence. You can see that they had 12 seconds to run a play, ample time to run a multi-faceted play set that could produce various options. Instead, we got the most predictable, least potentially successful 'play' you could imagine. Here is the set-up: 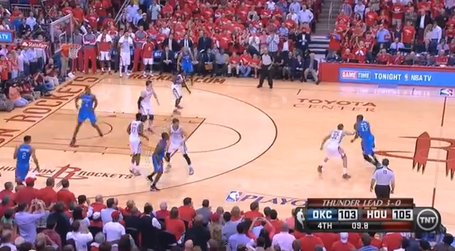 As soon as we saw this play develop, we all knew immediately that Durant was going to work right and attempt a step-back 3-pointer while his teammates stood and watched. Truehoop's Henry Abbott has plenty to say about this today, but let me quote the most succinct portion (along with pieces he's written about each aspect):

I'd bet big money time will make clearer that the wrong answer is to call timeout to set up an isolation play. No matter your opinion of advanced stats, these things are all true:

This play and others like it continue to be, in my mind, the biggest thing that holds OKC back when it comes to a dynamic offense. With collective talent that rivals any team in the NBA, at times the Thunder make it incredibly, mind-bogglingly easy for sub-par defensive teams to stop them. Houston does not play good defense, but as you can see, because they knew exactly what was coming, they were ready to double-team Durant if he drove, were content with him shooting a step-back 3-pointer, and ignored everyone else.

Forget about end-game sequences - this bad offensive play is what has killed OKC in the 3rd quarter of each of the last 2 games. Diversify this mentality, even a little bit, and the Thunder will be sending Houston into the off-season tonight.