The Thunder got lit up by the Knicks Sunday afternoon, and Coach Nick provides his standard outstanding job of breaking down the defensive issues.

The Thunder ran into a red-hot Knicks team this past Sunday afternoon. Just like the Knicks had done in their previous 11 games, they came out on top with a dynamic 3-point shooting offense and Carmelo Anthony's individual scoring performance. However, great offense does not happen in a vacuum, and Coach Nick of BBall Breakdown is back with another exceptional take on how the Thunder defense got picked apart throughout the game.

As Zorgon noted earlier today, 125 points is the most that OKC has given up in 3 years. Be sure to check out Z's excellent post that breaks down 10 different defensive sets. You'll see how both Coach and Z address a lot of the same issues, but then give different takes on the proper way to deal with them.

Here are a few additional comments:

As Coach Nick notes at the very end, the Thunder have struggled defensively against most of the elite teams this season. 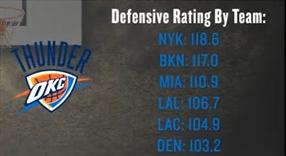 While the Thunder have still shown that they can play dominant defense for stretches, which is really what good defense in the NBA is about (unless you play for Tom Thibodeau or Lionel Hollins of course), they have shown to be sub-par when it comes to defending teams who know how to pass the ball from sideline to sideline and find 3-point shooters. With the exception of the Nuggets, who instead use their passing to create an insane amount of points in the paint, each of the teams above feature players like Jason Kidd, Deron Williams, and LeBron James who know how to rotate the ball around the perimeter to find open shooters. In fact, even though the Knicks are not a great assist team, ranking near dead-last, they wracked up 22 of them against the Thunder, many of which you see above. The majority of those open 3-point shots came by finding the open shooter after the Thunder made double-teaming errors.

Part of the problem for the Thunder is that they often fail to recognize who they'e trying to game-plan against. The Spurs ran their offense through Tony Parker, the Pacers ran theirs through David West, and the Knicks' operate through Carmelo Anthony. Those are three completely different players trying to do completely different things. Against the Spurs and Pacers, OKC had a plan of defensive attack and executed it well, holding those teams to 88 and 75 points, respectively. However, against the Knicks, the Thunder were not prepared for the barrage of 3-point shots that were to come, even though NY is #1 in the league in 3-point attempts per game.

As we wrote earlier this season, good passing teams recognize that the Thunder often get lost on defense or are slow to recover when they are facing teams that are actively seeking 3-point shots every time down the court. It is a confluence made for disaster - the Thunder struggle to defend the most efficient shot in the game - the corner-3, and good teams are game planning to exploit it repeatedly.

Part of the problem is personnel - the Thunder often featured 2 bigs on the court at the same time, despite the fact that the Knicks were rolling out crazy line-ups such as this, which featured Jason Kidd, Ray Felton, J.R. Smith, Chris Copeland, and Steve Novak. There is only one thing this lineup is looking for: 3-pointers. Yet there is Copeland, standing all by himself, ready to hit another 3-pointer. 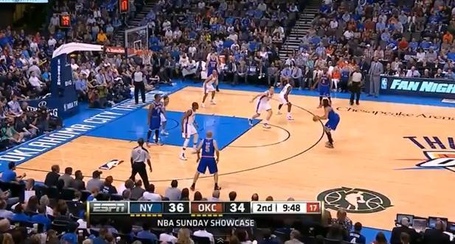 This set is a bizarre derivative of the Miami Heat's "5 Out" offense, perhaps featuring Kidd in the LeBron role. Zach Lowe at Grantland wrote earlier this year:

Miami and Erik Spoelstra have [been] often playing a five-out system, with all five guys moving around the 3-point arc as the Heat run through a series of rehearsed actions while hunting for gaps in the defense. It's a system Miami settled upon through organic internal growth, free-agent signings, injury-related improvisation, and the study of everything from college football to NCAA basketball to high-profile international hoops teams.

It is as if they took the method that weak college teams use in the NCAA tournament to try and upset the favorites; they shoot lots of 3's and hope that they can make enough of them to keep it close against superior competition. However, in this case, the best team in the league has substituted 6' passing and shooting specialists with historically great players, and the result is an offensive efficiency that is frightening.

Furthermore, in another outstanding post from Lowe, take a look at what the Raptors' coach Dwane Casey has to say about the whole point of players driving to the rim and posting up:

"Players are penetrating now with no intention to score," Casey says. Post-up players, including James and Carmelo Anthony, have gotten better at reading help and skipping the ball immediately to the other side of the floor instead of just hitting the closest player and starting a series of passes, Casey and other coaches say.

"Guys like Andre Miller and Kevin Garnett — they're posting up hoping a second guy will run at them, so they can pass," Sampson says. "You're better just playing one-on-one in the post if you can."

There are no more Hakeem Olajuwons in the league. The closest you're going to come to a fearsome classic post game is by the Grizzly brothers, Zach Randolph and Marc Gasol. While it still behooves the Thunder to be ready to play against a classic-style offense, by and large it doesn't exist anymore. Even with the Spurs and the great Tim Duncan, his posting up has as much to do with his finding open shooters as tossing in banking hook shots. The game has changed. Yet repeatedly OKC seems flummoxed when they're ready to deal with Miller and KG in the post while wondering who left the corner shooter open again. The post has become the set-up play, the sub-optimal solution. However, within it there still occupies a place that sucks the Thunder in when they should be spreading out.

The challenge for the Thunder going forward does involve tactical changes in approach, no doubt. However, what is really plaguing their team this season is a philosophical disconnect between the way the league is going and the way they're trying to play, both on offense and defense.

Statistically, OKC is the best offensive team and one of the best defensive teams in the league. So why is it that we don't think of them that way?