Defensive Disaster: How the Thunder Got Schooled by the Knicks

125 points. The last team to drop that many on the Thunder in regulation was the Utah Jazz, back on April 6th, 2010.

Share All sharing options for: Defensive Disaster: How the Thunder Got Schooled by the Knicks

NOTE: I started this article before I knew Coach Nick would be duplicating some of the plays in his breakdown. However, this article does have a lot of plays not mentioned in his video, and tons more analysis from our side of the fence. So I'd heartily encourage you to read on.

125 points. The last team to drop that many on the Thunder in regulation was the Utah Jazz, back on April 6th, 2010. So yes, the Knicks scored more on the Thunder last Sunday than any other team in three years. That, on its' own, is pretty darn amazing.

But, let's take this result and put it into semantics. What made the Knicks offense so unstoppable? Well, their plethora of threes are a good start. The unusual part isn't the percentages they were hitting (44.1%, which isn't unbelievable), but rather the sheer amount of open attempts they were able to get. In fact, they missed a good deal of wide-open threes, and probably could have ran away with the game were they more on-point.

Anyway, let's take a look at the Examples. As always, feel free to click on the image for a larger view. 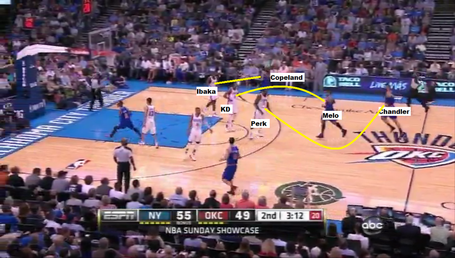 Here, we start off with what should be a fairly simple offense. Ibaka, KD, and Perkins are all supposedly aware of their respective matchups, and are ready to guard against the inevitable Carmelo pick and roll or isolation play. 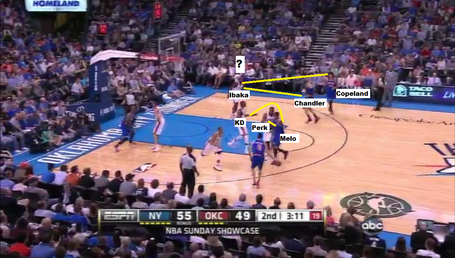 But then, something goes wrong. Kendrick Perkins decides to guard Melo, who is KD's assignment. KD, assuming Perkins would stay with Chandler, is now in no man's land. Meanwhile, Ibaka, who was supposed to guard Copeland, is now forced to guard Chandler near the basket. 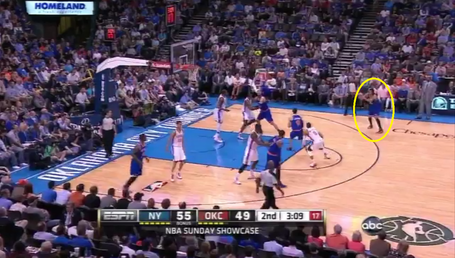 Here's the worst part: KD doesn't even react in time, and Copeland is given a wide open three. 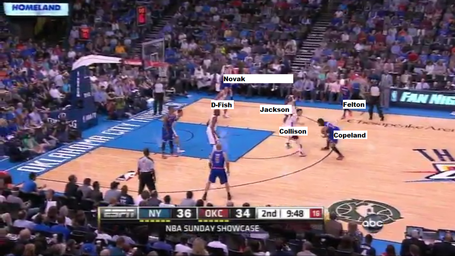 Copeland is given the ball at the top of the key, with Collison guarding him. Copeland prepares to drive to his right, opening up the possibility of a Reggie Jackson double-team. 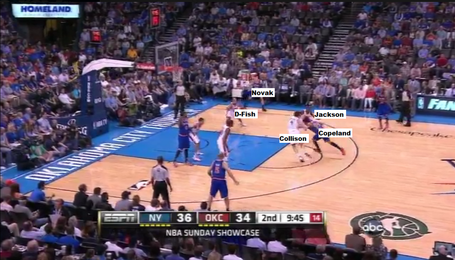 Smartly, Jackson proceeds with the double team. But, strangely, Derek Fisher scoots over to help out as well. Now, the Thunder are triple teaming Chris Copeland, and Raymond Felton and Steve Novak are wide open on the perimeter. 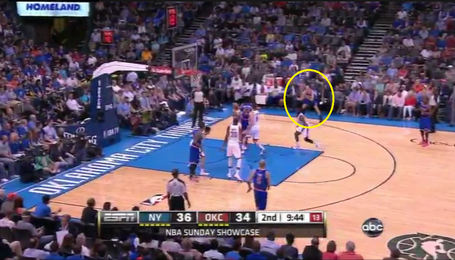 Jackson, seeing Fisher's help, smartly goes back to defend Felton. But by then, it's too late. Copeland makes the easy pass to Steve Novak, who now has a wide open three. 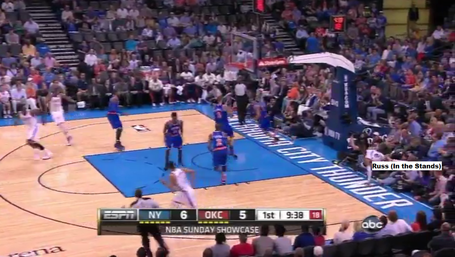 This is something that Coach Nick of Bballbreakdown loves to rant and rave against. Russell Westbrook drives the lane, and without even getting hit, unnecessarily torpedoes himself into the stands after missing a tough layup. The Knicks now have a 4 on 5. 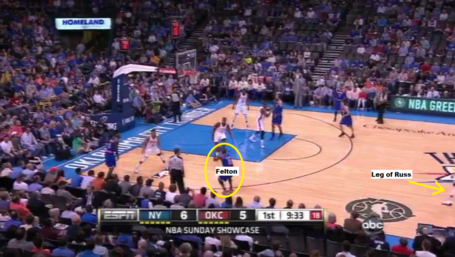 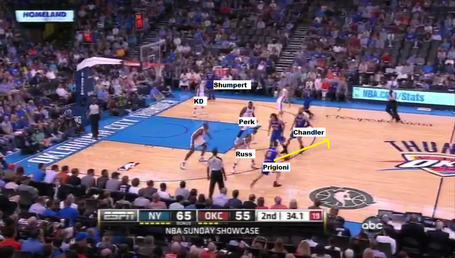 This is an interesting double screen by New York, using both of their big men to block Westbrook from guarding Prigioni. 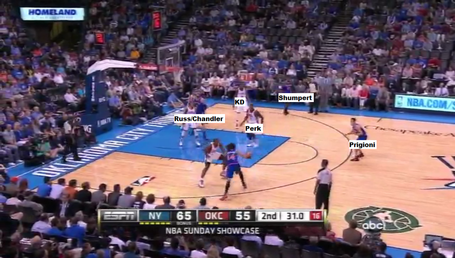 The screen works, and you now have a terrible mismatch. Westbrook is down in the post defending Tyson Chandler, and Pablo Prigioni is wide open on the perimeter while Perk stands uselessly at the top of the lane. 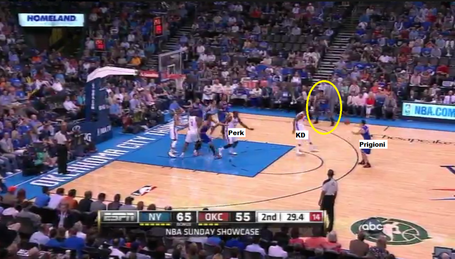 KD sniffs out the open Prigioni, but by then, it's too late. Perk is standing flat footed in the paint while Iman Shumpert has a wide open three point attempt. 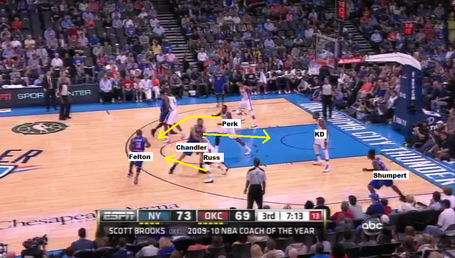 This is an example of an extremely successful screen. Russell Westbrook is stopped in his tracks by Tyson Chandler, while Raymond Felton goes to the top of the key unharmed. Perk is forced to try to stop the jumper, letting Tyson Chandler easily roll to the basket. 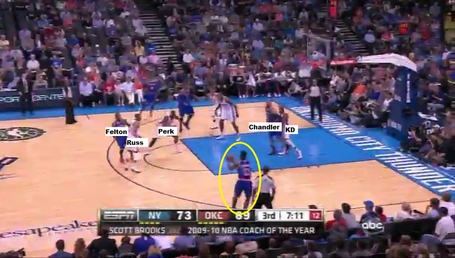 KD picks Chandler up, but this leaves Shumpert wide open on the wing. 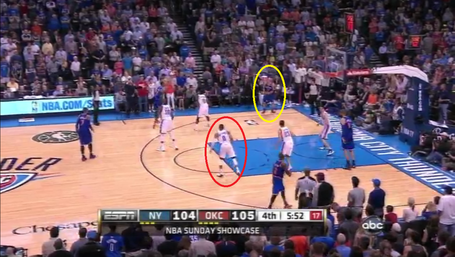 There's no need to show you more than one image on this one. Russell Westbrook guarded a ghost on this play, obviously thinking that there was someone behind him on the three point line. Instead, Jason Kidd was sitting in the corner, ready for a wide open three. 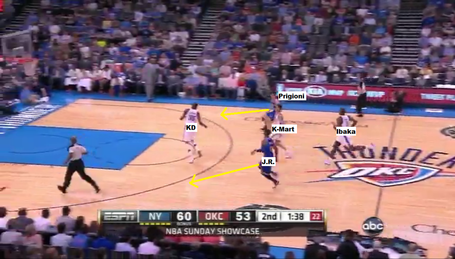 Fast break, with a 3 on 3 situation. (Carmelo Anthony is just out of the picture on the right.) Given the situation, K-Mart should go for J.R. Smith, KD should pick up Prigioni, and Ibaka should guard Anthony. Right? 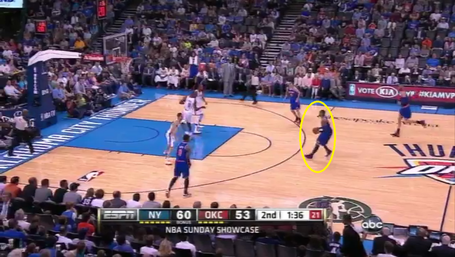 Wrong. Ibaka goes to the post and stands uselessly behind Kevin Durant. Carmelo Anthony steps up for a wide open three. 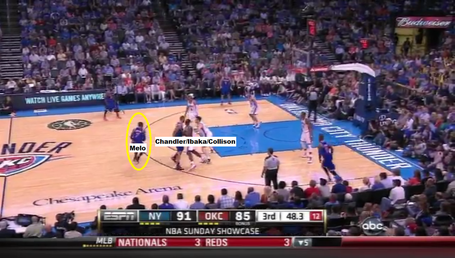 This is more ammunition for the "Ibaka should not guard scoring forwards" argument. The slow Ibaka is blocked by a Chandler screen, and Melo is free to take an uncontested three. 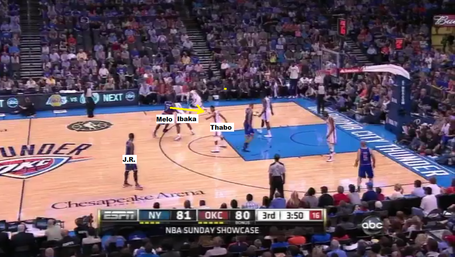 Carmelo Anthony on Ibaka. Thabo Sefolosha comes to help out, but constantly points at J.R. Smith, imploring someone else to take him. 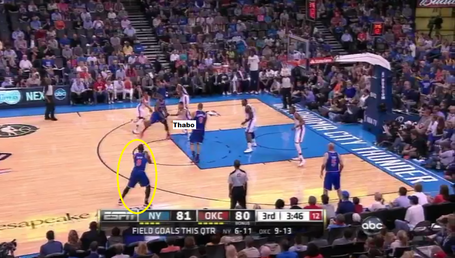 Thabo's pointing turns out to be all for naught as J.R. Smith steps up to the line for another open three. 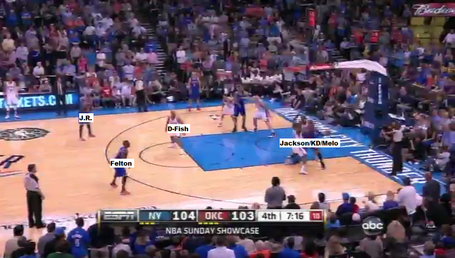 Last one. Carmelo Anthony is double-teamed on the right block. Jackson is in position to get back to Felton in ample time. Fisher doesn't seem to think so, though.... 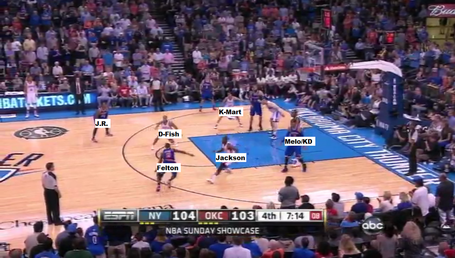 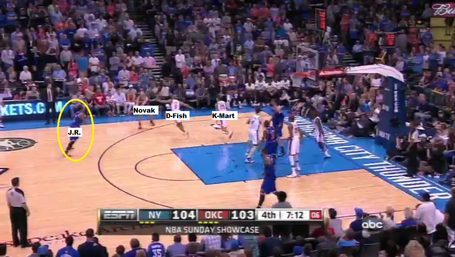 Felton drives, causing K-Mart to try and stop an easy pass to Tyson Chandler. Felton then smartly passes the ball to Novak, who Derek Fisher has to go and cover. This leaves Novak the easy job of passing it to J.R. Smith, who's wide open for yet another three point jumper.

What does it mean?

There's no one cure-all solution to the Thunder's problem guarding the three tonight. But, there are two over-arching themes.

1. The Thunder spent too much time trying to pressure a excellent passing team, especially with big men. The Knicks are one of the best teams in the league at handling the ball, and they CAN make you pay.

2. Whenever the Thunder were on the floor, there was always a glaring defensive weakness. Whether it be playing big against a small lineup, playing Fisher and Martin together, or simply a bad matchup, there always seemed to be something for the Knicks to exploit.

Is this the way in which the Thunder lost to the Heat? They're two different teams operating under two different systems, so I'd venture towards no. But there are similar themes in that both teams were able to take advantage of the Thunder's pressure beautifully, passing out of double teams and causing tons of matchup problems.

What I'd really like to see Scott Brooks do against a team like this is fortify the interior defense. If the Knicks are going to hit tons of threes anyway, why not focus on closing the paint, like you did earlier in the week against Indiana? It certainly could have helped to stop some of the easy baskets Chandler, Copeland, and Anthony were getting. I understand that pressuring on the perimeter is what this team does, but they have to have a defensive calling card somewhere.

What were their other problems?

Obviously, the Thunder's problems weren't limited to the three Sunday afternoon. They were also having major problems controlling the boards. I just did a feature article on the Thunder's problems from that standpoint, so I won't go into too much detail. But, needless to say, their overarching problem is the same as always. They take too many jumpshots, and, as a result, allowed an undersized team to beat them on the boards.

Kevin Durant struggled during the second quarter. There's not much I can really say about this one, he was just clanking shots that he normally makes. Since the overall offense was fantastic, the Thunder weren't too badly affected, but it definitely contributed to the deficit.

Derek Fisher wasn't used properly. I wrote a whole article over this previously, but this game just takes the cake in terms of misusing the guy. It's easy to say this by looking at the stat sheet, but I literally went back and watched all of his minutes. During his first stint, he missed a few shots. During his fourth quarter stint, he contributed absolutely nothing other than a semi-defensive stop on Carmelo. His defense didn't hurt as much, because the Knicks generally run with a role player that can't break a defender down (Kidd, Novak), but why not at least put an offensive option out there?

The good news is that both teams who cause these problems against the Thunder exist in the East, so any potential matchup problems could wait until the NBA Finals. But other teams in the West aren't exactly slouches, and the Thunder really need to adjust their defense to opposing teams accordingly. Whether this game is a sign of nothing or a sign of things to come, however, is still unknown.

What do you think about the loss? Let us know in the comments!