The Thunder hold The Pacers to just 8 points in the fourth to pull away with the victory.

The Oklahoma City Thunder put together a dominating fourth quarter to pull away from the Indiana Pacers, 97-75. The Thunder won the fourth quarter 25-8, holding the Pacers to just 2-18 shooting in the final quarter.

Kevin Durant had 34 to keep his lead on the NBA scoring title, while Russell Westbrook had 24 points, 9 assists and 7 rebounds for the Thunder. Durant left the game in the second with what was later called a calf contusion, but returned in the second half, and lead the Thunder to their third straight victory, and second in this tough back to back stretch.

The Pacers were led by Roy Hibbert who had 22, David West with 17, and George Hill who had 10, could have clinched the divisional title with a win tonight, instead they will have to wait until tomorrow against the Wizards.

The Thunder closed out tonight in impressive fashion on the road. Anytime a team shoots as badly as the Pacers did tonight, it's going to be easy for the Thunder to win. Even more impressive than holding the Pacers to 8 points in the fourth, the Thunder outrebounded the Pacers 53-31. If the Pacers were going to win tonight, they needed to win the rebounding battle, and get as many second chance points as they could.

A downside to tonight's game, is that Kevin Martin's cold streak continues. The Thunder need to have Martin lead the second team and be another scoring option for the Thunder, unfortunately, Martin, who had 9 points tonight, has gone cold recently and has played inconsistently.

What do we take away from this game in light of the playoffs?

The win puts the Thunder even with the Spurs atop the West, with the Spurs Thunder ahead because of a division record tie-breaker. OKC is looking to be in good shape to get that #1 spot as the 3 of the next 4 games for the Spurs are against playoff teams, and Gregg Popovich might opt to rest his starters for the end of the season.

It's unlikely these two teams will meet in the playoffs. Although the Pacers are one of the few teams that could give Miami trouble in the playoffs. If by chance the Thunder do meet the Pacers, OKC looks to be in good shape by the way they were able to stop the Pacers defensively.

The Thunder have also appeared to settle on a good 10-man rotation entering the playoffs, with Reggie Jackson getting most of the backup PG minutes.

With six games remaining, if OKC wants to win the West, the Thunder have to hope the Spurs trip up at some point before the end of the year. The Spurs are an impressive 33-5 at home this year, ironically, so are the Thunder. Assuming these teams make the conference finals, home court advantage could determine the series.

Get your complete Swanson-Thunder Pyramid of Greatness here. (click to enlarge) 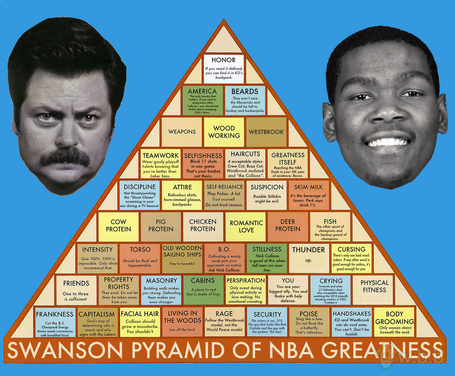