2013 NBA Playoffs: The Many Problems of Kendrick Perkins

There's a lot of things that factored into the Thunder's loss to Houston last night. But one thing sticks out to me like a sore thumb: The horrible 9 minutes put in by Kendrick Perkins.

Share All sharing options for: 2013 NBA Playoffs: The Many Problems of Kendrick Perkins

There's a lot of things that factored into the Thunder's loss to Houston last night. But one thing sticks out to me like a sore thumb: The horrible 9 minutes put in by Kendrick Perkins. In those 9 minutes, he managed to end up with a -17 +/- ratio, turn the ball over 4 times, foul 4 times, and miss a shot. Granted, his plus-minus wasn't as bad as Sefolosha's, but Sefolosha was moreso a victim of circumstance. Perkins, on the other hand, played a large role in his poor performance. He just couldn't do anything right. He didn't play help defense, he didn't contain Asik, and he fell victim to the Rockets pressure.

His performance last night, combined with his poor performance in Game 3, raises a very good question. Without Russell Westbrook, is Kendrick Perkins obsolete?

Now, before you flip back over to Facebook, let me explain my case. This isn't me arguing that Westbrook was the key to Perk's offensive effectiveness. Perkins wasn't offensively effective anyway, and he'll generally get a few open shots regardless of who he's playing with. My argument is that without Russell Westbrook, ball movement and control becomes so essential for the Thunder that they can't afford to have two non ball handling bigs on the floor at the same time.

Before we get into Perk's turnovers, I'll state that two of them were moving screen calls. It's hard to know how strict the refs are going to be on those plays (because Perk sets several moving screens every game), so I'll ignore those plays for now. But in his three minutes, he managed to basically turn over the ball three times. Take a look below. 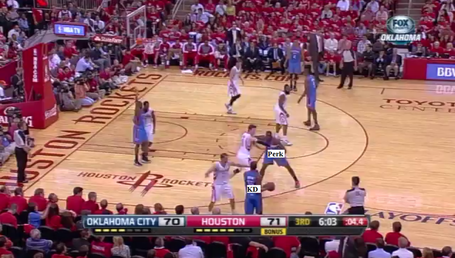 This turnover was pretty silly. Perk tries to catch the ball, but it slips out of his hands for whatever reason. 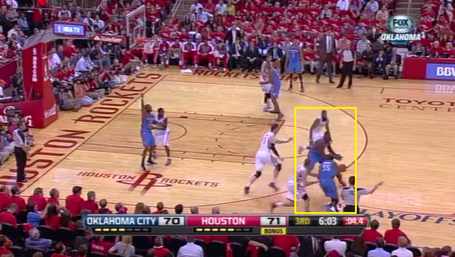 It bounces off his leg, Harden picks it up, transition dunk. 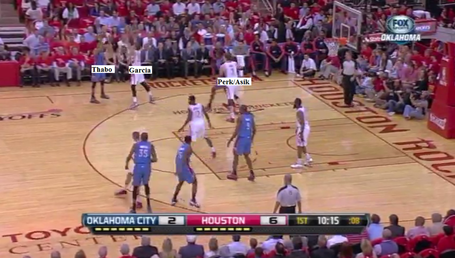 This wasn't credited as a turnover by Perkins, but it should have been. Here, you see Thabo Sefolosha with the ball, motioning for Perk to back into Asik so he can receive the ball in the post. 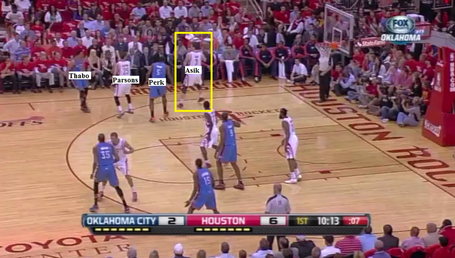 But, instead, Perk comes out closer to Thabo. This makes no sense, because Parsons could have turned around and pressured him really easily. Thabo throws the ball expecting Perk to have backed up. As a result, the ball goes directly to Asik. Turnover. 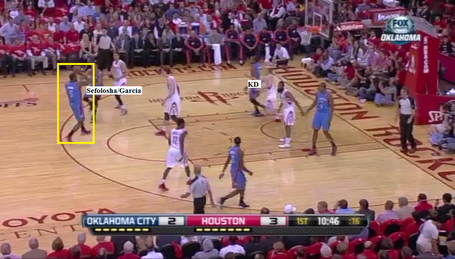 This one's another silly turnover. Perk ignores the easy pass to Sefolosha and attempts to lob it down to KD in the post. The baseball pass goes over KD's hand, and it's a turnover.

As if those three plays alone weren't enough for a case against Perk, you could also look at the countless number of other plays where he wasn't involved. Sure, he comes out to set screens, but there are definitely other plays where he just stands on the block the entire time, doing nothing to move the ball. Even when he gets the ball, all he can really do is act as a passer, because the pressure is way too high for him to move the ball.

But I'd like to shift the discussion from the offensive to the defensive. Perhaps Kendrick Perkins isn't obsolete because of his inability to move the ball, but instead because of his poor help defense? 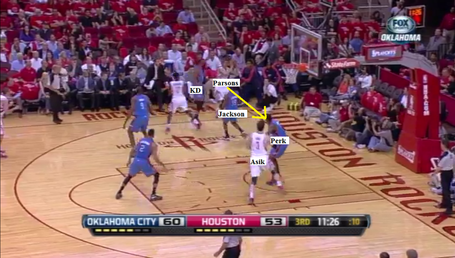 Here, Parsons has the ball on the corner. He just faked out KD, who is currently flying past him. Reggie Jackson is there to stop him, but he's backing up and Parsons has the head start. At this point, Perk is the Thunder's best bet at stopping a Parsons drive. 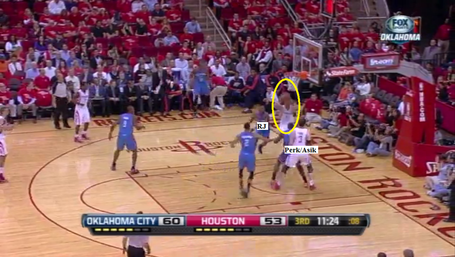 But, instead of helping, Perk stays back on Asik. This basically gives Parsons a wide open lane, since Reggie Jackson couldn't stay with him. The result is an open Chandler Parsons dunk. 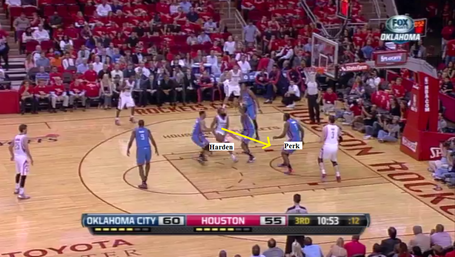 James Harden is driving the lane. He's already gotten past Thabo, and Reggie Jackson has stepped in to help. However, Harden has a full head of steam and is about to slide right past Jackson. Perk, instead of moving to help, backs out of the way and stays on Asik. 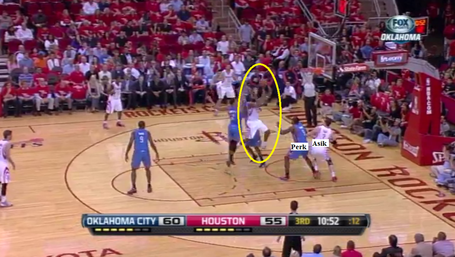 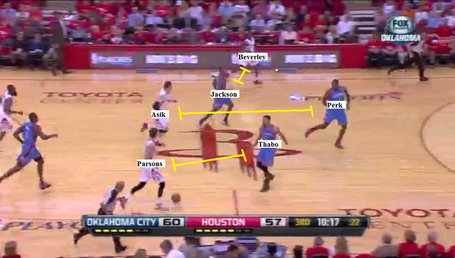 Here, we have a fast break. Everybody seems to understand their matchup, with Jackson on Beverley, Perk on Asik, and Thabo on Parsons. 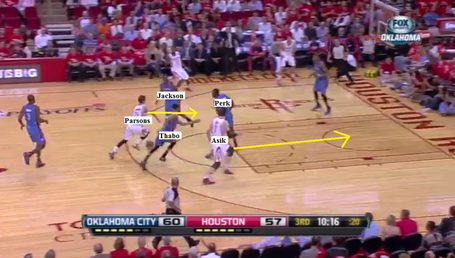 But, something wonky happens. Parsons switches sides of the floor, and three players come to stop him. Both Jackson and Perk leave their matchups before Parsons has even crossed the three point line, leaving Parsons with two very dangerous options. Beverley is open on the wing, and Omer Asik is wide open next to the basket. 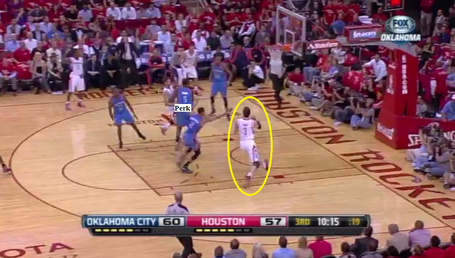 Unsurprisingly, Asik gets the ball and nails an And 1 layup, because Thabo foolishly slapped his hand as he went up. It's arguable that Perk did the right thing in moving over to his matchup, but he did it far too early. He should be meeting Parsons at the basket, not at the top of the key. 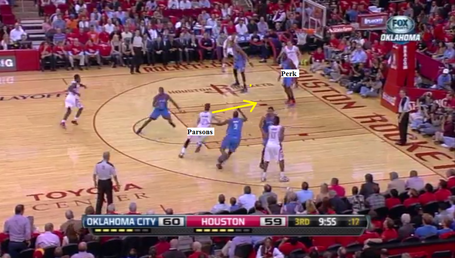 As per usual, Chandler Parsons has faked out Ibaka and driven the lane. Sefolosha is rightfully staying home on Harden, so Kendrick Perkins needs to step up in the lane. 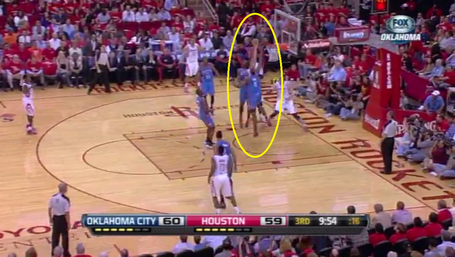 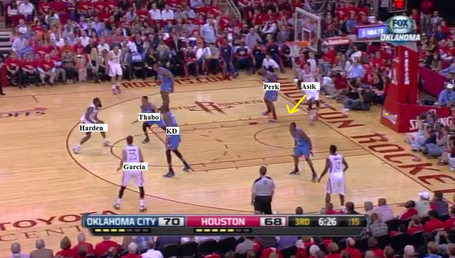 Harden is at the top of the key, with an isolation play on Thabo. KD comes over to help pressure Harden, who will hand it off to the newly freed Garcia. But, that's not the most important part. Kendrick Perkins has lost track of Omer Asik near the rim, allowing Asik to basically sneak in front of him and get great positioning. 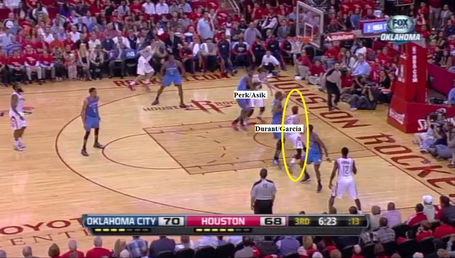 The result is another disaster. Francisco Garcia gets around the pressuring Durant for an And 1 layup. Perk could have helped prevent the play, but he's now stuck behind Asik. Furthermore, if Garcia were to miss, Omer Asik would be in the perfect position for a rebound and putback.

The scariest part about Perkins' role in the above five plays is that he wasn't even taken away from the rim. As we saw in parts of Game 2, the Rockets were deliberately running screens with Asik in order to get Perkins out on the perimeter. Here, the Rockets weren't even concerned with that. They let him camp in the paint and got by him every single time.

Obviously, Perkins has been able to be a defensive factor in the past, as you can see in these plays from Game 2. But it's really hard to know which way he'll swing. Sometimes he'll be the perfect rim protector, always there when you need him. Sometimes, he'll be too jumpy and pressure somebody out on the perimeter for no reason. Other times, he'll stay home on his man and cease to be a defensive factor.

Plus, you can't forget that putting Perk in forces Serge Ibaka to guard Chandler Parsons. This presents problems in more ways than one, because Parsons has the shot and footspeed to get around Ibaka every single time, and Ibaka doesn't have the skillset to punish Parsons on the block.

When you take into account Perk's offensive role, he becomes even more of a wild card. As stated above, he limits the Thunder's ballhandling options, which is critical against a team that's capable for forcing you into 20+ turnovers. He also provides almost no points against a high-scoring team.

But when you look at the bigger picture, you see that the Thunder absolutely must find a way to control the ball. They're losing the rebounding battle, especially offensively, and they're cutting it even when it comes to turnovers. That means they have to rely on their shooting percentages to carry them through a game, which isn't a good thing when the team gets less open shots than it used to.

The way I see it, the Thunder have to deal with the Rockets in one of two ways:

1. Play them big and control the boards. This is gambling with Kendrick Perkins, but it's the easy way to win.

2. Play them small and control the ball. This one's a gamble too, mostly because the Thunder are one of the most turnover-prone teams in the league.

More than likely, the Thunder won't pursue one strategy or another, because Scott Brooks is adamant about his rotations. Instead, they'll switch back and forth at certain times with varying degrees of success. But it's doubtful that they'll get the best of both worlds. The Rockets will generally do well against one or the other, and the problem will be exacerbated by the Thunder's non-commitment to either strategy. This means a tight game, but that's what we've had all series, no?

What do you think of Perk's role with the team? What should the Thunder do to contain the Rockets? Let us know in the comments!