To Perk or Not to Perk? That is the Question.

Perk made some errors in Game 2, but he's essential to the Thunder's success.

Share All sharing options for: To Perk or Not to Perk? That is the Question.

Mike Prada recently wrote an article about the problems Kendrick Perkins faces against small lineups. It's a solid article that you should definitely check out, but I don't think that his conclusion is necessarily correct.

I'll quote it here for reference:

What's the solution, then? It depends on how you look at it.

Schematically, the Thunder need their bigs to stop pressuring the ball so much. I know it goes against the team's defensive ethos, but the easiest way to turn Perkins into even more of a liability is to force him to defend in space far away from the basket. The Thunder may surrender some open mid-range jumpers, but that's the tradeoff they have to accept. Imploring Ibaka to think more about stopping a play before it happens rather than just reacting to it would be nice, too.

But the Thunder -- and I know this is a broken record to some -- should also consider playing Nick Collison more. Collison has the positional chops to avoid getting out of position like Ibaka, and he has the lateral quickness to be a bit more effective defending a guard in space like Perkins. A closing duo of Ibaka and Collison is probably Brooks' best bet at this point.

Regardless, a solution must be found. There are too many good teams that are too good playing small for Oklahoma City to continue doing what they're currently doing.

1. Perkins has a massive effect on the Thunder's rebounding ability.

2. In terms of sheer +/- ratio, Kendrick Perkins was the best player on the Thunder last night.

Let's delve into both of them, shall we?

This is hard to describe, because he's actually a very poor rebounder. He doesn't box out enough, sometimes letting smaller guards by to snatch a board. And on the offensive boards, he's not athletic enough to be a factor. However, he generally keeps track of the opposing center, and his ability to keep Asik off the boards was a huge help. His handling of Asik also frees up Serge Ibaka, who now has a much easier job outreaching the undersized two that Houston matched up against him.

Now, let's look at it from the Asik perspective. In the 21.5 minutes both Asik and Perk were on the floor, Asik had 8 rebounds. That's a rebound every 2.7 minutes. In the 13 minutes Asik was on the floor on his own, he had 6 rebounds. That's a rebound every 2.2 minutes. I know, it's not a huge difference, and it's not a huge sample size. But you could also consider that two of Asik's three offensive rebounds came with Perk off the floor, and that Asik was only 1-4 when Perk was on the floor.

At this point, I'd normally go to concrete examples and try to pinpoint certain moments where Kendrick Perkins helps out the team rebounding. But it's something that's incredibly hard to illustrate. A lot of the time, Ibaka will grab the rebound with what looks like no help from Perkins at all. Perk is actually helping out, though. Basically, he's out on the perimeter with Asik, allowing Ibaka to beast over the smaller Rockets and get the board. Other times, it's more obvious, but it's still hard to see the exact effect he had on the play. So I'll refrain from providing them for now.

Anyway, let's get into the second point I'd like to make. Kendrick Perkins had the best +/- ratio of any Thunder player last night, and there's a reason for that. We all know that his defense was a bit faulty in the first and fourth, which is where Prada's examples came from. But you'll note that none of his examples that criticize Perk came from the third quarter, where he was actually able to play rather effectively. Below, you'll find five separate plays in which Perk was able to cover for other player's faults and stop a player in their tracks. 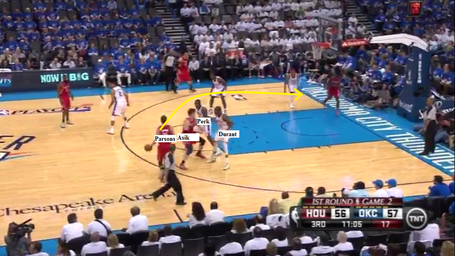 Here, you can see that Persons, the ball handler, is getting a pick from Asik. He fully expects Kendrick Perkins to switch onto him, which he does. 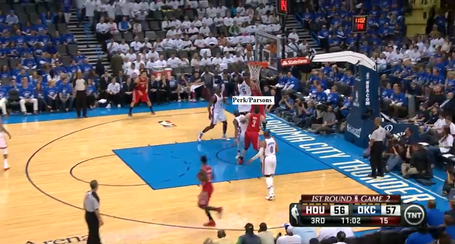 Seeing an opportunity, Chandler Parsons charges the lane, hoping to get an open layup. But Perk is there to defend the shot, and Parsons misses. 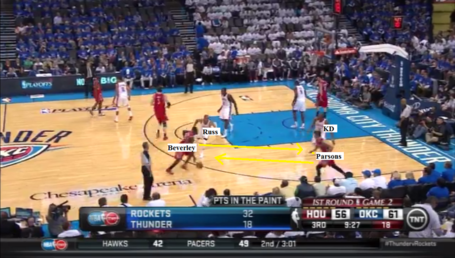 Parsons and Beverley set up the play by running at each other on the wing, handing off the ball while doing so. The Thunder defenders switch. 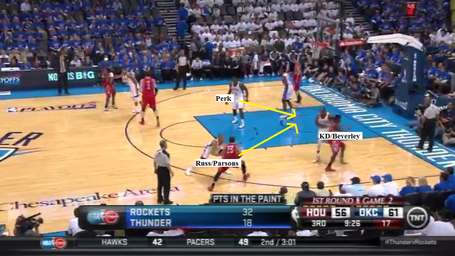 The switch doesn't work effectively though, as Westbrook waits for Parsons to run to him. Parsons responds by cutting inside. Perk sees that play in action, and move to stop Parsons. 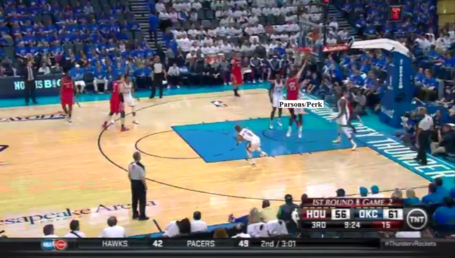 Bam. Perk is there to meet him at the rim, and Parsons misses the layup. 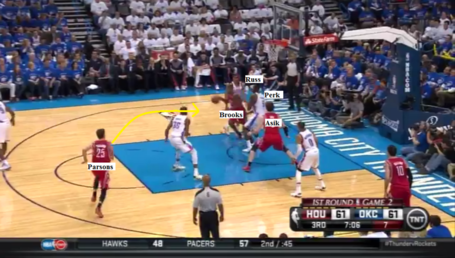 Here, the extremely quick Aaron Brooks basically ran around Russell Westbrook on the baseline in order to get into the paint. Perk was waiting for him there, so he bails out. Chandler Parsons sees an open lane, and runs in to receive the pass. 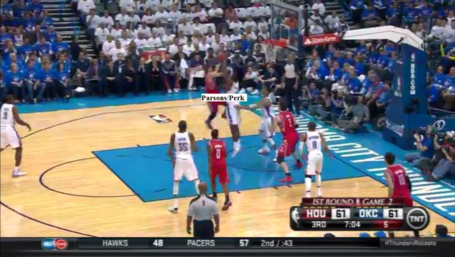 Bang! He's met by Perk at the rim, and misses the tough layup. 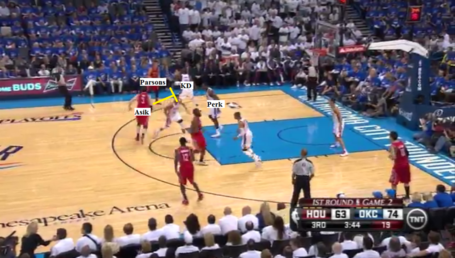 Here, Parsons starts what seems like a traditional pick and roll play, trying to use Asik to get to the center lane. But, instead.... 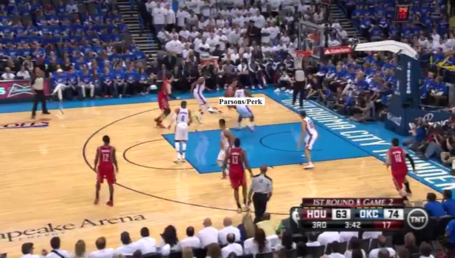 He cuts to his left, leaving KD in his dust. But Perk, smartly, stays low and meets Parsons at the rim. Parsons misses the shot, but it's tipped back in immediately afterwards (something which isn't really Perk's fault). 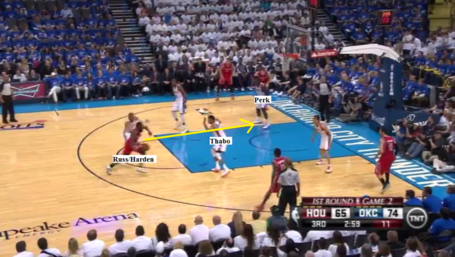 A simple iso play for Harden at the top of the key sees him drive the lane. He fakes past Westbrook, and Thabo comes over to help. But with Harden's speed, it looks like too little, too late. 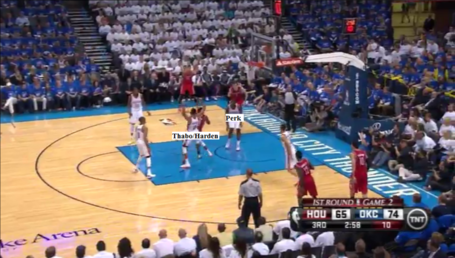 Fortunately, Perk steps in and alters Harden's shot, forcing him to miss.

I'm not here to say that Mike Prada's article is totally wrong. The plays he points out are very critical, and Perk's tendency to go out on the perimeter and needlessly pressure can really hurt the Thunder defensively. But, as he openly admits, putting Ibaka at Center simply isn't a viable solution. And this isn't only because of the fact that Ibaka needs to learn defensive positioning. It's also because of the reasons of rebounding, which I mentioned earlier.

Moreover, I don't think a Collison/Ibaka lineup is totally viable, either. Collison might have a higher basketball IQ than Perkins, but he's 20 pounds lighter in size and a worse rebounder. That's essential when you're going up against a guy like Omer Asik. Furthermore, Ibaka has played with Perk over three times the amount of minutes he's played with Collison this season. Perk and Ibaka have played together for three years, and communicate very well when defending the post. Also, Collison needs to play with the bench, because he's been working on getting open shots with Kevin Martin, who desperately needs to up his production if the Thunder are going to move forward.

The earlier solution presented by Prada is much more sound. The Thunder simply need to have Ibaka and Perkins hang around the post more. When they do, the defense flourishes, and they can overcome offensively barren nights more easily.

But, it doesn't stop there. The Thunder need to lock down the post, and stop playing small. I know I've said this a hundred times, but benching Derek Fisher and giving spot minutes to a guy like Thabeet or Orton would do wonders. The Thunder didn't lose control of this game on three point shooting or guard play, they lost it on poor rebounding and post defense. Size helps that, and could help the Thunder lock down certain areas so they could weather a bad storm.

In any case, the Thunder definitely need Perk if they want to win a title. More than anyone might know.

What do you think about the abilities of Kendrick Perkins? Let us know in the comments!