2013 NBA Playoffs: Kevin Durant is tired of coming in 2nd, uses analytics to get to 1st

Sports Illustrated features Kevin Durant on the cover this week, and he's talking about how analytics have improved his game.

Share All sharing options for: 2013 NBA Playoffs: Kevin Durant is tired of coming in 2nd, uses analytics to get to 1st

As we're now all aware, Kevin Durant is featured on the cover of Sports Illustrated this week. The mag features an epic quote, to which I agree with Andrew Sharp - if the Thunder win the title, this is becomes the greatest Sports Illustrated cover ever. 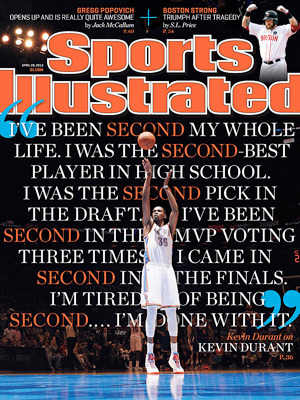 (Of course, WTLC already has a follow up to that cover, featuring Russell Westbrook, Serge Ibaka, and of course, Joey Crawford.)

Ben Golliver, he of SI as well as Blazers Edge, grabs some great quotes from the story, which I'd encourage you to check out in their entirety. One that jumped out to me though was the following:

Kevin Durant sat in a leather terminal chair next to a practice court and pointed toward the 90-degree- angle at the upper-right corner of the key that represents the elbow. "See that spot," Durant said. "I used to shoot 38, 39 percent from there off the catch coming around pin-down screens." He paused for emphasis. "I’m up to 45, 46 percent now."

Durant has hired his own analytics expert. He tailors workouts to remedy numerical imbalances. He harps on efficiency more than a Prius dealer. To Durant, basketball is an orchard, and every shot an apple. "Let’s say you’ve got 40 apples on your tree," Durant explains. "I could eat about 30 of them, but I’ve begun limiting myself to 15 or 16. Let’s take the wide-open three and the post-up at the nail. Those are good apples. Let’s throw out the pull-up three in transition and the step-back fadeaway. Those are rotten apples. The three at the top of the circle — that’s an in-between apple. We only want the very best on the tree."

I read this quote and thought, "Well, that makes sense. Metrics and analytics matter more now than they ever have," and then I let it go. However, after perusing the Twitters and the Facebooks, I put 2+2 together. 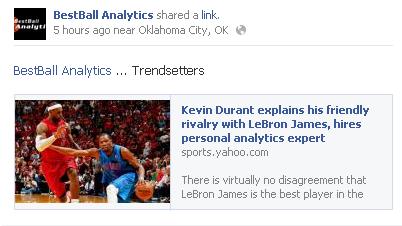 While my evidence is circumstantial, I do believe that SI's Lee Jenkins' reference to an 'analytics expert' is a nod to our friend Justin Zormelo of BestBall Analytics.

If you have been with us over the past couple years, you might remember this exclusive interview that Zormelo gave us:

Kevin Durant: Training to the Next Level

I'd encourage you to check out that article to get an idea of not only what Zormelo is about, but how he really bases his work on his relationship with his athletes. Zormelo is part of Durant's inner circle and will travel with him to make sure KD is always on point. 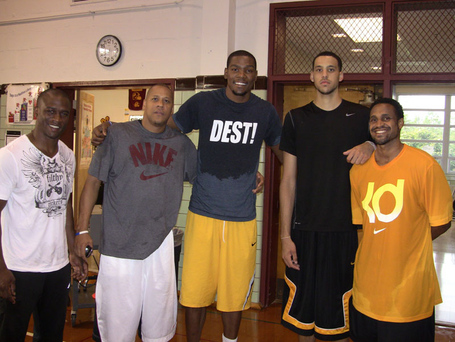 As Durant's mental game improves and his statistical lexicon grows, the next step is for him to pair his own metrics with that of his team so that both are concurrently optimal. Once Durant gets to that point, his arrival as a fully operational basketball battle station will be complete.