As the curtains were finally raised on the beginning of this playoff season, the Thunder fans were ready.

Share All sharing options for: 2013 NBA Playoffs: Tip-off at the 'Peake

In case you haven't heard, the NBA playoffs started this past weekend on Saturday. We heard the Oklahoma City Thunder players talk about being ready and excited to begin what they call, "the second season." Kevin Durant told reporters after a practice session that the team knew what to expect in the playoffs and that they were looking forward to it. The Thunder got their chance late Sunday night at the Chesapeake Energy Arena against a worthy opponent, the Houston Rockets. 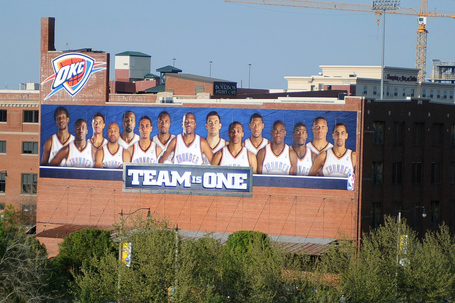 But what about the Oklahoma City fans? This is the 3rd consecutive year that the Thunder has hosted the playoff opener (Round 1, Game 1) on their home court in the arena that they affectionately call, "the Peake." There are things that Thunder fans have come to expect also. The atmosphere inside the arena was electrifying, turned up another notch than a regular season game. Oklahoma City fans get ample accolades for being loud and supportive of their NBA team during the 82-game season, but the playoff crowd is a different animal, much like the playoff season itself. 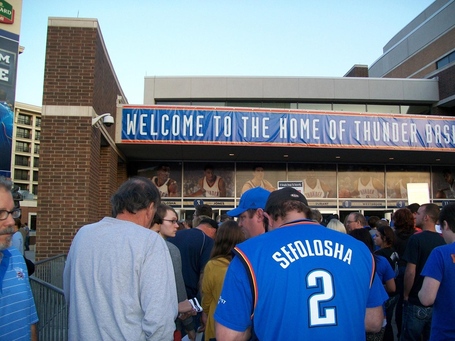 Sunday night, the crowd was deafening and on their feet before the Thunder hit the floor. Towels swung in the air as the Thunder players warmed up and that type of intensity continued throughout the game. They seem to understand the importance of every possession in this playoff game. And of course, there were boo's, a rumbling and cantankerous homecoming gift for their once-beloved James Harden, but his was different from his return earlier in the season. The Oklahoma City crowd greeted him back then with a splattering of applause that seemed to congratulate him for what he was accomplishing in Houston. 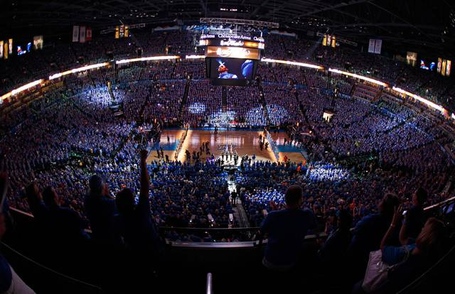 On every foul called for or against Harden and on every missed or blocked shot, the crowd at the 'Peake let James Harden have it. The love affair is officially over, at least during the playoffs. Round 1, Game 2 is scheduled for Wednesday, and the fans will have more in store for The Beard.

A local Oklahoma City reporter asked Russell Westbrook about the long wait until Wednesday night to play again. Westbrook responded, "However it goes. We got to take it as is." He will have to wait and prepare himself mentally to be ready to play in three nights. Oklahoma City Thunder fans will wait also, going about their regular routines until it's time to Thunder Up again, to power-clap support for their team, and to bring the Thunder loudness to the 'Peake for the second home playoff game of this season.