Can the Thunder Endure a Kevin Martin Winter?

We break down what happened to Kevin Martin last night, and how to make him into a good scorer.

Share All sharing options for: Can the Thunder Endure a Kevin Martin Winter?

Watching the Thunder play the Rockets last night was a great joy. The Thunder ran away with the game at the beginning of the third, and both teams got to empty their bench while Oklahoma City celebrated.

But one thing remains painfully evident. The Thunder's bench simply cannot score on its' own. It wasn't so much a problem tonight, and probably won't be a problem against the Rockets. But, what about later in the playoffs? The bench was basically able to give up a 12 point lead in just a few minutes of play, and didn't see the floor again until the game was well in hand. That won't fly as the grind of the playoffs wears on.

I've already talked about how Scott Brooks is pretty much attached to a set rotation of 9-10 players, and how it could seriously hurt the Thunder in the playoffs. But, it's too late to work new players into the rotation at this point. What do the Thunder do?

Obviously, the key to kickstarting the Thunder's offense lies with Kevin Martin. Nick Collison and Derek Fisher can score, but they're both extremely limited in what they can do. Reggie Jackson is able to get his own points, but he's still learning the ropes and doesn't have enough of a shot to be a regular factor.

The burden, then, lies with Kevin Martin. The guy basically has to be a jack of all offensive trades, providing the majority of shots for a group of four players. If you need evidence of his value, the Thunder's record when Kevin Martin takes 10 or more shots and shoots over 45% (his average) is 20-4. In other words, that's a .833 win percentage, compared to the Thunder's actual win percentage of .732.

Now, that's not to say the Thunder can't overcome bad shooting from Kevin Martin. Their record is still rather impressive when he shoots badly or not at all. Last night's game is a perfect example, as he was clanking wide open threes and fumbling easy layups. But the entire team was scoring with such regularity that his 5-15 shooting performance didn't even matter.

What's the problem? You could pinpoint it on a variety of factors. This is his first playoff game since 2006, when his Kings endured a first round loss to the Spurs. Perhaps he's struggling with a back injury which supposedly kept him out of the final three games of the season. (Yes, it sounds fishy, but we only found out after the playoffs last year that Kendrick Perkins was suffering with a groin tear.) Maybe he simply wasn't utilized correctly, and didn't play to his strengths. Heck, maybe he struggles against Houston. Indeed, he's only shooting 41% against them this year. He especially struggles against them when shooting inside the arc, making only 39% of his shots.

There's no way I can account for the first two possible reasons, because I can't get inside of his head, and I can't look at his X-Rays to determine whether he's really hurt or not. I also can't account for his missed threes last night, because a lot of them were wide open. But I can take a look at his two point plays, and try to understand why he went 3-9 from inside the arc. 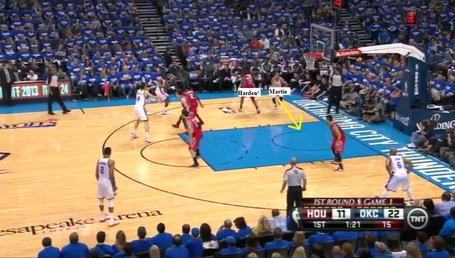 Martin sneaks behind James Harden, who has his back turned. He soars unhindered to the cup for a wide-open jam. Perfect example of the off-ball cut that he utilizes so well. 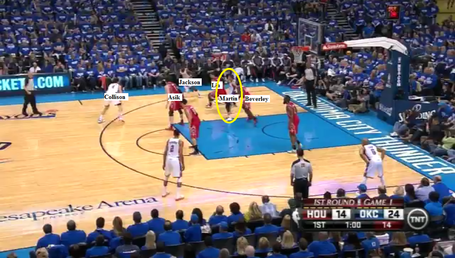 Martin is given a mismatch with Patrick Beverley. He attempts to exploit is by getting fed the ball in the post, but Collison doesn't want to make the risky pass. 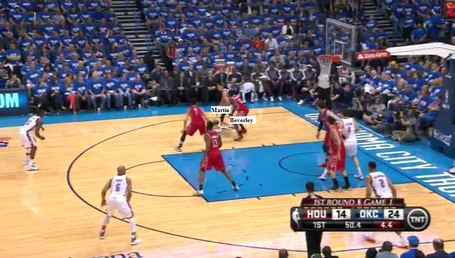 Eventually, Collison clears out and Kevin Martin is given the ball on the wing, as if it were a Kevin Durant type play. He tries to back down Beverley and nail a turnaround jumper, but he fails. This shot simply isn't his game, even when facing a smaller player. 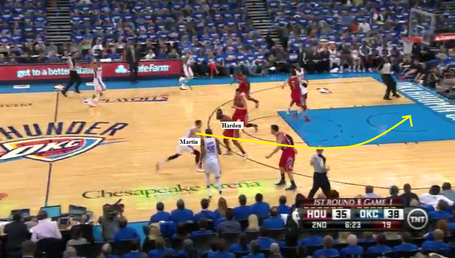 Kevin Martin rebounds the ball and jogs up the floor. He has space and sees that Harden is the only thing hindering him from reaching the basket. He runs straight around Harden.... 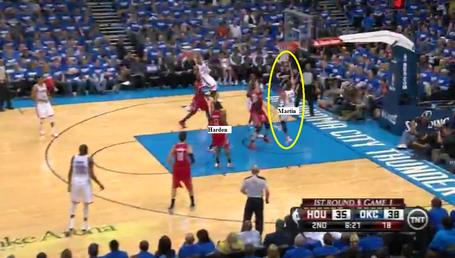 And gets a wide-open layup. For some reason, he totally botched the shot, but it was a good play that will probably work 95% of the time. 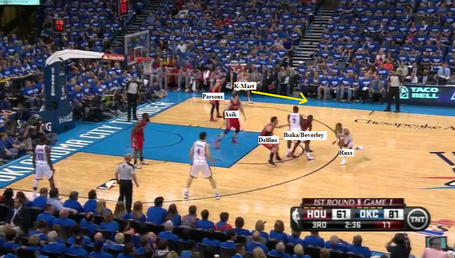 Russell Westbrook gets a screen from Ibaka, distracting Houston's defense in his direction. Asik is back in the paint, playing zone defense. This isolates Kevin Martin, who is able to use his speed to get around Parsons.... 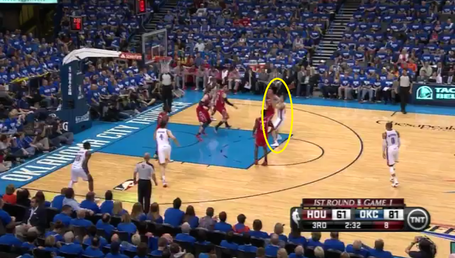 And spot up for a quick free-throw line jumper. The shot goes in like smooth butter. Kevin Martin is excellent at using his speed to run up to a spot and pop a shot, as this play exemplifies. The use of Kevin Martin in motion helped as well, because he didn't have to stare down his defender like in an iso play. 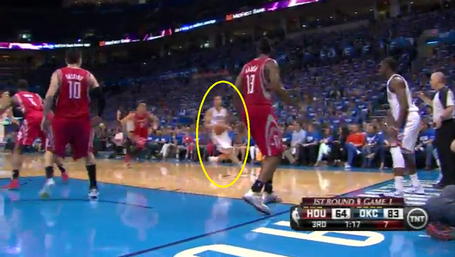 TNT didn't show this play very clearly, but Kevin Martin basically tried the same thing he did in Play 4. He ran around the defense and received the ball on the wing. He barely had enough time to release it before Chandler Parsons swatted at it, and the shot came up short. He might have been better served by a pump-fake, but he still got off a semi-good shot. 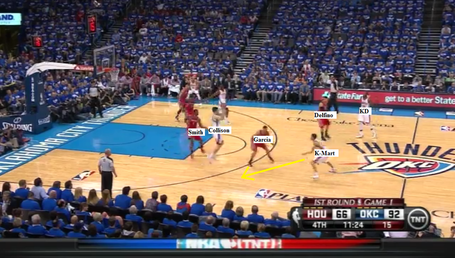 KD brings the ball up the court, and K-Mart calls for some two-man action with Nick Collison. KD lobs it to Collison, and K-Mart goes to the wing. 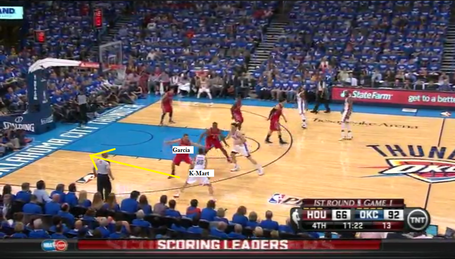 Collison hands it off to K-Mart, who proceeds to run around Francisco Garcia and get an open shot on the baseline. It goes in. Again, Kevin Martin uses speed and his ability to pop off a quick shot for a successful play. 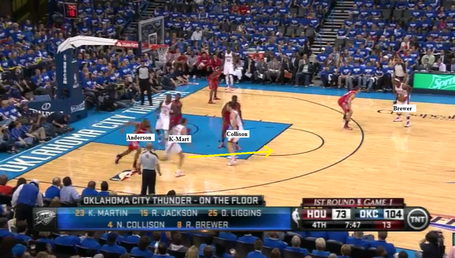 Ronnie Brewer holds the ball on the three point wing, while Nick Collison sets a pick for Kevin Martin. 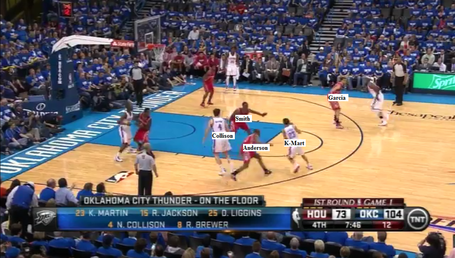 Sadly, he receives the ball too high on the post. Instead of coming out to the free throw line, he's stuck in this no-man's land next to the three point line. Shooting would be really inefficient at that range, so he has to go down to the paint. 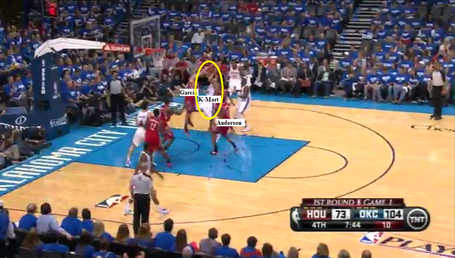 Garcia snuffs out the play before Kevin Martin knows what's happening. Martin succeeds in getting around Anderson, but meets with Garcia in the paint and misses the layup. I can understand driving the ball where there's space to do so, but this is really a foolish play in traffic, and a bad job by Ronnie Brewer by not staying out for the open shot. 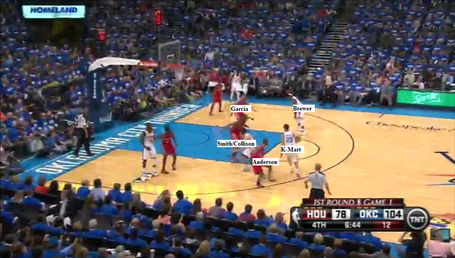 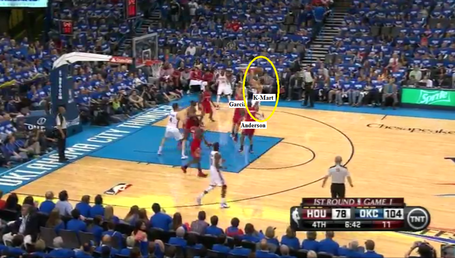 He doesn't drive to the hole this time, but he's really indecisive about his jumper, only rising up when two defenders get to him. As a result, he misses a really tough shot. Meanwhile, Ronnie Brewer is standing behind Francisco Garcia uselessly. 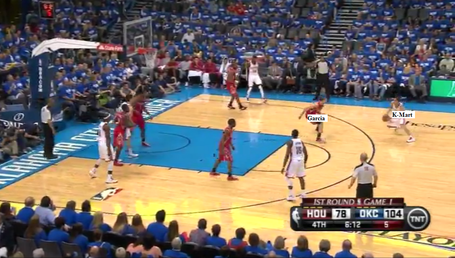 Kevin Martin is in a pinch here, receiving the ball with only 5 seconds left on the shot clock. Reggie Jackson had tried to run a pick and roll twice to no avail, and Kevin Martin was looked to as the emergency option. 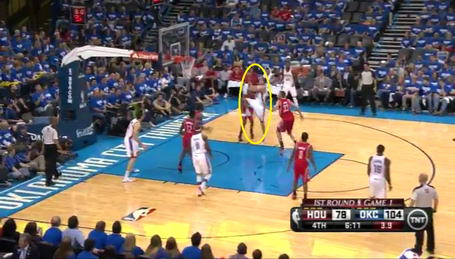 Again, he responds by driving the ball into the paint. It might look like he has an open shot here, but right after this screen cap, Greg Smith rose up and altered his shot. K-Mart had to float the shot over his hand, and he missed a tough layup. Meanwhile, DeAndre Liggins is open on the perimeter.

From the above, we can determine a number of things. Kevin Martin is quick and sly, and is excellent at pulling up for jumpers. He's also excellent at using his speed to get to the bucket. This works best when the Thunder are on the fast break or when Kevin Martin is working off the ball. However, when the Thunder are in a pinch, doing some pick and roll or two-man game with Nick Collison can work as well. Isolation plays, on the other hand, are the exact opposite of what should be called for him.

One thing Kevin Martin needs to improve on is his decision making. His plays work best when he knows exactly what he's going to do, because they all rely on speed. Kevin Martin isn't an imposing physical specimen, so when he hesitates, he's often going to come up against a defensive brick wall. Moreover, he needs to work on finding the open man. Sometimes, defenses are going to sniff his plays out, and shooting a low percentage shot while covered isn't exactly going to help matters. If he could have his plays set to where he has easy passing options, like a shooter in the corner or a big on the opposite side of the paint, it would do wonders for his offensive game.

What's my overarching point here? Well, I suppose the point is twofold. The first is that Kevin Martin is an excellent scorer, and that the Thunder can definitely survive with him heading up the second unit. But my second point is that he's not very creative. He needs to have specific plays set up for him so he can use his speed to his advantage. Isolating him and forcing him to do something on his own often leads to failure, because it relies on him making a tough shot or simply outrunning his defender. The iso plays should go to Reggie Jackson, who's a lot more talented in that area.

We all have bad offensive nights, Kevin Martin included. I'm willing to chalk up last night's performance as a case of the jitters. But unless somebody can step up while the bench are on the floor, the Thunder are going to suffer. And I don't know if a benchless team can win a championship.

What do you think of Kevin Martin's performance? Can he lead the bench? Let us know in the comments!