Russell Westbrook is you huckleberry as Welcome to Loud City gets ready for round one of the NBA Playoffs.

2013. The regular season is over and the resulting basketball schedule spurs the great migration west. Farmers, ranchers, Rockets, Grizzlies, Spurs, and even Lakers seek their fortune. Fans turn the run of the mill matchup into obnoxious and piercingly audible cheering contests in the stands with sound levels higher than those of modern day SEC college football games. Out of this chaos comes legendary small forward Kevin Durant. Durant's point guard, Russell, Doc Westbrook, a southern gentlemen turned clothes horse and bon vivant, also travels west, hoping the current climate would allow for a title run. A Western Conference title run is discovered in Oklahoma City. Bricktown and downtown OKC become queens of the boom towns where the latest Paris fashions are worn in post game press conferences. Attracted to this atmosphere of winning, an exiled shooting guard and some Texas outlaws band together to form a ruthless gang recognized by the red jerseys they wear. They call themselves Rockets. 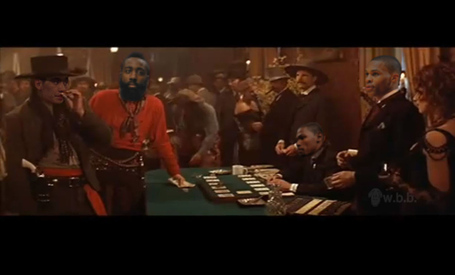 A cocky bearded man in red approaches the pharaoh table. "Kevin Durant, huh? I've heard of you." A stoic Durant looks up from the cards to see a group of Rockets. He gives a cold head nod to the bearded Harden but before he could say anything a seemingly drunk Chandler Parsons butts in. He mutters something about a Mr. Kansas Frontcourt Dog, but Durant tells him that he's not Nick Collison along with a terse, "Shut up, Parsons." 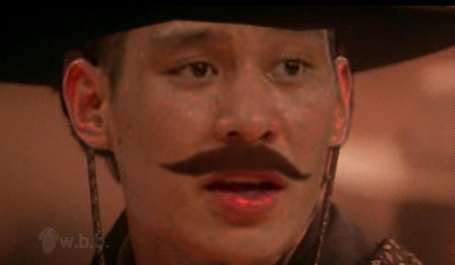 As Parsons sulks away Jeremy Lin enters the scene, staring right through Westbrook with crazy-eyes. He says nothing but the look on his face is daring Westbrook to say something, anything, to provoke a fight. "You must be Jeremy Lin. Look, darling, it's Jeremy Lin. Trendiest pistoleer since Pete Marovich. Should I hate him? I don't know, he reminds me...of me. Yes, I'm sure. I hate him." Durant interjects, pleading with the group to settle down only to concede the floor to Westbrook for a second time. 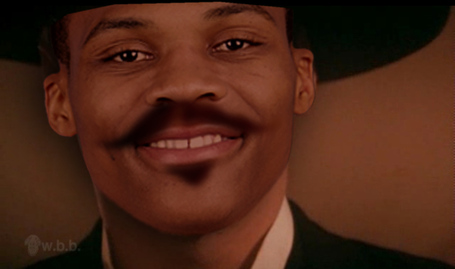 "Non potes me custodiunt. In iso veritas". Westbrook was enjoying himself. While clearly exhibiting some arrogant behavior, he carried himself in such a way that it came off more charming than boastful. Lin clearly takes things more seriously and responds, "Eventus stultorum magister.". Taking little time retort, Westbrook shoots back "In pace requiescat" with a smirk. 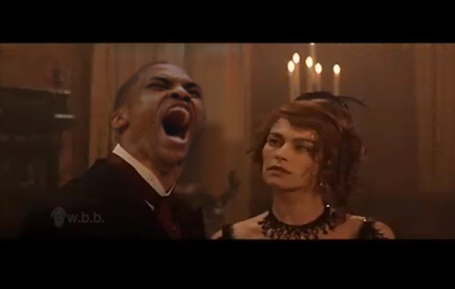 Russell, pleased with himself and with getting under Lin's skin, turns to a Thunder Girl. "That's latin, doll. Evidently Mr. Lin's a Harvard educated man. Now I really hate him." 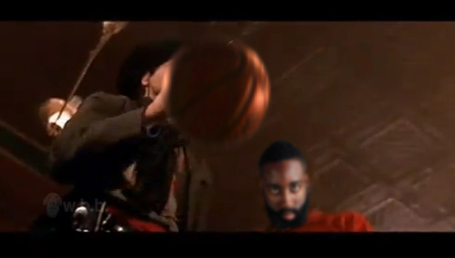 Lin was well aware of what Westbrook was trying to do, but he didn't care anymore. In a split second, he whips out a basketball and begins doing a spectacular display of the crab drill. Throughout the exhibition of talent, Lin never breaks eye contact with Westbrook.