The 2013 NBA playoffs kick off tonight for the Thunder in their quest to get another shot at the title. Standing in their way - their one-time brother-at-arms, James Harden. What's going to go down when the Beard is back in town?

From the moment when the Oklahoma City Thunder grimly and defiantly watched the clock run out on them as they observed the Miami Heat begin to celebrate winning the championship, a lasting image has been emblazoned in our minds ever since. I'm sure you remember it. It's this one: 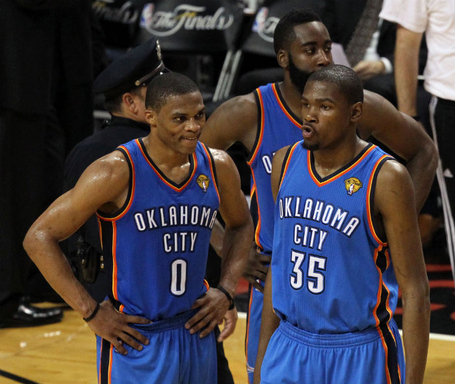 Durant is trying to keep his emotions in check, Harden is playing it cool, and Westbrook looks like he wants to fight a mountain lion to let off some steam.

That lasting image that we had, as our hopes ran out with the clock, was supposed to sustain us through a long off-season and a longer regular season. The trio was supposed to be together to seek out vindication, to finish what had been started.

The trio is together again, ready to begin the long trek back to the finals. What a cruel jape it is that one of them is in the wrong colored jersey.

Here we are though, and perhaps this is the only way it could be. The departed brother has returned to the town that helped make him what he is, and now it is his responsibility to show OKC how wrong they were to let him go. Meanwhile, the Thunder have the decided opportunity to show not only James but the entire league that they knew what they were doing when they traded him away.

What will we be in for tonight? I will be paying attention to 3 elements:

While game 1's are typically a "feeling it out" game and the offenses may be a bit rusty, I believe that the Thunder are going to seek to send an early message to the Rockets that they are entering a playoff world to which they are unaccustomed. Playoffs? 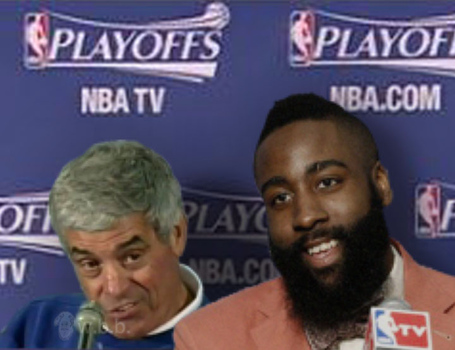 These games are a different animal all together, and the Thunder need to treat it as such. Perhaps that is why they lost in a shoot-out to the Rockets on February 20th; it was not that they had played poorly, but that they treated the Rockets as if they could not survive a simple run-and-gun track meet.
However, if the Thunder are locked in defensively and are seeking to control the game by marginalizing Harden, they stand a good chance to jump on Houston early and get their playoffs started off on the right foot. To do otherwise gives an 8th seed, which is no longer a playoff death sentence, a glimmer of hope that could change the complexion of everything.
Game 1 is finally here.