Let's hand out some awards for the Thunder, reflecting on their performance from April 3rd through April 9th.

The Thunder completed a four game stretch over this past week where we saw them go 3-1 against 3 set-in-stone playoff teams (Spurs, Knicks, Pacers), and one potential one (Jazz). On the surface, that would seem to be a very, very good week. However, even with the big victory over the Spurs last Friday, we still have the bitter taste of the Knicks loss to deal with. More importantly, they continued to exploit the Thunder perimeter defense, something that is cause for concern.

Let's hand out some awards though, because it was a pretty entertaining week.

Russell Westbrook finished up the 4 game stretch by averaging over 28 points per game, 6 assists, 7 rebounds, and 2 steals against less than 2 turnovers per outing. Those numbers are outstanding, but he would deserve this award alone for his performance against the Spurs.

Against San Antonio, Westbrook hung a 27-7-7 against a very smart defensive team. While Westbrook has certainly put up these kinds of numbers before, it was a big moment against the Spurs because Westbrook has long struggled with his production against them. On top of that, Westbrook finally settled in and played outstanding defense at the point of attack, moving Tony Parker from sideline to sideline instead of letting him curl off screens and move into open space. Parker scored a mere 2 points on the night, and San Antonio managed only 88 points on the night.

The offense is great, but when Westbrook can lead the defense at the point of attack in the way he is capable - with quickness, strength, and guile but without great risk-taking, it completely disrupts the other team's intentions. When we're talking about guys like Chris Paul, Tony Parker, Ty Lawson, and Mike Conley in the playoffs, this effort is critical to the Thunder's chances at returning to the Finals.

Serge Ibaka is shaping up to be the big X-factor as we head into the playoffs. When the Thunder use him properly, there is nobody else in the league (with the possible exception of LeBron James) who can contend with his physicality and athleticism. The key is that he has to remain engaged.

When Serge IS engaged? He can do just about anything you could ask for from a power forward. He shoots a high percentage from anywhere on the court, he rebounds well, he defends the paint, and as of late, he's been getting his block party on again. He had 5 blocks apiece in the last 2 games, 14 in his last 4, and 22 in his last 5 (thanks to an 8 block night against Milwaukee).

If the Thunder are going to go as far as they like, Ibaka can no longer be a luxury on both ends of the court. He has to be productive in the ways that he can be, and he has to be able to do it every night in order to take the pressure off the rest of the team.

While Russ is doing this after he hits big 3-pointers: 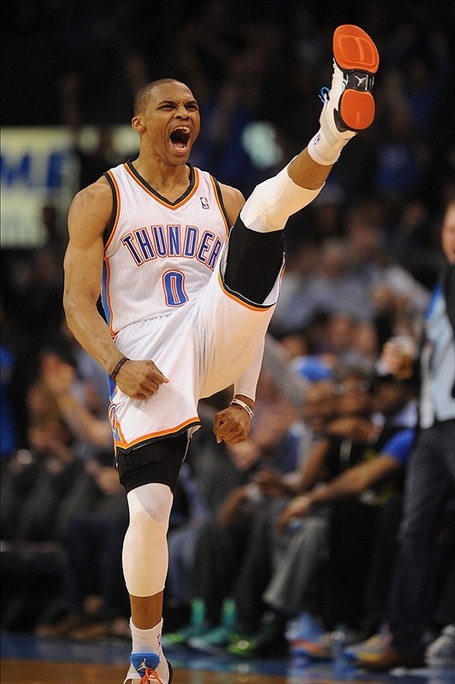 This is what his buddy Durant is doing (mouseover image).

What is that exactly? Shooting the six-guns into the floor? Milking the cow? I don't know, but I plan on doing it any time I come across an Artisan Tostitos 2-for-1 sale at the grocery store.

Derek Fisher has not exactly set the world on fire in his 2nd go-round with the Thunder, and so heading into the Spurs game on Friday, I asked Pounding the Rock main man J.R. Wilco what he thought about Fisher even in his current aging state:

The thing I am most frightened of is Derek Fisher on the floor of a tight basketball game in the playoffs with very few seconds on the clock.

More than anything else, that is what terrifies me.

Now, I scoffed at this remark. That's right. I scoffed. It's Derek Fisher, he of 20+ straight misses, shoddy defense, and by and large just looking past his due date. Why would the Spurs be frightened?

We're splitting this award between what is becoming OKC's 4th quarter backcourt.

Westbrook is in the DANGER ZONE because that's where he always lives, as evidenced by this ridiculous slam:

Jackson also gets props by continuing to look like he belongs on the court in the crunch. Think about that for a moment. Jackson looks completely at ease making plays while along side two of the best players in the world. He adds an entirely unexpected dimension to the Thunder attack, but also does so without suffering a defensive let-down. Jackson is still learning the defensive ropes, but his aggressiveness, length, and recovery effort mean that he's not a defensive liability when things get tight.

The Thunder went 3-1 against 4 playoff level teams, and that's pretty good. However, all anyone wants to think about is their defensive failings against the Knicks, who are currently the hottest team in the league, winners of 13 straight. Was that game really such a big cause for the collective freak-out that we saw? Consider Darnell Mayberry's reaction:

"Not much to say about this one. Not much positive anyway."

So it goes with people who can sometimes get a bit jaded, because what I saw in that Knicks game was some fantastic end-to-end action that featured a bevy of players who were exhibiting their fullest offensive abilities. The Thunder lost, it is true, but it is no terrible thing to lose a regular season game against a red-hot team that they will be unlikely to encounter until next season.

The Thunder are all right.