Russell Westbrook and Craig Sager are two peas in a pod.

It is no big thing, really. Yet in a way it is everything. Russell Westbrook is a media enigma; his body language turns many off, his scowls a seeming detriment to those who think he should be a better leader. But then we encounter stories like this SLAM! profile and we wonder if we know him at all.

You know who gets Russell Westbrook? Craig Sager. 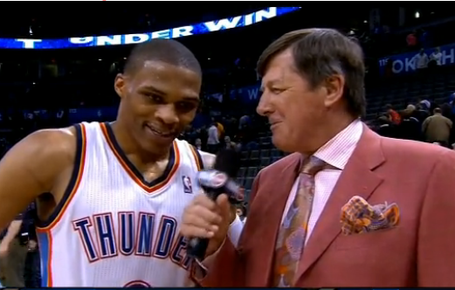 This screen cap, taken from Westbrook's post-game interview, is one of the rare instances where you will actually see the HAM-badger smile while talking to the media, especially on camera. He is notoriously surly when it comes to talking to reporters, but for Sags, he seemed delighted to pontificate while elated from the win.

To be sure, perhaps it is because his team just crushed the Lakers at home (Westbrook is a former UCLA star). For my money though, I think he's happy to talk to Sager because Sags is one of the few men who seem to have the same fashion pursuits as Westbrook does. They are soul mates.