The Thunder once again rode the dominant play of Russell Westbrook to earn another win over a potential playoff foe, knocking the Lakers out in the 4th quarter.

The Oklahoma City Thunder controlled the Los Angeles Lakers at home, winning by a wide margin in the end, 122-105. In a game that was perhaps overshadowed by the Serge Ibaka disciplinary situation, OKC did not let its ominous cloud deter them from attacking L.A. from the outset. The Thunder jumped on the Lakers early, pushed the pace, withstood the late surge, and held on for the 17 point win.

The Thunder were led once again by Russell Westbrook, who finished with a game-high 37 points, 10 rebounds, 5 assists, 2 steals, and only a single turnover. Westbrook was accompanied by Kevin Durant, who once again struggled with his shot but finished with 26 points, 9 rebounds, 5 assists, 3 steals, and 3 blocks. Of particular note, the Thunder bench played exceptionally well, with three different players finishing in double figures (Kevin Martin, Reggie Jackson, Derek Fisher).

The Lakers were led by Kobe Bryant, who despite injuring his elbow early in the game, still scored 30 points. He was followed by Steve Nash, who finished with 20 points and 4 assists.

The Thunder are likely unaccustomed to being the target of public scorn, but such it was today as the NBA decided to go lenient on Serge Ibaka for his flagrant foul on Blake Griffin over the weekend. That outcome is a debate left for another time; for now, we'll just deal with the basketball. If the Thunder were at all rattled however, the team hardly showed it. OKC immediately got into their proper Laker mindset, a strategy that they did not apply as well in their last game against the Lakers.

OKC's formula for attacking LA is pretty simple. The Lakers have nobody on the perimeter who can stay in front of the Thunder's penetrators, so as long as OKC uses that as the basis of their offensive attack, they are in business. On this night, Westbrook attacked from the outset and continued his remarkable HAM-badger run of knowing when to drive, when to pull up, and when to get other players involved. This is Westbrook's shot chart for the game: 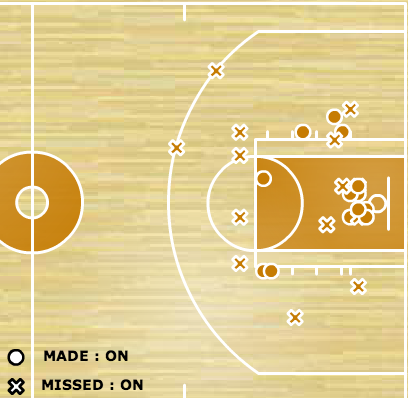 That is an excellent cluster of shot attempts - Westbrook knows exactly where he wants to go against the Lakers defense and he got there with little difficulty.

What I liked most though was that Westbrook's initiative to attack the middle of the lane, even with Dwight Howard floating around, is that it set the tone for the rest of the team. OKC put 6 different players in double figures, including the aforementioned 3 bench players. Reggie Jackson in particular continues to make great strides in his game because his strength is in driving the ball to the rim. He can continue Westbrook's initiative so that the offensive system does not have to change; they can keep attacking with no break in momentum.

Because of Jackson's play, the Thunder bench had one of its better games, scoring 39 points on the night. While outplaying the Lakers bench is no cause for victory dances, it is still a great accomplishment for an OKC 2nd unit that is still trying to find what it does best on the court. Scott Brooks had to know that he'd have a bench advantage, and he let his players do their job in outplaying the Lakers' 2nd unit and this performance went a long way to sealing the win.

As we predicted over the summertime when the Lakers were making their offseason acquisitions, even the addition of Steve Nash and Dwight Howard did not address the fundamental issue of why OKC is clearly superior over LA. The key is Russell Westbrook. Kevin Durant does not need to play great or even good (tonight he was mediocre offensively) in order for OKC to win. He essentially just needs to offset whatever Kobe Bryant does. Rather, the reason why the Lakers cannot compete with the Thunder is because they still do not have a single player on their roster who can do anything to stop Westbrook.

What is remarkable is that the Thunder did not even have what you'd consider a 'great' offensive game, yet they scored 122 points with little trouble. Granted, the Lakers are nowhere near what people anticipated over the summertime, but they had been surging as of late, finishing games with much better results. For OKC to score that many points with so little difficulty shooting under 50% is a great sign of OKC's offensive machine.

The Thunder, no strangers to the careless turnover, turned in a remarkable effort by only losing the ball twice the entire game. We know that OKC struggles with the turnover, committing a near league-worst 15.8 per game, so 2 TO's is something to celebrate.

In context, the low turnover number is not a revelation, however. The Lakers struggle to put pressure on the perimeter, and by failing to do anything really against an opposing team's passing lanes, it is not surprising that they struggle in getting the opposition to give up the ball. That said, what OKC's 2 TO's tells us is that they did not lapse in their concentration in handling the ball, used the Lakers' defensive weakness against them, and continuously found seams in the driving lanes in order to both get the ball to the rim as well as look for spot-up shooters. The drives and spacing were so good that even maligned Derek Fisher found himself open for corner-3's, which are the first made baskets of Fisher's current season in OKC.

It is a good thing too that the Thunder have figured out a repeatable solution to beating the Laker defense, because once again Durant's shot was off. While we saw some of his late-game shooting struggles pop up again, I am thinking that this has more to do with just a bad stretch of shooting than anything else. Durant was getting into open spots on the court with ease from 18 feet on in, and he was simply missing wide-open shots. He was missing the kinds of shots that we watch and shout, "Lay-up!" when he fires them at the rim. For some reason however, they are rattling out these days, but given that he's looking for good shots, the trend is sure to reverse soon. To Durant's credit, he did not allow the sub-par shooting to derail his effort. Durant corralled 8 defensive boards, keeping Howard off the offensive glass, and protected the rim with 3 blocked shots.

The Thunder completed a Los Angeles double-header and have looked very good over these past two games. They are still not out of the woods yet, as their 4th quarter offense is still shaky, in part because Durant has been struggling with his shot. However, what WAS promising was the way the Thunder defense closed out the Lakers.

After LA closed the lead to 5 points with over 6 minutes to play, we began to hold our collective breaths. OKC had outplayed the Lakers thoroughly throughout, but were their 4th quarter struggles going to cost them a sure win? Fortunately, the Thunder defense stepped up and ended the game on a 12-0 run that was punctuated by a Westbrook steal off of Kobe Bryant, and he raced down to seal the win with a 2-handed slam.

New York is up next, a worthy challenge. The Heat just beat the Knicks on Sunday afternoon, so the Thunder will look to see if they can continue to measure up to the pace which Miami is setting.

A final word from Walter Sobchak: 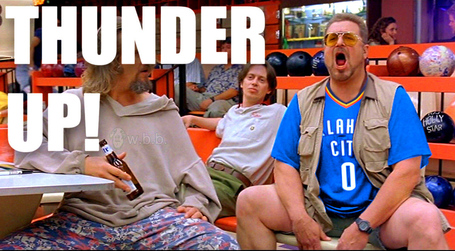 Next game: @ the New York Knicks on Thursday, March 7th at 7PM CDT