How to Use Derek Fisher Properly

You know, I could write a long column explaining why Derek Fisher is hurting the Thunder with nearly every minute he remains on the floor. But I did it before it was cool.

Share All sharing options for: How to Use Derek Fisher Properly

You know, I could write a long column explaining why Derek Fisher is hurting the Thunder with nearly every minute he remains on the floor. But I did it before it was cool, and even the most positive of Thunder news outlets are starting to admit that the advantages of Derek Fisher are not paying large dividends. So, yes, it's obvious that Derek Fisher shouldn't be playing. I'd give a whole lot to see pretty much anyone on the roster not named Thabeet or Orton take his spot in the rotation.

Sadly, Derek Fisher is going to play. No matter how many catastrophic performances he has, I'm pretty sure Scott Brooks is dead set on giving him minutes. Even worse, Brooks is also dead set on keeping Derek Fisher at shooting guard, right next to the also defensively inept Kevin Martin. What Scott Brooks said in response to a question from Royce Young pretty much explains it all.

Young: "He’s played pretty much only at shooting guard, so outside of intangible things like leadership and toughness, what do you like about him at that position over younger guys like Liggins and Lamb?"

Brooks: "Experience. You can’t get that unless you have it. It’s not something you get going to the store."

On that note, I've decided to put together a nice "how to" guide regarding success with Derek Fisher. This 38 year old is along for the ride, and there's got to be some way to make him work. I focused on the offensive side of his game, because the Thunder do a good job of covering his defensive weaknesses over half of the time, and there's not much I can say other than "he needs quicker feet".

The most apparent problem with Derek Fisher is his atrocious shooting percentages. He's missed the last 14 shots he's taken, and is shooting 34.8% from the field and 32.0% from three. His shooting percentage was similarly low when he played for us last year, and when playing for Dallas earlier this year. But in his last full season with the Lakers (2010-2011), he was able to shoot 38.9% from the field and almost 40% from three. His physical skills can't have changed that much in two years, so what gives?

To answer this question, I decided to look at his shot distribution. Below you'll find a chart, courtesy of Vorped.com. (Click on the image for a larger size.)

Taking this information to account, two things are apparent. For one, Derek Fisher is really favoring one side of the floor, especially while on the Thunder. For two, during this season, he's moved away from his jumper on the wing. Instead, he's gone to the baseline and three point wing shots. Obviously, the sample size for the later two seasons is limited, so anything I say is a hypothesis. But it seems to me that while moved to the shooting guard spot, his offense has become a lot more one-dimensional, and his shooting percentages have suffered as a result.

To further this study, let's consult the 'ol MySynergySports.com database and figure out what types of shots Derek Fisher has shot over the past three seasons. (Again, click on the image for a larger size. Also, keep in mind that the percentage of time given doesn't necessarily reflect shots taken.) 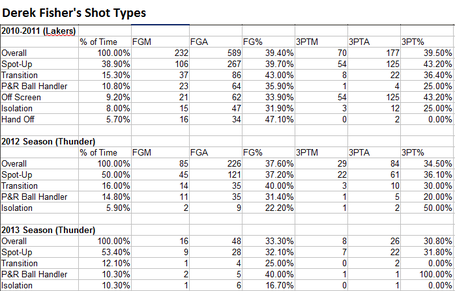 What does this tell us? Well, even when Derek Fisher was playing for the Thunder as a point guard, he definitely went under a huge transition. Basically, he went from being primarily a spot up shooter to being almost totally a spot up shooter. Very occasionally he'll dribble around a screen or isolate, but these days he primarily shoots while standing still.

Basically, the total change in his play style has forced him to give up a few shots that drove his game in the past. In some cases, this might be a good thing, because he wasn't exactly lighting the world on fire with his off-screen or isolation shots. But it's also taken the ball out of his hands, forcing him away from certain spots on the floor. (You can see this reflected in the shot distribution charts above.) As a result, his overall percentages may have suffered, and his overall value might have diminished.

Before I continue, I totally understand that Fisher's lower percentages may be a result of a small sample size. Sometimes, guys just hit rough patches when it comes to their shot. For example, Sefolosha's three point percentage was off the charts earlier this year before cooling down. But the predictability of Fisher's shots has led to him throwing up more difficult attempts.

But Fisher's game lies beyond the numbers, and the Xs and 0s. Sometimes you've got to review what you see from actual game footage and determine what's really going on. Combining the charts and tables above with footages from actual games, I was able to come up with the following solutions to fixing Derek Fisher's shooting woes.

Make sure he receives the ball at chest level. When someone can toss him the ball from a shorter distance and he gets the ball right where he needs it, his percentages are off the charts. When he jumps or runs for a cross-court heave, he might be technically "open". But he has to rush the shot and he's out of rhythm, so he doesn't do nearly as well.

Run plays for him. After looking at all of his shot attempts this season, it's apparent that there are 0 plays drawn up for him in the playbook. Part of Fishers difficulty is that he's looked to as a last resort. He almost never receives the ball early in the shot clock, and when he does, it's usually just him bailing out another player or getting in on some perimeter rotation. If he was actually given some direction in where to be on the floor and some hope that he might receive the ball in a good position, he would probably be making more shots.

Never have him try to work a play in the corner. While standing in the corner, he'll often have to run or jump for cross-court heaves, forcing him out of rhythm and giving his defender time to recover. If he can't shoot immediately, he should pass it. When he doesn't shoot it, he does one of two things. Option 1 is him sitting on the line for a while and unsuccessfully trying to fake out his defender. He usually jacks it up anyway. Option 2 is a quick fake that sends the defender flying, followed by an ill-advised drive where he gets stopped 10 feet short of the basket and badly fails a teardrop layup.

Let him sneak into the mid-range wings. By looking at footage from his Lakers days, you can see that he's really comfortable with the mid-range jumper. He can bank it from 12-15 feet out, and he can shoot well off the dribble. If you could have him hang out behind the three point line or run a couple of picks for him in the mid-range area, you'd be surprised how well he can make lemonade out of lemons in that area.

I'd like to close this article by saying that there's no golden ticket to fixing a player's offensive problems. Basketball is a multi-faceted game, and no matter what the coach says, players have to make plays. But what I've seen out of Derek Fisher has been a stunning lack of direction mixed in with some bad judgement. Fisher was never known for having the best court vision or ability to judge a shot, but he should really naturally play more to his strengths.

And on Scott Brooks' part, he should really start seeing Derek Fisher as a "second PG" rather than a "corner three shooter". When not working off of the corner, Fisher can do some pretty good things with the ball, and shoots well off the dribble, if he's not totally covered. In any case, he's better than Kevin Martin, who should be getting feeds from Fisher or Jackson. Instead, K-Mart is given the ball at the three point line and told to isolate against his defender, which is pretty clearly not his game. It's almost like in terms of where and how they get the ball, Fisher and Martin's roles are the reverse of where they should be. No, I'm not saying that Derek Fisher should isolate at the top of the key and jack up shots. What I am saying is that Derek Fisher should take a more active role in moving the ball, and have some easy scoring plays set up for him. Let Kevin Martin take the tough shots while the bench is on the floor.

All in all, I know that Derek Fisher isn't the ideal backup two guard. I know that there's probably better options sitting on our roster right now. But, experience isn't something you get going to the store. Unfortunately, experience means nothing if it's not applied properly.

Have any Derek Fisher solutions of your own? Am I totally crazy! Let us know in the comments!

Derek Fisher is back