The Thunder went 2-2 this past week. How did it happen? What did we learn? What does it mean going forward?

(Today we introduce you to a new column which we hope will become a regular weekly feature. A lot happens during the week. In this space we will be recounting what happened, why it matters, and what it means going forward)

After 70 games, the Thunder find themselves 2nd in the Western Conference, 2 ½ games behind the San Antonio Spurs and 3 games ahead of a Denver team that has now won 14 straight and have leapfrogged both Memphis and the Clippers into the 3rd playoff spot. The Clippers are 4th and Memphis rests at No. 5. The Golden State Warriors, Houston Rockets, and Lakers round off the top 8 teams, respectively.

Here are the standings as of March 23:

Of course, it's far from over. There's still a lot of basketball to be played. One loss or win can send a team either way, up or down the rankings.

The Thunder started the week in the American Airline Center in Dallas, looking for their 50th win against a much-improved Mavericks team. Dirk is healthy now and playing well. It would be their fourth and final meeting this season, and it would end up being a close, hard-fought, defensive battle with the Thunder pulling away late in the 4th quarter, sweeping the Mavs in the regular season. The final score: Thunder 107, Mavs 101.

Tuesday brought the Denver Nuggets and their 12-game winning streak to Oklahoma City's Chesapeake Energy Arena. It would be a game controlled by the Nuggets: 72 points in the paint, 17 offensive rebounds, and playing at a tempo that most suited them. Durant and Westbrook both shot under 50% and the Thunder's defense struggled to find any footing against the Nuggets relentless drives to the basket. The final score: Nuggets 114, Thunder 104.

The next day, OKC flew into Memphis to take on the Grizzlies in a game that would provide the Thunder with more questions than answers. OKC got off to a slow start and trailed most of the game until Kevin Durant found some rhythm in the 3rd quarter, scoring 17 straight points and propelling the Thunder past the Grizzlies by 1 point. Both teams seem to sputter and start in the fourth quarter. The lead would change hands several times, but with 1:26 to go in the game, the Thunder had taken a 6-point lead with the possession of the ball.

And then, OKC began a series of mistakes. An offensive foul would give the ball back to the Grizzlies. A missed foul shot by the Thunder left the door open for the tie by the Grizzlies. With seconds to go in the game and leading by 3 points, Coach Brooks decided to play the ticks on the clock and not intentionally foul on the inbound pass to send Memphis to the line to shoot 2. What happened? On a clever perimeter play by Memphis, Jerryd Bayless sank a 3 pointer, sending the game into overtime. In overtime, with seconds to go, Russell Westbrook drove to the basket and rolled in a difficult shot that put the Thunder ahead by 1 point, needing only one final stop to get out of Memphis with a win. Unfortunately Marc Gasol would be the hero that night, tipping in a missed shot by Zach Randolph. Memphis wins it: 89-90.

With the two losses behind them, the Thunder looked toward Friday's game against the Orlando Magic as an opportunity to get back into the win column. During a pregame interview, Durant announced that Friday night's game against the Magic was a "must win." With the Spurs distancing themselves from the pack and Denver creeping up from behind, I definitely agreed with Durant's statement.

As it turned out, the Thunder squeezed by Orlando, securing their 51st win. Orlando, a young team, kept pace with the Thunder in what seemed at time as a low-energy, sluggish game. The Magic were without a starter, Nikola Vucevic and lost Arron Afflalo during the game with a hamstring injury. To everyone's surprise, the game was tied late in the 4th quarter at 86 points, but to no one's surprise, it was a 3-point shot by KD that provided some separation for the Thunder who went on to win the game. Thunder wins it barely: 97-89.

What have we learned about the Thunder this week?

The Thunder has the ability to grind out a tough game against a tough opponent, scoring points in the paint and creating clutch points down the stretch. They can also compete with a fast-paced team who gets out and runs in transition. But who are they really? Most times, the Thunder looks like a team in search of an identity. Are they a physical team who leads the league in technical fouls? Are they a team committed to ball movement? Or are they best playing one-on-one isolation by their hard-to-defend superstars, Durant and Westbrook? Is it internal consistency the Thunder seek or is it the ability to make the appropriate adjustments to the opposing team?

Coach Brooks has enjoyed the regularity of his starting 5, but the bench has been a different can of worms. The bench lacks productive consistency and has been subject of much criticism. Bench productivity is a sore thumb for OKC and at times proves to be both an offensive and defensive liability. Brooks has mixed and matched several different reserve players, looking for pieces that fit well together and can provide a much-needed spark that will impact the game positively. The Thunder coach seems to have confidence in only a handful of guys: Nick Collison, Kevin Martin, Reggie Jackson, and Derek Fisher. To counter this, Scott Brooks mix in starters, but the question still looms: Can the Thunder win a championship without reliable scoring by the bench?

Do we know who the Thunder's leader is? Who is that calming voice on the floor, on the sideline, in the locker room? General Manager Sam Presti brought Derek Fisher back onto the team to play a leadership role. When asked, "why Derek Fisher?" Coach Brooks' first response was to point out Fisher's leadership skills. Kevin Durant, at times, is very vocal on the floor, demanding the ball and calling out teammates for lacked of focus. Russell Westbrook sometimes gathers the team together on the floor to offer comments. The team is close, we know that, but who will be that reassuring presence on the floor when the opposing crowd is roaring and the lead has just slipped away?

With only 12 games to go to post season, the Thunder has time to figure out all of these issues, but will they? 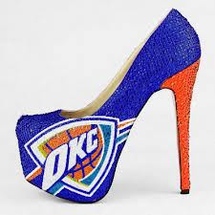 Hello, I'm Ramona and this is my first column at WTLC. I'm an Oklahoma native who has been following the Thunder avidly since they came to town 5 years ago, but prior to that had been following the NBA for years, though I'd never been obsessed with any other team the way I am with Big Blue. I come from a long line of sports fanatics in my family and I am excited to be using my writing talents to help build the WTLC community.