Thunder final score: Russell Westbrook leads OKC to a win over the Mavericks, 107-101

Russell Westbrook led the way while Kevin Durant finished off the Mavericks in Dallas, sweeping the season series.

Share All sharing options for: Thunder final score: Russell Westbrook leads OKC to a win over the Mavericks, 107-101

The Oklahoma City Thunder defeated the Dallas Mavericks on the road, 107-101. In what has become practically a ritual of closely contested affairs, the Thunder closed out the game on a 6-0 run while holding Dallas without a field goal in the final 2:54. The win marks the Thunder's sweep of the Mavericks in the regular season, and makes the Mavs' chances at catching the 8th seed all the more difficult as they are now 3 1/2 games out of the final spot.

The Thunder were led by Russell Westbrook, who was the workhorse for the majority of the evening. With the Thunder struggling to generate consistent offense, Westbrook finished with 35 points off of 12-23 shooting to go along with 6 rebounds, 6 assists, 2 steals, and a block. On top of that Westbrook hit the go-ahead jumper with a minute to go that gave OKC a lead they would not relinquish.

Westbrook was aided by Kevin Durant, who reversed a lackluster performance through 3 quarters to turn in a dominant stretch in the 4th. Finishing with 31 points and 9 rebounds, Durant had 19 of the team's 34 4th quarter points.

Dallas was led by Dirk Nowizki, who finished with 23 points and 7 rebounds. Nowizki was aided off the bench by Vince Carter, who scored 18, including 3-5 from 3-point range.

There are few standby rules in the NBA, but one of them is that Dallas is always going to play the Thunder tough on any court, and tonight was no exception. In fact, I kind of hate watching these two teams play because of the Mavericks' remarkable ability to persevere against the more athletic Thunder. Even though OKC feature two of the best scorers on the court, the Mavericks continued to figure out a way to maximize their possessions and challenge Durant into a difficult night.

Once again, Durant looked out of sorts for most of the game. His 19 4th quarter points were a huge factor in OKC winning, but through 3 quarters Durant had only 12 points and was as passive as we've seen him lately. On top of that, Durant once again had a high turnover game, losing 6 on the night (against only a single assist). It is difficult to be too critical of Durant since he came up so big in the 4th, but as the best player on the court he really needs to be a bigger threat on offense than he has been, especially since one of the top Durant defenders in the league, Shawn Marion, was sidelined with injury. Scott Brooks might do well to simplify Durant's game a bit, take some of the playmaking load off him, and let other guys set him up for scoring opportunities.

Fortunately for OKC, Westbrook once again came to play and carried the load through most of the game. He knows that he can get the shots he likes, and Westbrook's drives to the rim and his mid-range jumper were the primary reason why the game was so tight entering the 4th. Furthermore, Westbrook hit the huge go-ahead jumper with a minute to play, which is further evidence that Westbrook is becoming more and more comfortable taking game-deciding shots. To be sure Westbrook is never going to be shy about shooting, but this season has been a breakout of sorts because of Westbrook's ability to finish better with the game on the line.

At some point in OKC-Dallas games, the Thunder need to reach the realization that they aren't going to just run away with things and they need to maximize possessions. This finally happened in the 4th when the team made a much more concerted effort to get Durant the ball in good scoring opportunities while turning the ball over only once in the 4th.

Although things got a bit tight at the end with Westbrook committing some careless fouls on Dirk, which led to Dirk's tying the game at the free throw line, the Thunder did not lose their composure as we have seen earlier this year. After Westbrook hit his jumper and the defense forced a 24 second shot clock violation through some great hustle play, the Thunder needed one more score to lock in the win.

Who to turn to? Give it to Durant with his hot hand? Go with Westbrook once more?

You know what time it was, right? That's right. it was Thabo Time. 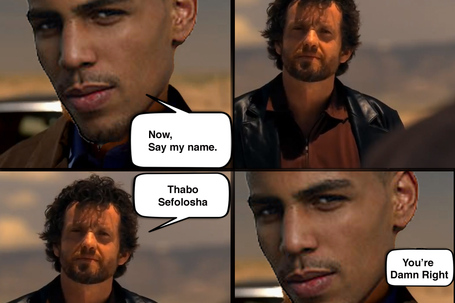 Sefolosha kept the ball with the shot clock winding down, steadily worked his way into a good offensive spot, and then calmly knocked down the fadeaway baseline jumper. In my mind, this play is indicative of the fact that Thabo is now an important offensive player. Two years ago, with Thabo on the court, opposing teams played OKC's offense as if they were playing 4-on-5 (and 3-on-5 if Kendrick Perkins was out there too). Now though, defenses must respect what Sefolosha is bringing to the floor. Tonight, Thabo brought a game-clinching bucket.

In such a close game it is difficult to hone in on any one statistic, but in brief, here are some spots where OKC outworked Dallas:

This is another important grind-it-out win for the Thunder. As they say, winning covers all ills, and there were plenty of them tonight, from the combined 11 turnovers between Durant and Westbrook, to the haphazard offensive flow, to their failure to hold a lead in the 4th until the very end.

The glass half-full perspective though is that the Thunder figured out a way to win a game where they were not playing great offensive ball and overcame Durant's struggles to stay competitive. Furthermore, the Thunder relied on great defensive effort in the final few minutes of the game, which made it impossible for Dallas to get clean looks at the rim and challenge the Thunder for the win.

Hold onto your hats though, because on Tuesday the Thunder invite the Nuggets into the 'Peake, and that game will be a racetrack affair compared to this one. The one constant remains though - the Thunder must know how to win both types if they are to chase the crown.

Next game: vs the Denver Nuggets on Tuesday, March 19th at 7PM CDT

As you might know, this week is multiple sclerosis week, which is designed to raise awareness for funding, research, and treatment of the disease. In support of MS week, we've "oranged out" our pre and post game images. If you're interested to learn more, check out the website of the National Multiple Sclerosis society.