The Thunder worked out their aggression in the 1st half, dominating the game on the defensive end and all but ending things by halftime.

The Oklahoma City Thunder defeated the Utah Jazz, 110-87. In a game that could serve as a potential 1st round playoff preview, the Thunder used a dominant stretch in the 1st half to put the game out of reach. The Thunder currently trail the West-leading Spurs by one game, while the Jazz trail the Lakers for the 8th spot by 1/2 game.

Despite the lopsided score, this was a chippy game to watch, where neither team could find much offensive rhythm and players began to get testy as the game went on. The Thunder were led by Kevin Durant, who finished with 23 points and 10 rebounds, but once again committed an uncharacteristic 8 turnovers, 6 of which were in the first half alone. Durant's struggles were mitigated by Russell Westbrook, who had a strong bounce-back game, scoring 19 points on 6-11 shooting, including 7 rebounds and 9 assists.

The Jazz were led by Gordon Hayward, who scored 20 points but shot only 6-14 from the field. Conversely, no Jazz starter scored in double figures and combined for a mere 26 points.

This was a brutal game to watch. I am glad that a) the Thunder got the win; and b) showed much more defensive intensity than against the Spurs, but even so, this one was a bit of an eyesore.

It was great to see the Thunder come out of the blocks with some Tenacious D (this is just a tribute) and hold the Jazz to only 19 points in the first quarter, which included an Alex Burks desperation 3-pointer heave at the buzzer. However, OKC was just getting warmed up. Playing both smart and aggressively in the 2nd quarter, the Thunder held the Jazz to only 9 points off of 3-24 shooting. Combined with the 1st quarter output, that meant that the Jazz had 28 points in the 1st half, leading to a 22 point lead at the break.

By midway through the 3rd quarter, the Jazz had only managed another 9 points, leading to a 32 point deficit. At that point, the goal of the game was to get it over as quickly as possible without injury or ejection.

That said, the Thunder offense was no picnic. The team committed a combined 25 turnovers, 13 of which came from Westbrook and Durant. Along with the sloppiness, the game could have gotten ugly. A combined 5 technicals were called as well as a flagrant-1 foul on each team.

The Thunder used great defense in the 1st half to put the Jazz on their heels and were aided by Utah's terrible shooting on the night. After Monday night's loss that saw the Thunder repeatedly lost on defense, it was great to see the entire team extremely focused on the defensive end of the court. Aside from a number of offensive rebounds that the Jazz were able to corral, Utah got very few clean looks in the half. Even their bigs Al Jefferson and Paul Millsap struggled to get open looks inside the paint, instead both had to work just to get looks on the perimeter.

Here is the Jazz's shot distribution. It's not pretty: 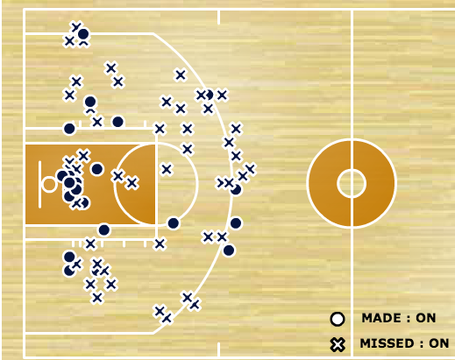 Aside from the Thunder's defense, they were fortunately able to come some uncharacteristic Kevin Durant offense in the first half. We've been speculating for the past week/month as to what is going on with Durant. Is he tired? Is he just going through a bad stretch? Is the 50-40-90 chase getting to him? Perhaps all of those pressures culminated in a 1st half where Durant turned the ball over 6 times (8 in the game), many of which were unforced. Durant was completely out of sorts and at one point after he headed to the bench, the camera caught him holding his head in his hands, a towel covering his no-doubt frustrated visage. Sometimes games go like that; it happens to everyone.

What makes players like Durant great however is their ability to bounce back. After perhaps one of the worst halves he has ever played, Durant responded by scoring 15 points in the 3rd quarter, turning a 20 point lead into a 30 point lead, meaning the rest of the game was going to be another one where the Thunder starters got to rest for the entirety of the 4th.

Aside from the woeful Jazz shooting, the Thunder did not have a ton of bright spots worth highlighting, but here are a few.

Defense, defense, defense. What makes games like tonight both rewarding as well as frustrating is the knowledge that OKC can play defense like this when it wants to. It is a good thing for a team trying to work out its emotions apply it to the defensive end rather than the offensive end. When a team is overzealous offensively, it can lead to bad shot selection, turnovers, and bad flow. However, when the aggression is channeled defensively, there is an almost primal sense of the hunt, where a team smells the chum in the water and begins to take satisfaction in disallowing any easy shot from approaching the rim. We see this tenacity in teams like the Grizzlies, Heat, and Celtics, and they can use it to overcome other offensive lapses. The Thunder can do the same.

Next up is the struggling Magic, who just had their hearts broken twice by watching Dwight Howard return to Orlando for the first time since the summer trade and decimate his former team. A good defensive start against a struggling team is always a promising formula. Durant will regain his touch. Westbrook will remain intense. The bench will find its groove. Fisher...will be Fisher. Defense though, that's better than diamonds. Let's see it again.

Thunder Blunder: Kevin Durant, who had 8 turnovers in the game

Next game: vs the Orlando Magic on Friday, March 15th at 7PM CDT