Kirk Goldsberry: Durant one of the best, getting better

Harvard professor and spacial reasoning expert Kirk Goldsberry gives Kevin Durant the treatment to show how far he has come in his NBA career.

Share All sharing options for: Kirk Goldsberry: Durant one of the best, getting better

Kevin Durant has grown exponentially as a player in his six NBA seasons. We know this. He is now a peerless offensive savant who produces points more easily and efficiently than anyone else. We know this as well. What Harvard professor and Grantland contributor Kirk Goldsberry wants us to know is how Durant is accomplishing his growth on the offensive end of the court. Goldsberry is an expert in spacial reasoning and visualizing geographic information, and as we've seen him do in the past, he condenses and reduces Durant's mastery into easily digestible charts.

I encourage you to read the entire article to get a complete understanding of what Goldsberry is displaying, but I wanted to snag two of his charts that really show Durant's growth: 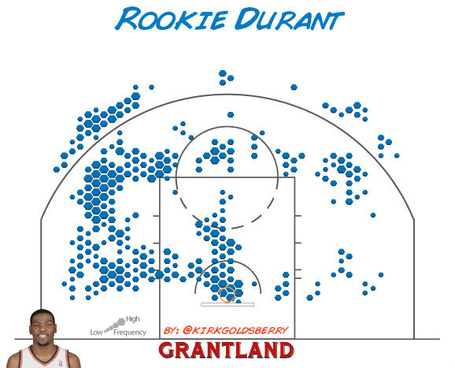 Keep in mind that when Durant was a rookie, his team was pretty bad and as the new 'star' for a bad team albeit one who was still unprepared for the rigors of NBA shot-making, Durant was hoisting up shots any way he could get them. It is commonly accepted these days that the two best shots in the game are at the rim and in the corner for 3-pointers. As you can see, Durant took those shots infrequently in exchange for the worst shot in basketball, the long 2-pointer.

Compare that now to the shot distribution he is putting up this year. 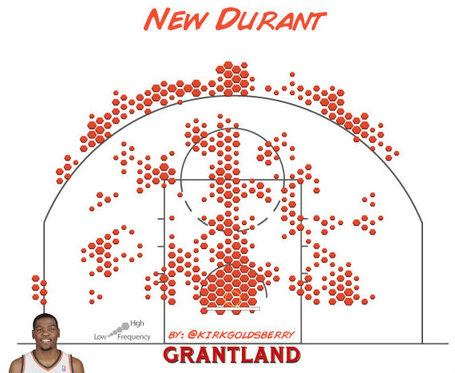 The interpretation is stark, and as Goldberry notes, it is not by accident:

This season, Durant is scoring more effectively in the "NBA Jam" zones — at the rim and beyond the arc — while taking fewer midrange shots. From this spatial perspective, in 2010-11 Durant was a 23/50/27 guy — meaning 23 percent of his shots were close-range shots, 50 percent were midrange shots, and 27 percent were 3-point shots. This season he's a 34/41/25 player. He's given up good shots in favor of great ones.

Which shots are the great ones for Durant? As you can see above, it is the ones that are dead-on, both at the rim and at the top of the key out beyond the arc. Imagine that - the most makable shots for the game's best shot maker are the ones where he is looking straight-on at the rim. Better yet, Durant knows it too. (As a point of comparison, these are the shots that Russell Westbrook was taking more and more last year too, and his shooting percentages shot up as well. )

What I love most about Goldsberry's analysis though is this little bit of honesty:

Durant continued his dribble as he approached the top of the arc. In a single smooth motion that was equal parts nonchalant and cold-blooded, he crossed the ball through his legs to his left hand, stuttered his feet, and rose up from the top of the arc to win the game.

Isn't that great? As much as Goldsberry loves the science behind it all, at the end of the day he also simply loves the game and loves watching Durant play and recognizes the greatness both in the math and in the poetry of it all.

All images via Kirk Goldsberry.