Time to look back at some of my favorite moments from the 2013 NBA All-Star Weekend .

I figured this week seemed like a perfect time to go a little off script on the weekly awards. The Thunder have only played one game since last week's awards and they do not play again until Wednesday evening. So doing the awards for a week seemed pretty pointless. Plus who really wants to relive the game vs. the Miami Heat.

I am one of the people that loves NBA All-Star weekend. Out of all the major sports it is my favorite All-Star event hands down. I was able to cover the All-Star game in Los Angeles in 2011 and it was hands down the highlight of my professional career. So much access to the players and the NBA understands how important fan involvement is for these events.

All of that being said I decided to give you some of my favorite moments for the weekend that was in Houston.

It really could not have gone better for CP3 this past weekend. He took home a trophy as captain for the West squad in the Saturday night skills competition and added more hardware on Sunday taking home All-Star game MVP. Not a bad weekend for a guy who two years ago played on a team that was seldom seen on National TV.

Nothing says you had a bad weekend like an air ball in the All-Star game and getting a nutmeg pulled on him not once but TWICE!

I have been saying it for a while now. Kyrie Irving is an absolute stud and is the next big superstar in the NBA. He used the All-Star weekend this year to put the entire NBA and the world on notice. He stole the show in the Rising Stars game on Friday night, won the three point contest on Saturday night, then got the start in the second half of the All-Star game on Sunday night.

Oh remember when I said he stole the show in the Rising Stars game. Part of stealing the show was ending Brandon Knight with a ridiculous crossover.

I completely agree with Terrence Ross winning the dunk contest. As a whole his dunks were better than Jeremy Evans. But man I really enjoyed Evans' dunk over the painting of him doing the exact same dunk. It was very clever and original.

I Did Not Know He Could Do That Award - Alexey Shved, Minnesota T-Wolves

Seriously who knew he could do this?

And now the award that everyone has been waiting for...

This was the toughest award to hand out. Mainly because every outfit Westbrook broke out this weekend were all amazing in there own way. But the winner for best outfit by RW goes to... 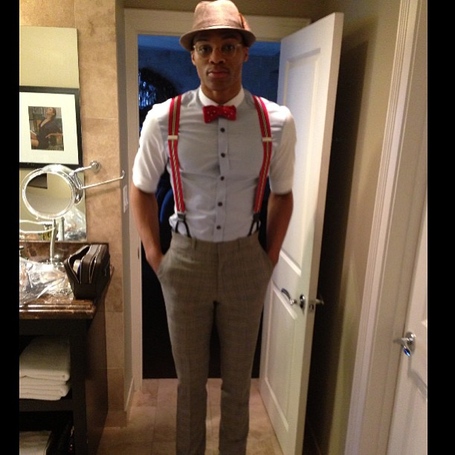 There are so many things that make this outfit awesome. First being the hat and the bow tie then when you throw in the suspenders to complete this look. Westbrook looks like a cross between Brother Mouzone and the member of the band Fun. I am glad Mr. Westbrook did not disappoint with his wardrobe this All-Star weekend.