Russell Westbrook has a word with Legend Bill Russell

Share All sharing options for: Russell Westbrook has a word with Legend Bill Russell

Russell Westbrook had a chance to share a moment with Celtic legend Bill Russell before tonight's All-Star game. Westbrook is playing in his 3rd All-Star game, and Russell, well, he doesn't really need much context, but if you want some anyway, here you go. Suffice to say Mr. Russell is one of the most important athletes in American history.

Anyway, there are a hundred things that I can think of that I would hope that they would talk about, but mostly this image conveys one thing to me. Mr. Russell, gently holding Westbrook's arm and looking him in the eye, just wants Westbrook to listen to what he has to say.

Maybe it was something profound, maybe it was simply, "I hope you have a good game." For me though, there has to be some comfort and encouragement knowing that Russell cares enough to want to say something to a kid who desperately wants to leave his mark too. 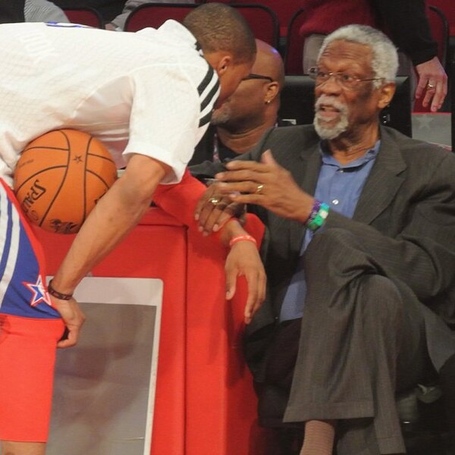