In last Friday's Suns matchup, Goran Dragic was able to score 13 of his team's 15 points rather effortlessly. This event led to an early entrance for Reggie Jackson, who was able to hold Dragic to two points for the rest of the quarter.

Last Friday's Suns-Thunder game was rather unremarkable for the most part. The Suns were able to stay with the Thunder through a half thanks to some creative offense, ability to get into the paint, and two scorers that they could rely on. But they eventually hit a huge dry spell in the third and had nothing to keep their offense anchored, so they fell rather easily.

There was one anomaly, however. Between 10:05 and 5:52 to go in the first, Goran Dragic was able to score 13 of his team's 15 points rather effortlessly. This event led to an early entrance for Reggie Jackson, who was able to hold Dragic to two points for the rest of the quarter.

How did this offensive spurt manifest itself? Well, let's take a look.

This play started off as a failed pick and roll on the opposite side for Jared Dudley. Dudley refused the play, leaving Gortat at the top of the key. He passed it to a streaking Dragic, who was attempting to go drive down the center of the lane. Gortat threw the pass too high, and Dragic had to reset. 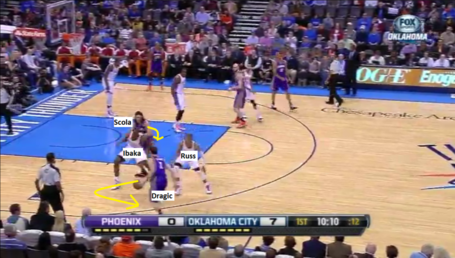 Here, you can see the result. Dragic is trapped on one side of the court by Russell Westbrook and Serge Ibaka. Keep in mind that the Thunder had gotten two steals and a block on their three previous defensive possessions, so it makes sense that they would try to grab another steal. Here, Dragic is going to fake left, throwing both Ibaka and Westbrook out of position. In the meantime, Scola is going to set a screen for them both, so Dragic can get to the top of the key. 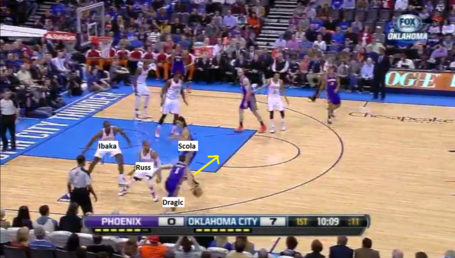 As you can see, because of Dragic's fake, both Ibaka and Westbrook are now out of position and will likely get blocked by Scola's screen. Sefolosha or Perkins could come to help out on the screen, but that would leave Gortat or Dudley wide open. Dragic now has a wide open path to the top of the key. 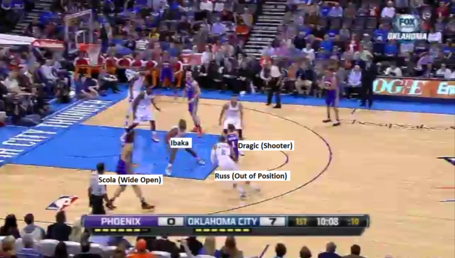 Now, the Thunder are stuck between a rock and a hard place. Westbrook is in no man's land, Dragic has good position on a slower defender, and Scola is wide open on the wing. Moreover, Sefolosha half-heartedly went to help, leaving Dudley open for an easy triple.

The Verdict: Bad defensive communication. You can't have two guys chase around one guy. I'd rather take a bad Ibaka/Dragic mismatch than some really bad trapping. Westbrook and Ibaka share equal blame, because Ibaka shouldn't be looking to trap the point guard, and because Westbrook went over Scola's screen rather than under it.

Here, a simple post isolation for Serge Ibaka goes awry. During a particularly physical back down of Luis Scola, he loses the handle and Scola taps the ball out into the open court. 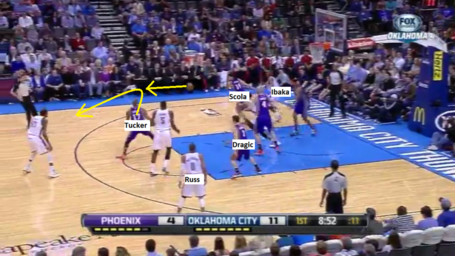 While the ball is getting tapped back, it's pretty clear that Scola and Tucker have the best position to get the ball. Yet even though he has the position to keep up with Dragic on the fast break, Westbrook stands there and watches the action on the other side of the court. 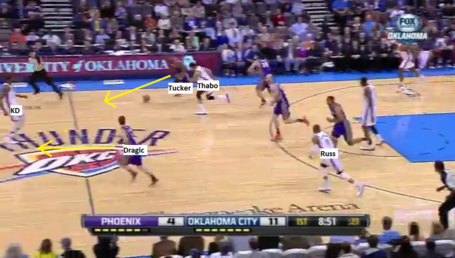 Lo and behold, the Suns have a 2 on 1. Westbrook reacted to the play way too late, and Dragic is about 12 feet ahead of him. Even though it appears Thabo is in lock-step with Tucker, Tucker is just far enough ahead to warrant KD keeping an eye on him. 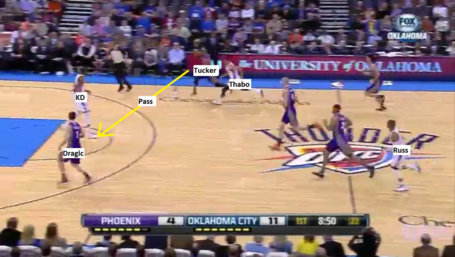 Unsurprisingly, Dragic is now wide open inside the arc. KD had to stay on Tucker to prevent a drive to the basket, and Dragic took advantage. The play would eventually end with Dragic quickly taking advantage of KD's footspeed for an open baseline jumper. Splash.

The Verdict: Westbrook's fault all the way. This is a perfect example of his absent-mindedness on offense. When Westbrook doesn't get the ball, he just doesn't seem to care about what happens. He stands on the perimeter, totally not focused on the action. Even when he does finally realize what's going on, he half-heartedly jogs to mid court. If he had been on-point and stayed with Dragic in the first place, this easy score would have never happened, and KD could have possibly forced a turnover on Dudley.

Play 3: Westbrook Gets Faked Out

This play is probably the simplest of them all. Westbrook gets faked out by Goran Dragic. 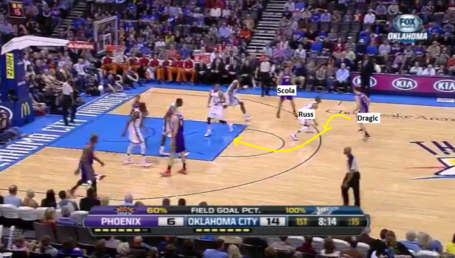 Here, Dragic is basically alone with Westbrook at the top of the key. Dragic makes as if he's going right, but with a little magic of the feet, he dashes left and has a clear path to the basket. 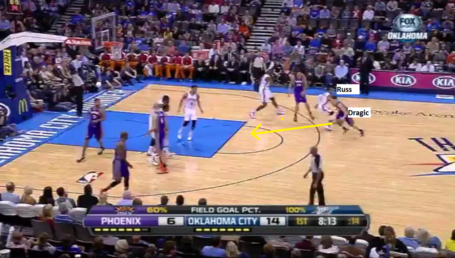 Looking at the above image, it's easy to see where Westbrook made another mental error. He was anticipating Scola's screen, and he attempted to go over it for no reason. If he had gone under the screen, he would have likely gotten back to Dragic in time. Even if Dragic would have taken Scola's screen, it's likely that Russ and Ibaka would have gone for pressure while Scola went unguarded the mid-range for an easy shot. 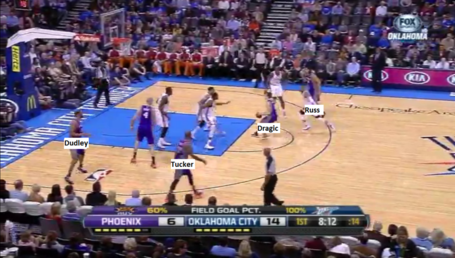 This final picture isn't to make you continue cringing. Notice that Westbrook's error hasn't only given Dragic an open shot at the top of the key. It's also given a wide open shot to Markieff Morris and P.J. Tucker, should Dragic decide to pass it.

The Verdict: Again, Westbrook is at fault. Going over a screen in this situation was definitely not the right thing to do.

This is another simple play that lead to an easy score. Sefolosha is forced into guarding Dragic, which leads to dire consequences. 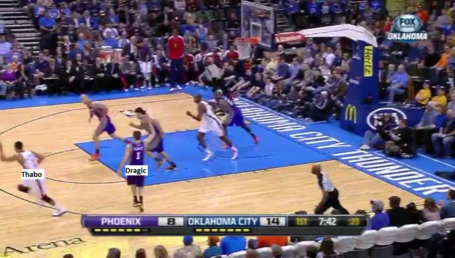 This play is the result of a missed Thabo three. The Thunder's defense is mostly in position, save for Ibaka, who was trying for the offensive rebound. The only Sun who's really out of the frame is Jared Dudley, KD's matchup. It's apparent that Thabo is trying to avoid the mismatch with Dragic and take back his man. Whether his point is acknowledging a prior pass from KD or identifying his man to Westbrook is unclear. 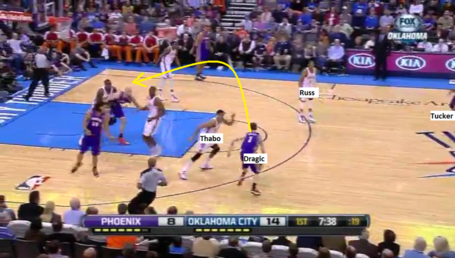 But, for some reason, the players don't end up switching back. Now, KD is guarding Dudley, Thabo is mismatched with Dragic, and Westbrook is guarding Tucker. The mismatches are a problem enough, but with Tucker lazily trotting out at the half-court line and providing no offensive threat whatsoever, it's Westbrook's job to go and help guard Dragic. 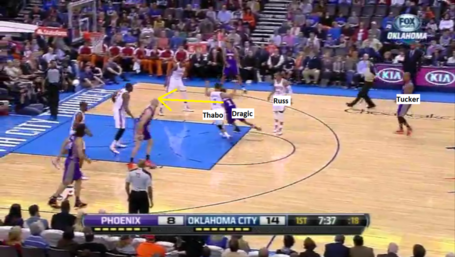 Instead, Westbrook provides no pressure and stands uselessly. Tucker is still a non-threat offensively, so Westbrook is stuck back in no man's line, guarding no one. Dragic runs around the slower Thabo for an easy layup.

The Verdict: Westbrook needs to provide the pressure. The other errors in this play are a little bit forgivable. With Thabo's matchup a non-threat offensively, it seems right for him to give a little bit of hassle to the ballhandler. He's also a bit slow when it comes to quickness, so I can forgive him for letting Dragic slip by. But Westbrook's errors were just mental. He guards a man that doesn't need to be guarded, and he doesn't help provide pressure while being in the greatest position to do so.

Play 5: Westbrook Goes Over a Screen....Again

I should preface this by saying that this shot by Dragic didn't go in. But I feel obligated to show it because he got a virtually open opportunity and the ball barely rattled out. If Dragic had better nerves, he could have easily had 15 points in 6 minutes. 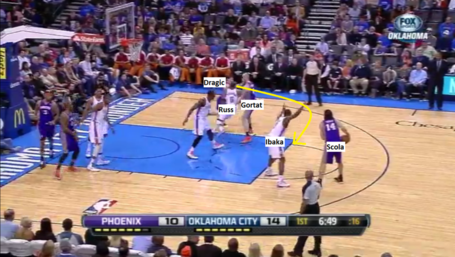 This play kicks off with Dragic dumping the ball off to Scola in the high post. While Scola buys time, Dragic runs to the low post and uses a off-ball screen from Gortat to get open. Again, Westbrook goes over the screen rather than under it. 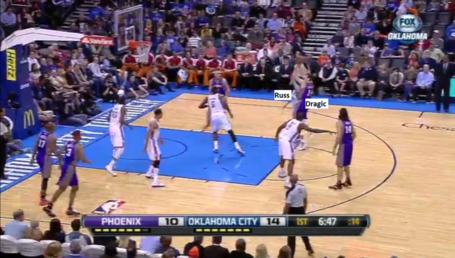 The result is another virtually uncontested Dragic jumper.

The Verdict: Westbrook is at fault. 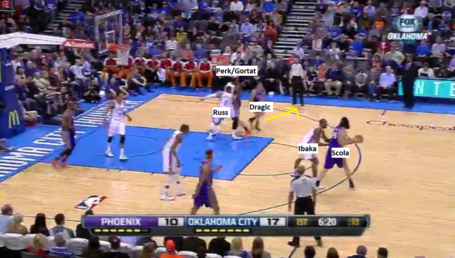 After the ball is dumped to Scola in the high post, Gortat sets the off-ball screen. This time, Westbrook runs under the screen, succesfully keeping Gortat from running in for easy points. Moreover, Ibaka keeps Scola further out on the perimeter, forcing him to make a more difficult pass. 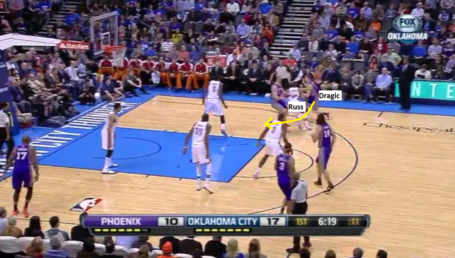 Crisis averted, right? WRONG. Dragic uses the same tactic that he did in play 3. He fakes right and then charges left. Russ overanticipates. 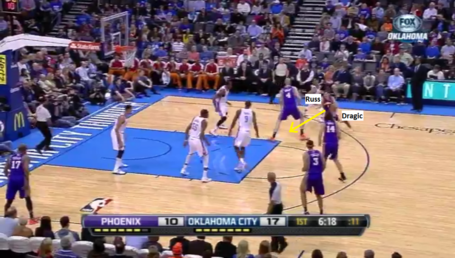 You can predict the rest. Dragic gets another easy jumper, it goes in.

The Verdict: Westbrook is at fault.

This play is the definition of how not to play defense. 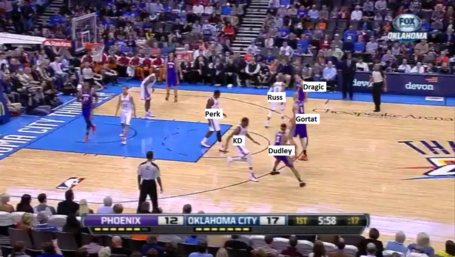 The play starts off innocently enough. Dragic dumps it off to Gortat, who dumps it off to Dudley for what could be an isolation against KD. The only problem with what you see is Westbrook. His feet are pointed toward the sideline, and his back is to the ballhandler. The power of where to go is completely in Dragic's hands. 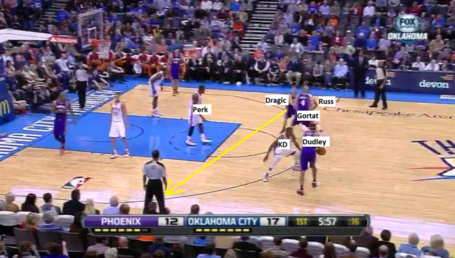 Dragic exploits this by basically running into Westbrook. Gortat helps by providing a screen. So, not only is Westbrook now facing the wrong direction, he's backpedaled into a guy that's twice his size. He now needs to do a complete 180 in order to get back to Dragic. 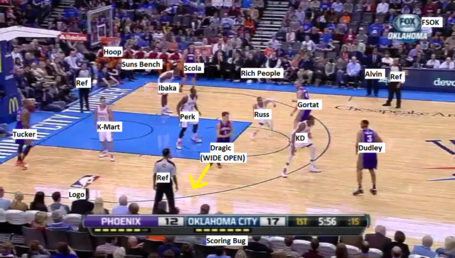 He doesn't get there in time, and Dragic scores an open three.

The Verdict: Guess who?

During Dragic's run, how many shots did Westbrook attempt? 0. That means Dragic basically had a 13 point advantage on Westbrook before he was subbed out. There's no excuse for defense that's this poor.

Look, I know Westbrook is human. He can't be on point every single play, and he can't keep up with every guard in the league. But he was partially or entirely at fault for every single one of these plays, and every time he committed a fundamental error. It's like Westbrook either doesn't care or goes for a steal, which isn't the way to play reliable D.

Yes, I know that the Thunder were up for the entirety of this run, and in the end, it was totally meaningless. But if Westbrook's defense was just a little more on point, and he didn't wait until the tail end of the second quarter to take his next shot, this game could have been over in the first.

My overarching point here is that Westbrook might as well have not been on the floor during this four minute stretch. He had a rebound that was tipped to him, and committed an offensive foul. He hardly handled the ball on offense. If you're not exerting yourself offensively or defensively, what are you doing?

I understand that sometimes guys get tired on defense when they're exerting themselves on offense. It's tough to give KD the defensive assignment on LeBron while he's in fourth quarter mode and carrying the team, because he just doesn't have the gas to be totally effective. But early in the first quarter while playing at home after a day's rest, this kind of play is just unacceptable.

The only reason I'm pointing this out is that this type of play is becoming a recurring theme in the play of the Thunder's perimeter players. Sure, they might get a few more steals, but they're letting so many free points go by that it's not even worth it. If you want more evidence, just go back and look at our losses in January and February. A lack of perimeter defense has played a huge role.

Anyway, the sky isn't falling. No one will remember this 4 minute spurt come playoff time. But if the West's worst team can cause this many problems with a pedestrian point guard, then what kind of havoc can the Heat wreak come Thursday?

What do you think? Am I totally off-base here? Let us know in the comments!